Hogs say they won't sleep on the Tigers 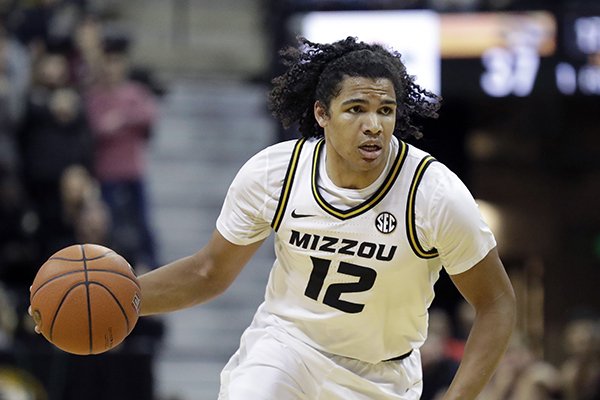 Missouri's Dru Smith brings the ball down the court during the second half of an NCAA college basketball game against Georgia Tuesday, Jan. 28, 2020, in Columbia, Mo. Missouri won 72-69. (AP Photo/Jeff Roberson)

COLUMBIA, Mo. -- The night before a road game, University of Arkansas Coach Eric Musselman likes his players to get up some shots at the arena where they'll be playing.

But the Razorbacks couldn't do that at Mizzou Arena on Friday night.

Someone else was playing there -- country music star Luke Combs.

With a concert in Mizzou Arena, the only time Arkansas could have a shoot-around there was 8 a.m. today before the 2:30 p.m. tipoff between the Razorbacks and Tigers.

Musselman sent his players a group text earlier this week saying he probably would cancel the early morning workout.

"Like 99% of the teams, if you told them that you have an 8 o'clock shoot-around slot, but you were going to let them sleep in, they're probably going say, 'OK, great,' " Musselman said. "They wouldn't want [to get up early]."

Count the Razorbacks among the 1% of teams that want to have an early practice.

Musselman said after he sent the group text, Razorbacks junior guard Mason Jones -- who spoke with his teammates -- called to say the players wanted to be at Mizzou Arena at 8 a.m.

"We wanted to get up and get our blood going, just get the schemes of the game, get the feel of the court," Arkansas senior forward Adrio Bailey said. "We made the choice to get up early."

"We dropped one at home, so going [to Missouri], we don't have any room for error and not to be prepared," Arkansas senior guard Jimmy Whitt said. "So if that's the only shoot-around time we can get, we're going to take it.

"We're going to wake up early in the morning and make sure we're all prepared. I think it's a team mindset. We just want to be as prepared as we can. If we can get a little extra time in before the game, we're going to take it for sure."

Illinois is ranked No. 20 in this week's Associated Press poll and projected to be an NCAA Tournament entrant, as is Florida.

When Musselman was at Nevada last season, Florida beat the Wolf Pack in the NCAA Tournament.

"I don't look at their record at all because No. 1, they're good at home, and No. 2, they've beaten some great basketball teams," Musselman said.

Missouri beat Florida and Georgia without 6-10 junior center Jeremiah Tilmon, who missed eight games because of a stress fracture in his left foot. Tilmon played off the bench Tuesday night at Texas A&M and had 2 points, 4 rebounds and 2 turnovers in 12 minutes in the Aggies' 68-51 victory over the Tigers.

"It's my understanding that [Tilmon] didn't hardly practice -- if at all -- prior to the Texas A&M game," Musselman said. "Now he's got a game under his belt. You get a couple of practices, you get extra reps, you're back at home."

Missouri junior guard Mark Smith, who has missed the last two games with a back injury, will be a game-time decision today, Martin said.

"Missouri is circling this game, saying this is a game that they're going to go win," Musselman said. "For us, it's a game that we've got to go try to figure out a way to win. I think you're going to see a great effort from both teams."

Arkansas is 4-1 this season after a loss, including road victories at Ole Miss and Alabama.

"After you drop one, you really don't want to come back and drop another one, drop two in a row," Whitt said. "That's been our mindset.

"We don't want to lose any games, but if we do end up losing, we definitely don't want to drop two in a row. So we have that extra chip on our shoulder, especially going on the road."

Musselman said the way the Razorbacks have bounced back from losses speaks to their commitment -- along with the players wanting to have an early shoot-round this morning rather than staying in bed a little longer.

"It says all the things that we've talked about, like way back in the summer that they're buying in," Musselman said. "That they have a high will to win.

"I think that they're showing maturity."