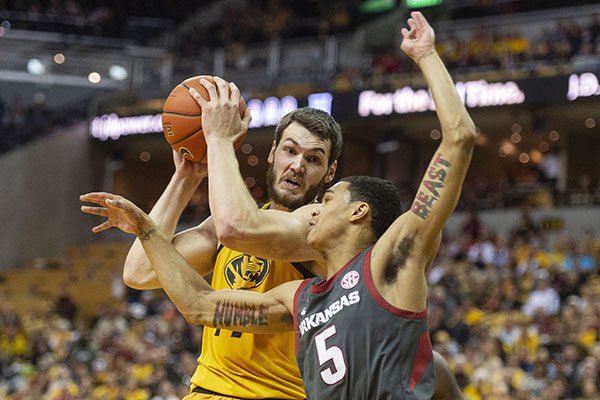 COLUMBIA, MO. -- Working overtime this week didn't pay off for the University of Arkansas basketball team.

Missouri beat Arkansas 83-79 on Saturday in Mizzou Arena before an announced crowd of 11,439 to hand the Razorbacks their second overtime loss in five days. Auburn beat Arkansas 79-76 in overtime on Tuesday night in Walton Arena.

It's the first time in 97 seasons the Razorbacks (16-7, 4-6 SEC) have suffered overtime losses in back-to-back games, according to the results in the UA media guide.

Arkansas had a one-point lead in overtime in both games.

"It's really disappointing when you have two games right there, primed to win, and you just don't come away with it," Razorbacks senior guard Jimmy Whitt said. "It's tough."

Arkansas Coach Eric Musselman has praised his team's effort all season, but sophomore forward Reggie Chaney -- who had a career-high 17 points and matched his career-high with 11 rebounds -- said that wasn't the case Saturday.

"They just played harder than us, point blank," Chaney said of what turned the game in the Tigers' favor. "That's really it."

"Quite honestly, they played harder than us all game," Whitt said. "I feel like they were more connected. It's real tough when you've got to look in the mirror and say, 'They outplayed us. I got outplayed.' "

Desi Sills scored a layup on a 2-on-1 fast break with an assist from Mason Jones -- who stole the ball from Tray Jackson -- to give Arkansas a 69-68 lead with 3:57 left in overtime.

Missouri regained the lead for good, 70-69, on two free throws by Mitchell Smith -- a junior forward from Van Buren.

Sills hit a three-pointer to pull the Razorbacks within 79-77 with 34 seconds left, but Xavier Pinson pushed it back to an 81-77 lead with two free throws for the Tigers with 16 seconds left.

Whitt missed a shot inside with nine seconds left, and the Hogs' fate was sealed.

Arkansas didn't have Jones -- a junior guard who came into the game averaging an SEC-leading 20.7 points -- for the final 3:26 of overtime after he fouled out for pushing Smith off with a forearm.

Jones was the first Razorback to score 30 or more points in three consecutive games with 34 against South Carolina, 30 at Alabama and 40 against Auburn.

"Mason Jones is a great player," said Smith, who had 8 points and 11 rebounds in 35 minutes off the bench. "He put up 40 last time. They were going to him, and I felt like I had to sit down and get a stop right there.

"He came off the screen and pushed off a little bit. I got the charge, and once we saw him go out of the game, we knew we were right there and had to win the game."

Jones was held to 17 points by Missouri after he came into the game averaging 22.0 ppg in SEC play.

"I thought their defense focused on him," Musselman said.

Missouri Coach Cuonzo Martin credited Pickett with helping keep Jones -- who shot 3 of 14 from the field and hit 11 of 14 free throws -- under control. He also had 1 assist and 4 turnovers in 36 minutes.

"It doesn't matter what a scouting report is, you just don't allow a guy to score like that," Martin said of the roll Jones was on. "Javon did a good job of embracing that challenge.

"Because when guys shoot a lot of balls, they'll get a certain amount of points. But you want the percentage to be low, and you don't want the assists to be high."

"You're not going to win a game when you put an opponent on the foul line on the road 44 times," Musselman said. "We could have played the Milwaukee Bucks tonight, and we couldn't have fouled them 44 times. We've got to learn how to defend without fouling, and it starts with being in a defensive stance."

Arkansas' starting big men -- the 6-8 Chaney and 6-6 senior Adrio Bailey -- both fouled out while playing 36 minutes and 29 minutes, respectively.

"They dribble-drived hard and attacked the bigs, got us in foul trouble," Chaney said. "We were reaching. We weren't staying low on defense. So they were exposing us there."

"I thought we had really bad shot selection," Musselman said. "I didn't think we shared the ball."

"We didn't cut hard enough in the first half, and we turned over the ball way too much," Musselman said. "In the second half, we played a little bit better with a little bit more flow."

Sills, a sophomore guard who scored 12 points, hit a layup with 34.2 seconds left in regulation to tie it 67-67. He was fouled by Mitchell Smith on the basket, but he missed the free throw.

Missouri then turned the ball over on a shot clock violation with 3.5 seconds left.

Junior guard Jalen Harris -- the Razorbacks' fastest player -- rushed the ball up the court and had a 30-foot running shot bounce off the backboard at the buzzer.

Missouri outrebounded Arkansas 52-35 and had a 16-11 edge in second-chance points.

"The fouls and the defensive rebounding," Musselman said of the key contributors to the loss.

Arkansas is 2-5 in its past seven games and is back on the road at Tennessee on Tuesday night.

UP NEXT Arkansas plays Tennessee at 6 p.m. Tuesday at Thompson-Boling Arena in Knoxville, Tenn.