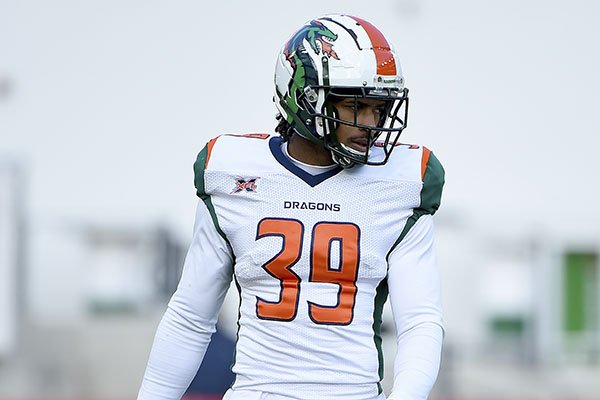 WASHINGTON -- Roughly a year after hanging up his University of Arkansas cleats, and five months after being waived by the New York Jets, Santos Ramirez is back in the game, this time playing football in the newly formed XFL.

With the task complete and whistle blown, he sprinted off the field.

"It felt good just to tackle again. It just felt good to get the chance to run down there and be a kid again," Ramirez, 23, said during a postgame interview with the Arkansas Democrat-Gazette.

Football in February is cold, and Saturday was no exception as the Dragons fell 31-19 to the Defenders. But there are hundreds of athletes eager to suit up, hoping to prove themselves on the gridiron again.

As a Razorback, Ramirez racked up 228 tackles, 5 forced fumbles, 3 interceptions and 2 fumble recoveries. He was twice tapped as a team captain.

Although he wasn't selected in the NFL Draft, he did suit up with the Jets only to be cut toward the end of the preseason.

"It was devastating," he said. "You put this work in, your whole life, for this opportunity. For it to be over with, and you don't know what's going to happen next, it can be kind of nerve-wracking."

Exiting the Big Apple, he moved to the Dallas area and became a forklift operator.

But he never gave up on returning to the gridiron.

Given a shot to play football in Seattle, he jumped at the opportunity.

"Honestly, it's really a blessing just to be back in there. To play the game that I love, there's nothing better than that," he said. "The dream is still alive."

The NFL remains the goal, he said.

"I think he's super valuable in the mix on our defense, and he's very important in our special teams as well, so he has to play a lot and he has to play well and he does."

"He's a great player. He comes to work every day," wide receiver Austin Proehl said."[Ramirez] loves ball, just like we all do, and wants to win, just like the rest of us."

Jordan Martin, a fellow safety, said Ramirez is a valued member of the squad.

"Santos, he works hard. He goes hard. You can never question his effort," Martin said. "Everybody looks at him as a leader."

On Saturday, Ramirez played before a crowd of 17,163 that included his mother and two younger sisters. Since the game was televised on ABC, his friends back in Arkansas were able to tune in as well.

Next week, Seattle has its home opener at CenturyLink Field, home of the Seahawks. While he's no meteorologist, Ramirez has a hunch what the weather will be like -- cloudy and wet.

"Seattle, it rains almost every day, man. Day and night, it's going to rain, man," he said.