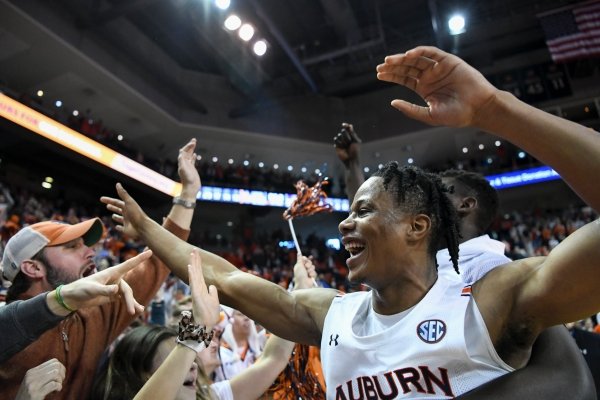 FAYETTEVILLE -- Auburn's ability to stick to its plan and rally, even in tough road games, has helped the Tigers pull into a three-way tie atop the SEC with eight conference games remaining.

The Tigers have rallied from deficits of at least 11 points in three of their past four games during their six-game winning streak.

Coach Bruce Pearl's club edged past LSU 91-90 in overtime Saturday to forge a tie with LSU and Kentucky at 8-2 atop the SEC.

Auburn rallied from a 16-point deficit against LSU at Auburn Arena but nearly blew a seven-point lead in the extra period before guard J'Von McCormick's floater from about 10 feet bounced off the rim and backboard and settled through the nets in the final second.

Auburn improved to 4-0 in overtime games.

"If you're going to win a game like that, against a team like that, you have to have special," Auburn Coach Bruce Pearl said. "We had a lot of special."

Auburn won its lone contest against LSU, but both teams have games remaining against Kentucky the rest of the way. Auburn and LSU appear to have easier schedules down the stretch, as Kentucky also plays Florida twice in its final eight games.

Auburn overcame a 19-point second half deficit to down Ole Miss 83-82 in double overtime in Oxford, Miss., on Jan. 28. One week later, the Tigers trailed Arkansas by 11 points with six minutes to play before rallying for a 79-76 win in overtime.

Pearl suggested his deep roster helps the Tigers hold up in late-game situations and overtimes.

"We play nine guys on a regular basis," Pearl said. "We've been able to wear people out."

CBS Sports released last weekend its top 16 seeds for the NCAA Tournament based on a 10-person committee's research, and Auburn as a 4 seed, was the only SEC team to make the preview.

Kentucky Coach John Calipari had a sarcastic response after Saturday's win at Tennessee on whether he had seen the top 16 bracket reveal.

Two of the league's top in-state rivalries will be played this week with the basketball versions of the Egg Bowl and the Iron Bowl.

First up is Mississippi State at Ole Miss tonight at 6 on ESPNU. The Rebels have won two in a row and playing much better since an 0-5 start to league play. Mississippi State started 0-3, but the Bulldogs have won five of their last six SEC games with one of the league's most experienced rosters.

Auburn guard J'Von McCormick had his No. 5 jersey torn midway through the second half at Arkansas and put on 55 to finish the game. After McCormick scored 10 of his 16 points against the Razorbacks in the second jersey, Coach Bruce Pearl said he'd like to see McCormick stay in No. 55.

It didn't happen. Back in his old No. 5 on Saturday, McCormick put Pearl's fears to rest by scoring 23 points on 7-of-15 shooting, including 5 of 10 from three-point range, in Auburn's 91-90 overtime victory against LSU to create a three-way tie atop the SEC. McCormick also had nine points and nine rebounds.

Ole Miss guard Breein Tyree, who climbed to No. 9 on the school's all-time scoring chart last week, was chosen as SEC player of the week by the league office Monday.

South Carolina's Jermain Couisnard, a 6-4 guard from East Chicago, Ind., averaged 23.5 points, 3 assists and 2 rebounds, including a career-high 28 points against Ole Miss, to earn SEC freshman of the week honors.

Only five two-game series in the SEC have been completed, and four of those wound up with sweeps. The only two-game set that was split came with Florida whipping Ole Miss 71-55 at home and losing 68-51 at Ole Miss on Saturday.

The Rebels have already been swept by LSU, which has a 6-0 mark against teams it will meet twice.

On the other hand is Vanderbilt, which is 0-5 against Alabama, Florida, Kentucky, South Carolina and Tennessee, the teams it will face twice.

The other sweeps: Kentucky over Georgia, South Carolina over Texas A&M and Texas A&M over Missouri.

One of the keys to winning the SEC regular season -- notching conference road victories -- has trended in favor of the teams currently near the top of the standings.

SEC tri-leaders Auburn, Kentucky and LSU are all 3-2 in league road games. Texas A&M, the only team to play six SEC road games thus far, is 3-3 away from College Station, Texas.

Alabama, Arkansas, Florida, South Carolina and Tennessee are all 2-3 in league road games.

Georgia, Missouri and Vanderbilt, all 0-5, are the only conference teams yet to win on the road. Ole Miss (1-4) and Mississippi State (1-3), the only team with five road games left, have one SEC victory away from home.

Vanderbilt snapped its 26-game regular season SEC losing streak with an exclamation point by outplaying LSU 99-90 last Wednesday. The Tigers, the last unbeaten team in league play, had won 10 games in a row, including six by four points or less, before tripping in Nashville.

"It's been a long time," Vanderbilt guard Saben Lee said after his 33-point game helped trigger the upset.

"Our morale ain't been bad," Stackhouse said. "You see our guys? Our guys don't hang their head. They come to work every day. They come to work and bring the same hard-hat mentality that they played with tonight. We told them if they continue to do that things will turn.

"I feel like if we continue to play and do the things that we do we can have more nights like this. This is not the end-all for us. This is not what we want to accomplish, to win one game in the SEC. Glad that we did. Now we got that monkey off our back and now y'all can write something else. But now we start talking about building the team that we're trying to build."

The University of Arkansas is 1-3 in overtime games this season, and the Razorbacks appear to be fatigued when they get into the extra session if shooting percentage is any indication.

The Razorbacks entered Saturday's overtime loss at Missouri shooting 5 of 18 (27.8) in overtime periods. In Arkansas' lone overtime victory, 62-61 at Georgia Tech, the Razorbacks did not score in the extra period until Mason Jones banked in a three-point try at the buzzer.

All of Ole Miss' SEC victories have come by 10 or more points, including back-to-back spankings of South Carolina and Florida last week.

The Rebels have won back-to-back games for the first time since they followed an 83-76 victory over Southeastern Louisiana on Dec. 21 with an 80-63 victory over Tennessee Tech on Dec. 29.

Vanderbilt found an oasis last week in a sea of anguish since the loss of the SEC's leading scorer Aaron Nesmith early in league play.

The Commodores' Saben Lee (33) and Maxwell Evans (31) both scored 30-plus points against LSU last week. They became the first teammates in the SEC to have 30 or more points in the same game since Kentucky's Patrick Patterson (33) and Jodie Meeks (32) did it against Tennessee State on Dec. 22, 2008.

Kentucky guard Emmanuel Quickley is ranked fifth in the nation with a 92% rate (104 of 113) from the free-throw line. Quickley drove and drew contact repeatedly down the stretch in the Wildcats' 77-64 victory at Tennessee on Saturday. Quickley went 6 of 7 at the line.

Quickley and Missouri's Dru Smith, who is 87 of 96 (90.6%) are the SEC's two representatives among 14 qualifying players who are making 90% of their free throws shots in Division I.