Hogs wait for word about Joe 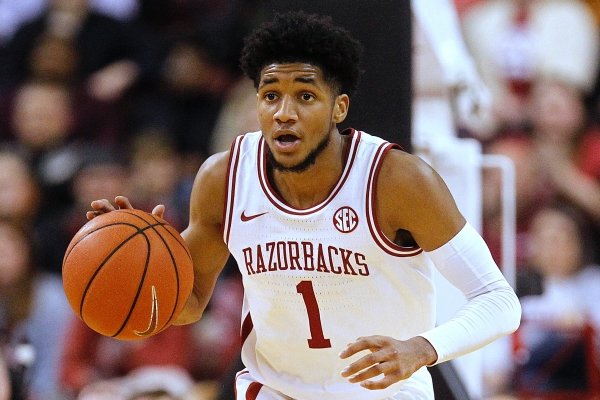 Arkansas’ Isaiah Joe (1) runs the ball down the court during the second half of the Razorbacks' 72-68 win over Valparaiso on Saturday, Dec. 21, 2019, at Simmons Bank Arena in North Little Rock.

FAYETTEVILLE -- University of Arkansas guard Isaiah Joe posted a video on his Twitter account on Saturday that showed him sitting on a chair in the lane on the court of the team's practice facility and putting up a shot.

It's part of the rehabilitation process for Joe after he underwent arthroscopic surgery on his right knee last Tuesday.

"Ready to go to war with my brothers," Joe tweeted with a fingers-crossed symbol and #bounce back.

Arkansas Coach Eric Musselman said he still doesn't have a timetable for when Joe will resume playing.

"[Trainer] Mark [O'Neal] said it's still too early," Musselman said. "He said he should know more on Thursday."

Joe, who is averaging 16.0 points per game, didn't travel with the Razorbacks to Knoxville, Tenn., where they're playing Tennessee tonight.

"We're trying to do everything we can to eliminate any swelling by flying, and for him to be able to get as much rehab as he can by staying at home," Musselman said. "His attitude's been really good. He's doing everything he can.

"He's been in the training room a lot. Having said that, we've just got to continue through the rehab and see where it takes us."

Vescovi and Plavsic -- a transfer from Arizona State -- both joined the Vols after the fall semester.

Plavsic initially had his waiver for immediate eligibility at Tennessee denied by the NCAA before the season. But after an appeal, the NCAA Committee for Legislative Relief ruled that Plavsic was eligible to compete immediately. He missed the first 15 games.

Arkansas had hoped Connor Vanover, a 7-3 transfer from California, would be ruled immediately eligible, but the NCAA denied his waiver and subsequent appeal.

"They did a great job of continuing to pursue his eligibility, and somehow he got eligible at a unique time," Arkansas Coach Eric Musselman said. "Then the guard from Uruguay [Vescovi], I mean he's an incredible pickup. A great job recruiting him.

"They found a freshman who's having a huge impact. I give their staff a ton of credit for finding him. To get a mid-year kid who's a freshman and is that talented, hat's off to [Tennessee] Coach [Rick] Barnes."

"A lot of things have adjusted for him I think," Barnes said of Vescovi. "For one, he has gotten himself into better shape. That's where it started.

"There's no doubt he can shoot the ball, he has a great feel for the game, he's competitive, he sees everything really well. He knows he's going to have to get better defensively.

"I think some of his breakdowns [against Kentucky last Saturday] were because of fatigue. But he's going to have to improve there, and he will.

"We're not as cosmetically pleasing when they're both in there," Coach Eric Musselman said last week playing both forwards at the same time.

With the Razorbacks going 0-2 last week with overtime losses Auburn and Missouri, Musselman didn't rule out the possibility of making a lineup change.

The most logical move, if Musselman decided to make one, would be to start 6-2 guard Jalen Harris for Bailey. It seems unlikely Chaney would come out of the lineup after he had a career-high 17 points at Missouri and matched his career high with 11 rebounds.

Tennessee Coach Rick Barnes said he hopes the Vols will pick up their pace.

"We have told them all that if they get a rebound that they can go with it."