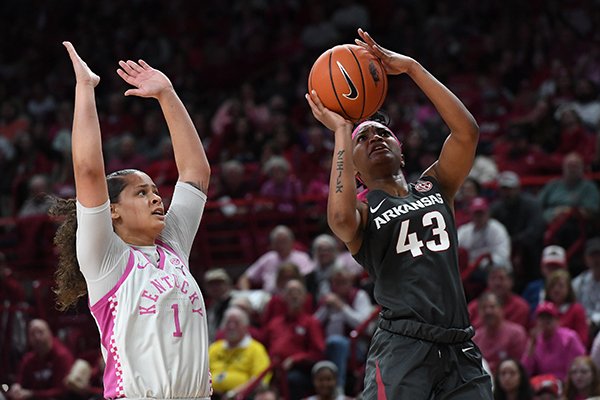 FAYETTEVILLE — Unlike those from the technology-flawed Iowa caucus, Mike Neighbors has confidence in the returns.

Of the 5,638 attracted to Walton Arena for Arkansas’ 103-85 SEC Sunday success over No. 15 Kentucky, Arkansas’ women’s basketball coach predicts an appreciable portion returning for his Razorbacks’ final two home games Feb. 20 and March 1 against SEC rivals Tennessee and LSU.

“I would be shocked if they didn’t just based on the returns I heard,” Neighbors said. “Especially from first-time people.”

It marked Arkansas’ largest home women’s basketball crowd since 6,149 were listed on Jan. 30, 2011, as attending the game against a 34-3 Tennessee team in the late Hall of Famer Pat Summitt’s second-to-last year coaching the Lady Vols.

Neighbors chose pinning peak attendance on an ideally timed 3 p.m. Sunday game against a very good but beatable Kentucky team vs. a 7:30 Thursday night game against a South Carolina Gamecocks team beyond most everyone’s ken.

Though in the powerful SEC, coach Dawn Staley’s Gamecocks, 21-1 overall and 10-0 in the SEC, seem in a league of their own.

“There were four spontaneous (and prolonged) Hog calls,” Neighbors said. “It was good to hear them break out without somebody saying, ’Stand up and call the Hogs!’ That was cool.”

The Razorbacks, 19-5, 7-4 in the SEC, rewarded their excited crowd with an exciting performance. Led by Alexis Tolefree, 30 points, and Chelsea Dungee, 24 points, they routed a strong Kentucky team (18-5, 7-4) still ranked 18th and ahead of Arkansas.

They should be, Neighbors hopes, Arkansas final home games for 2019-20.

Despite an incredible three-victory run to the SEC Tournament final last season, Arkansas’ 6-10 SEC regular season left it playing at home in the WNIT instead of in the NCAA Tournament.

At 7-4 in the league, Arkansas has, starting Sunday at Ole Miss, five to play completing the 16-game SEC season before the SEC Tournament in Greenville, S.C.

“I think we need to win more to feel good about it,” Neighbors said. “Eight SEC wins has been pretty much a standard for the NCAA. Nine is automatic. It would be nice to go to Greenville playing on house money feeling you already had your at-large bid and playing for a (NCAA Tournament) seed.”

CORRECTION: An earlier version of this story had the score incorrectly listed as 103-58. It has been changed to reflect the correct final score of 103-85.