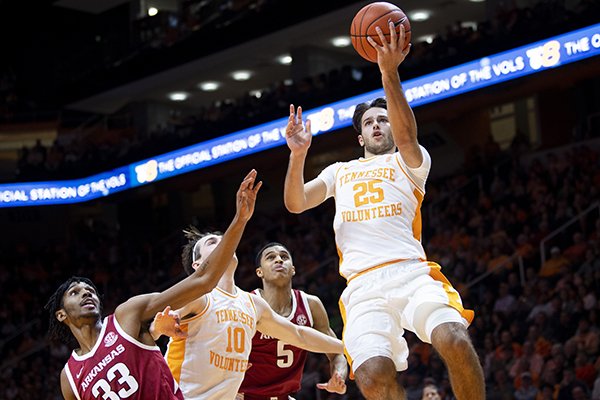 KNOXVILLE, Tenn. -- University of Arkansas Coach Eric Musselman held leading scorer Mason Jones out of the starting lineup in Tuesday's 82-61 loss at Tennessee and sat him for a long stretch at the end of a rough game.

"We didn't start him tonight to try to give us some pop off the bench," Musselman said. "We haven't played very well to start games. We've been playing uphill. We played uphill again."

Jones scored nine points, 11 below his season average, and he struggled with his shot. The 6-5 junior went 1 of 10 from the field, 1 of 5 from three-point range, and converted 6 of 6 at the free-throw line. He was held in single figures for the fourth time this year and the first time since scoring 1 point in a victory over Vanderbilt on Jan. 15.

Jones was requested for postgame interviews but was not made available.

Asked if there was something going on with Jones, since the two were involved in a couple of testy exchanges in Saturday's loss at Missouri, Musselman said, "No, I mean he went 1 of 10. So we played other guys."

When asked later about what he said to Jones after not playing the final 12-plus minutes, Musselman responded, "I don't think Jalen Harris did either. I didn't think either one of them played very well. So that's what you do."

Musselman said the Vols "did a great job defending him," and Tennessee Coach Rick Barnes said Jones was a big focus for his defense.

"We were just really going to give him a lot of attention and make his catches tough," Barnes said. "When he gets it and gets going he can be a load."

Starters for the Razorbacks were guards Harris, Desi Sills and Jimmy Whitt and forwards Adrio Bailey and Reggie Chaney. It marked the first time that quintet had been paired in the starting lineup all season.

Jones checked in at the 17:07 mark for Harris with Tennessee ahead 7-3 and got off to a difficult start. He missed his first five shots, lost a ball out of bounds and was forced to call a timeout after getting trapped on the baseline in his first few minutes. Jones finished with 2 rebounds, 2 assists and 3 turnovers in 24 minutes.

Jones' lone made shot came on a three-pointer from the right wing with 5:57 left in the half that cut the Hogs' deficit to 27-16. Jones scored seven consecutive points, the last four on free throws for Arkansas, which trailed 40-23 at halftime.

Jones made a pair of free throws at the 15:59 mark of the second half, did not score again, then came out for good with 12:57 remaining.

Arkansas trailed at halftime for the seventh consecutive game against an SEC opponent. However, none of the Razorbacks' deficits approached the 40-23 disadvantage facing them against the Volunteers at halftime.

Tennessee guard Jordan Bowden had another big game against the Razorbacks. Bowden scored 16 points on 7-of-16 shooting, including 2 of 7 from three-point range.

The 6-5 guard had been 9 of 12 from the field, including 5 of 6 three-point range, in two previous games against the Razorbacks.

Tennessee big men John Fulkerson and Yves Pons had two of the game's best individual efforts minutes apart in the second half.

Fulkerson flew into the lane, grabbed a missed jump shot from Davonte Gaines with two hands and fiercely slammed it through the rim for a 53-34 Tennessee lead. A couple of minutes later, the Vols got three tries. Jordan Bowden missed a three-point try near the end of the shot clock and Gaines' tip-in try came off the rim. Pons cleaned up the free ball with a powerful put-back dunk for a 57-34 lead.

The teams combined for a rapid-fire series of turnovers midway through the first half that bordered on comical.

Neither team scored between the 14:33 mark and the 10:50 mark, and in that span the Razorbacks committed five turnovers while the Volunteers coughed it up four times.

Among the Arkansas transgressions was an offensive foul called on a screen against Desi Sills and a charging call against Mason Jones. Ethan Henderson, Jimmy Whitt and Jalen Harris all had steals during that stretch for the Hogs, while Devonta Gaines had two and John Fulkerson one for Tennessee.

Tennessee, the SEC's top shot blocking team with 5.9 per game, and 6.2 per SEC game, delivered on the swat count again with six blocked shots.

Yves Pons, whose 2.7 blocks per game lead the SEC, had one to carry on his streak of having a blocked shot in all 24 games this season.

Tennessee guard Santiago Vescovi felt like he was running out of time on an inbound pass on the Arkansas baseline early in the game. Instead of calling timeout, Vescovi bounced the ball off the legs of jumping Arkansas guard Desi Sills, causing the carom to go out of bounds. After the play, Vescovi reached out a hand as if to apologize and Sills gave him a sportsmanlike tap.

Both Arkansas starting forwards had two fouls before the under-12 media timeout in the opening half. Adrio Bailey picked up two quick ones -- at the 16:38 and 15:32 marks -- after contributing an early steal and one missed jumper. Reggie Chaney scored inside, had three rebounds an assist and a turnover when he got his second foul at 13:12 and was pulled out.

Tennessee won its third game in a row in the series and took a 22-20 lead in the all-time series, which dates to 1936.

The Volunteers, who beat Arkansas 106-87 here last Jan. 15, is 13-4 against the Razorbacks in Knoxville, Tenn. Arkansas hosts the Vols on Feb. 26 at Walton Arena.

Kleine on the call

Kleine, who is serving as an analyst in spot duty this season, might have been filling in for Barry Booker, who was chastised for making an inappropriate comment during Saturday's Arkansas at Missouri game.

Kleine said he never played a game in Thompson-Boling Arena but suffered "one of the most heartbreaking losses of my career" in the Vols' Stokely Athletic Center. The heartbreak came in a 65-63 loss to No. 1 seed Louisville in the Sweet 16. Arkansas had defeated the Cardinals twice in the NCAA Tournament in the previous four years: 73-62 in 1979 and 74-73 in 1981 on U.S. Reed's half-court buzzer beater.