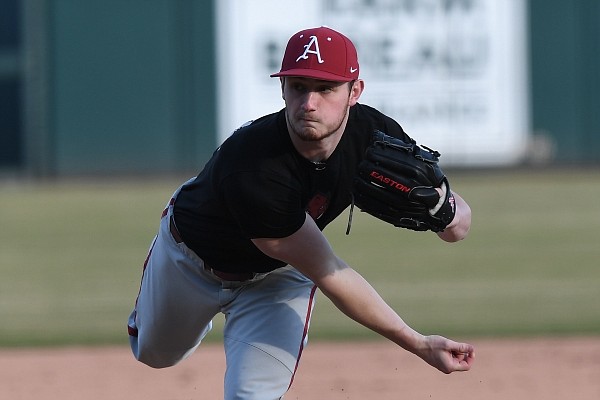 Freshman pitcher Kevin Heinrich throws a pitch during an Arkansas baseball scrimmage on Monday Jan. 27, 2020 at Baum-Walker Stadium in Fayetteville.

FAYETTEVILLE — Kevin Heinrich was in the building next to where everything happened.

He was on a bathroom break when he heard what he thought was fireworks exploding. Then the fire alarm sounded in Marjory Stoneman Douglas High School in Parkland, Fla.

Heinrich followed the fire drill procedure when in a restroom. He exited and made his way down a stairwell. That’s when he ran into his mother, Marilyn Rule, a physical education teacher at the school who was scheduled for a planning hour that period.

“I was walking by and we saw each other,” said Heinrich, a freshman pitcher entering his first season at Arkansas. “She was asking me, like, ‘How’s your day? What’s going on?’ Normal mom stuff.

“That’s when we heard another three rounds go off.”

“Everyone started running,” he said. “It was crazy.”

Heinrich’s father, Jeff, a sergeant at the Coral Springs Police Department, was off duty on the day of the shooting - Feb. 14, 2018. He very much enjoyed maintaining the school’s baseball field in his spare time, Kevin says.

He was pampering the infield ahead of the team’s practice that afternoon when he caught wind of the fire alarm echoing from the school. Normal fire drill, he thought. Students, though, began running from the building, and he immediately dropped everything.

“He met someone in the parking lot of our school,” Kevin said. “He took one of the shot victims to the baseball locker room, healed up his wound, grabbed a bulletproof vest and a sidearm from one of his captains and started clearing the building.”

The student, who suffered a gunshot wound to his ankle, was able to provide Heinrich with a description of the shooter, what he was wearing, and which building he was in. Heinrich then relayed that information to dispatch.

“I wasn’t reunited with my wife and son probably until 10 p.m.,” he told reporters days after the shooting. “You can only imagine. I don’t think I really need to explain how it felt and what it was when I got home and got to see them safe.”

In all, 17 people were murdered. Seventeen more were injured. The memory and the horror of the day will live forever in the minds of those involved. The first anniversary of the shooting was rough, Heinrich said in an interview on Arkansas baseball’s annual media day.

It is becoming easier to come to grips with as time moves on, though. Friday, the day of the Razorbacks’ 2020 season opener against Eastern Illinois, will mark two years since the shooting. The Heinrichs will be in Fayetteville together.

“I’m not going to try to let (the emotions overcome me), but there is a possibility,” Kevin said. “It’s just a part of me. It’s what I go through. It’s part of my life, and it’s who I am now.

“It’s definitely changed me for good, I believe. It’s helped me understand things a little better in life. Don’t take life for granted. You can’t control what you can’t control. You’ve got to live life to the fullest.”

Heinrich’s roommates at Arkansas, freshman pitchers Evan Gray and Nathan Rintz, say Heinrich was an open book about his recent past in the early stages of their friendship. He sat down and talked about everything, sharing his harrowing story with the Illinois natives.

Gray admitted he isn’t sure how much he would be willing to divulge if he had gone through a similar experience.

“To meet a guy who’s been through it is such a different feeling, just knowing how they felt during the situation,” he said. “He was letting us ask questions about it if we had them. … For him to be super open with us was pretty cool.

“He obviously felt a connection right away. That was nice.”

Catcher and team captain Casey Opitz, who has caught the freshman in preseason practices a couple of times, noted Heinrich, in the time he has gotten to know him, is a strong kid.

A native of Centennial, Colo., Opitz said a shooting occurred at his rival high school when he was a freshman. It’s an absolute tragedy, he added.

“It’s something we’ve got to live through,” Opitz said. “He’s working with it. He’s taking his past in stride, and it’s going to help him in the future going through something like that and being able to grow through that.”

This preseason, Heinrich says he had his good and bad days. When he pitched well his fastball location was on point and off-speed pitches were sharp. He has been working on adding a slider to his repertoire.

As of late January, Heinrich was unsure what his role would be with the Razorbacks this season. He’s aiming to be a mid-week reliever, and he would be “100 percent thrilled" with that task.

When Heinrich committed to Arkansas in July 2018, former Arkansas pitching coach Wes Johnson played a key role. It was a heartbreaker for him when Johnson departed for the Minnesota Twins prior to the 2019 season.

But taking in the Razorbacks’ back-to-back College World Series appearances was very reassuring. He said he made the right decision.

“I love being in the hills and mountains here,” said Heinrich, who models his pitching style after New York Mets pitcher Noah Syndergaard. “It’s really flat where I’m from, so it’s good to see change. I got to see my first fall, so that was pretty cool.

“Getting here and meeting all the guys, it’s very nice. It’s a great environment to be in.”