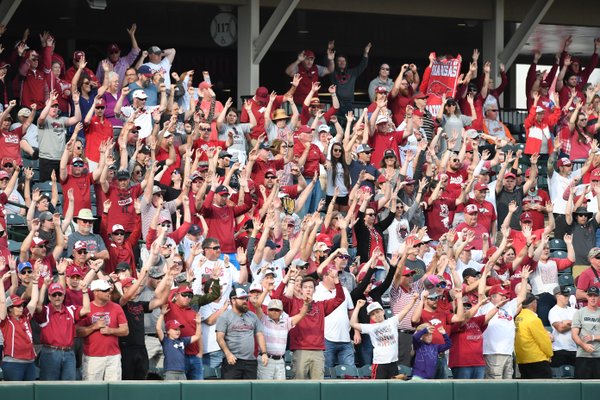 Image from Arkansas' win over Tennessee Sunday April 28, 2019 at Baum/Walker Stadium in Fayetteville. The Razorbacks start the 2020 season against Eastern Illinois today.

Kevin Kopps comes in to close out the game for the Razorbacks.

A leadoff double by Cole Austin is wasted as EIU pitcher Blayke Cutts retires the next three batters in the Arkansas order to end the eighth.

EIU threatens after a hit-by-pitch and a pinch hit single, but Denton gets a two out flyout from leadoff hitter Grant Emme to retire the Panthers in the eighth.

After Webb and Franklin were retired to start the seventh inning, Kjerstad blasted his second home run of the game. This time Kjerstad just snuck the ball in front of the left field foul poul. Matt Goodheart walked and after a wild throw from the EIU pitcher to the first baseman the Panthers elected to intentionally walk Casey Martin. The Hogs have runners on first and second with two outs. Opitz grounds out to first and that ends the Razorback threat in the seventh.

Grant Emme leads off the inning with a single. Trey Sweeney grounded out to Noland, Emme moved up to second. Pena flied out to right, Emme moved up to third. Matt Mackey grounded to Martin at short and the ball went right underneath his glove. Emme scored on the error and Noland's day is done. His final line: 6.2 IP< 2 H, 1 R, 0 ER, 1 BB, 11K.

Marshall Denton comes in as the first man out of the Razorback bullpen today. Denton retires the only batter he faced in the inning and the Hogs are up to bat.

The Razorbacks leave two on after Robert Moore flies out a step short of the warning track in right field. Six innings are complete and Connor Noland is going back out for the seventh. He's at 73 pitches.

Noland retires EIU in order and earns another strikeout. The punch out was his 11th of the game and is a new career high for Noland.

With two outs Braydon Webb gets the Razorbacks first hit since the second inning. Then the next pitch after a mound visit Christian Franklin puts a ball into the seats beyond the Razorback bullpen. Heston Kjerstad follows Franklin's home run with one of his own into the EIU bullpen in right. Goodheart flies out to the warning track in left to end the inning.

EIU goes in order. Noland strikes out two and ties a career high with ten strikeouts. He's at 64 pitches through five innings. Van Horn said the starting pitchers will be on a pitch count of around 75 pitches. Nobody is in the Razorback bullpen so I'd expect him to come back out for the sixth.

Connor Noland sets down the Panthers in order striking out two. That's eight strikeouts for Noland through four innings. His career high is ten against Tennessee last year.

Braydon Webb flies out to single. Franklin follows with a walk. Kjerstad is retired after grounding out to second. Franklin moves up to second. EIU first baseman Ryan Ignoffo had an opportunity to turn a double play, but bobbled the ball. Goodheart strikes out after being ahead in the count 3-0. Good job by Klein to come back and get Goodheart to end the Razorback threat in the third.

Noland retires the first two batters of the inning. The number nine hitter Dane Toppel walked on a close 3-2 pitch. During the next at-bat Toppel got too far off the first base bag and Opitz threw over and picked him off. After three Connor Noland has faced the minimum.

Casey Martin tries to bunt for a single, but is thrown out. Casey Opitz struck out swinging. Cole Austin singles up the middle on a ball that was fielded by the EIU shortstop, but he couldn't make a good throw. Jacob Nesbit then singled up the middle and put runners on the corners for the Hogs. Robert Moore, in his first at bat as a Razorback, swung at the first pitch and grounded out to first.

Connor Noland makes quick work of the Eastern Illinois lineup, striking out the side.

Braydon Webb works a lead off walk. EIU pitcher Will Klein then tries a pickoff throw to first, but throws it away. Webb advanced to second base. The next batter Christian Franklin strikes out swinging. Heston Kjerstad then grounds a ball through the left side of the field to give Arkansas an early 1-0 lead. Matt Goodheart grounds into a double play, but the Razorbacks lead 1-0 after one inning.

Grant Emme lead off the game with a 1-1 single through the right side. Noland responded by striking out the next two batters. Emme did steal second on the second strikeout. Then with two outs Emme tried advance on a ball in the dirt and was thrown out by Opitz at third with a perfect throw.

There is a slight wind blowing left to right across the field. Dave Van Horn said that Eastern Illinois' starting pitcher Will Klein can throw it 95 mph. With the cold weather I'd be surprised to see anybody throw it that hard today. For it to be a 2:00 p.m. start and 40 degrees, there are quite a few people at the ballpark today. Van Horn and Eastern Illinois coach Jason Anderson have met at home plate and we're just about set for opening day at Baum-Walker stadium.