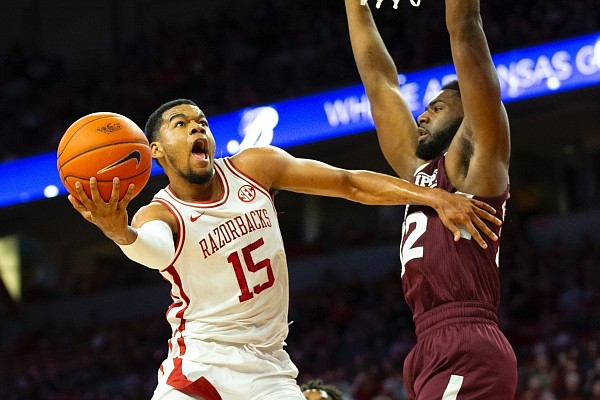 Arkansas Junior Mason Jones (15) going up the the basket against Mississippi State's KeyShawn Feazell (22) at Bud Walton Arena, Fayetteville, on February 15, 2020. Go to nwaonline.com/uabball/ to see more photos from this game.

FAYETTEVILLE — Arkansas guard Mason Jones reverted back to the player Saturday against Mississippi State who was firmly rooted in Southeastern Conference player of the year conversations less than two weeks ago.

For the sixth time in a breakout junior season and eighth time in his Razorbacks career, Jones surpassed the 30-point mark. He finished with a game-high 38 points, bouncing back from a pair of inefficient performances against Missouri and Tennessee.

But he and Arkansas were dealt another agonizing loss.

With the Razorbacks up 77-76 with 11 seconds to play following a missed 3-pointer from Jones, Mississippi State forward Abdul Ado, who had not scored in the first 39-plus minutes of the game, tipped in an errant Tyson Carter runner with 0.6 seconds remaining to give the Bulldogs a much-needed win - 78-77.

Joyous cheers and yelling filled the Mississippi State locker room shortly after the final buzzer sounded. Bulldogs coach Ben Howland entered the postgame interview room not in his in-game suit, but in baggy sweats and a hoodie.

"We had a good celebration in the locker room and I got a little wet," he said.

The Arkansas locker room, understandably, was the polar opposite. Razorbacks coach Eric Musselman noted that not a lot was said when he addressed the team. Jones, too, was at a loss for words at times in his stint at the dais.

Arkansas, which entered the weekend on the NCAA Tournament bubble, according to ESPN bracketologist Joe Lunardi, stormed back from a 17-point second-half deficit to take a three-point lead late. All it needed was one stop to get back on track following a trying three-game stretch.

"It hurts," Jones said. "To see our guys fight so hard to come back from down 17 in the second half, knowing people probably thought we was out, and us fighting and us losing on a buzzer beater is sickening.

"Right now I’m in shock. This is probably the worst feeling I’ve had all year, knowing we fought so hard and we were so close. That’s probably the bottom line of our season: We’ve been so close."

The loss to Mississippi State was Arkansas' fourth by one possession this season, and third in Bud Walton Arena, where the Razorbacks are now 7-8 in their last 15 SEC games dating back to the 2018-19 season.

Bulldogs forward Reggie Perry carried the visitors in the early going, mixing in a midrange jumper with scores around the rim, but it was guard Tyson Carter, who scored just three points on Tuesday in the blowout loss at Ole Miss, who was Mississippi State's most reliable offensive weapon.

He scored 26 points, two shy of matching a season high set in Game 2 against Sam Houston State. Carter was an efficient scorer, knocking down 8 of 14 shots and 8 of 10 attempts at the line. He scored six of the Bulldogs' last eight points, contributing in a major way to what Musselman described as the toughest stretch of his college coaching career.

Jones, again, was terrific for the Razorbacks, hitting 9 of 17 shots. He also connected on 18 of 21 at the free throw line. The 18 makes are the third most by an Arkansas player in program history, and the most since 1972, according to HogStats.com.

The junior was rolling on an individual level, but the Razorbacks found the game quickly slipping from their grasp in the second half thanks to DJ Stewart's eight timely points. That's when Desi Sills rose to the occasion and provided a lift to complement Jones.

Sills, who after missing his first three shots in the game was 2 of his last 17 dating back to Tuesday's loss at Tennessee, erupted for 15 critical second-half points. He was in a zone, playing with supreme confidence.

With 1:45 to play, Sills buried a left-corner 3 to give Arkansas a 75-72 lead. Bud Walton Arena exploded. Then came two of the more crucial mistakes in the game, both by junior guard Jalen Harris.

Following Sills' 3, Harris fouled Carter on the perimeter. He knocked down two free throws to cut the Bulldogs' deficit to 75-74, and on the Razorbacks' next possession, Harris dribbled toward the free throw line, left his feet, spun and attempted to find a teammate on the left wing.

Carter stepped in front of the pass and threw down a dunk on the other end.

"The effort was phenomenal," Musselman said. "We have no margin for error. I’ve been saying it since … We had some errors, and it cost us the game."

Jones, strapped with an ice pack on his ailing right shoulder following the game, said he still believes Arkansas can climb out of its current hole. The Razorbacks have lost seven of their last eight in league play, but they owe a few teams in their second meeting, including Missouri, Tennessee and LSU, he noted.

"We are in a must-win situation now," Jones added. "I want to go to the tournament this year. That’s everybody's goal in the locker room, but we’re eating ourselves up right now. We’re losing by one. We get beat by 22 or 24, we lose by two in overtime. We lost by four in overtime. All the games we should win, we’re just not finishing.

"I don’t want people to think that we don’t have enough talent or anything. We have the talent. We just have to finish games. Once we start finishing games we are going to be right in the position we want to be."