Gonzaga tunes up for Hogs with wild walk-off win 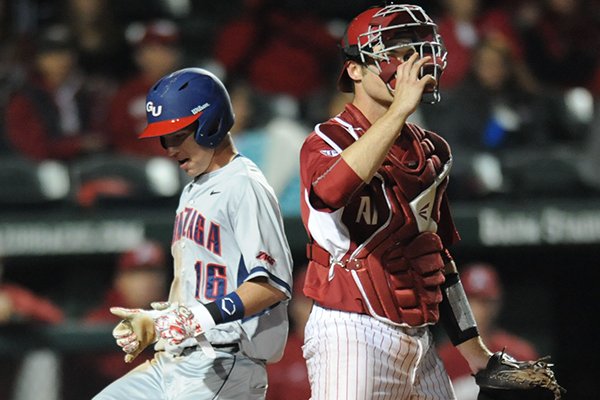 FAYETTEVILLE — No. 5 Arkansas’ next opponent will enter this weekend after a wild ninth-inning win on Monday.

Gonzaga coughed up a 2-0 lead with two outs in the top of the ninth inning, but rallied for three runs in the bottom half to down New Mexico 5-4 in the Sanderson Ford Classic in Surprise, Arizona.

The Bulldogs (2-2) won the game on a two-out errant throw to first that allowed the tying and winning runs to score after the Lobos loaded the bases via a trio of walks.

Ernie Yake scored all the way from second on a throw that was up the first base line.

"That's not how we would have scripted that one out, but we are happy to leave with a win," Gonzaga coach Mark Machtolf told gozags.com after the game. "That kind of resilience will serve us well going forward. We are excited to get back on the diamond this weekend down at Arkansas.”

The Razorbacks and Bulldogs will meet in a four-game series beginning Thursday with a 3 p.m. game at Baum-Walker Stadium. Gonzaga leads the all-time series 5-3 and has won four straight against Arkansas, including a 3-0 victory in 2013 in Surprise.

The Bulldogs also swept a three-game series in Fayetteville (6-2, 15-5 and 15-10) in 2016 against the only Dave Van Horn team that did not make the NCAA Tournament in his 17 years at Arkansas.

The Razorbacks swept Eastern Illinois while outscoring the Panthers 29-5 over the weekend. BYU dropped Gonzaga 7-1 on Friday at the tournament held at the Kansas City Royals’ spring training facility.

The Bulldogs bounced back to down No. 25 Oregon State 10-4 as Ryan Sullivan had four hits and a 3-run homer on Saturday before the Beavers won a rematch 5-1 on Sunday.

“Gonzaga is definitely going to be a step up in competition,” Van Horn said. “They beat Oregon State pretty good and Oregon State is a good team this year.

“So I think that this weekend, we definitely got to see what we needed to see, got the first weekend under our belt. Still going to try to figure out some things with our pitching. The lineup is kind of set, but saw some good things from some guys off the bench.”

Sophomore starters Connor Noland - named SEC pitcher of the week - and Patrick Wicklander got wins Friday and Saturday, respectively, while combining for 11 2/3 scoreless innings. The duo impressed former Illinois All-American pitcher Jason Anderson, who was drafted by and pitched for the New York Yankees.

“I am looking at it and it’s amazing,” said Anderson, EIU's coach. “Last year they had (Isaiah) Campbell, but right behind him were these two freshmen. To be in that position and go 46-20 like they did is not only a testament to what (Van Horn) is doing at Arkansas but to those two guys, and now he has given the keys to the car to them and they are ready to step up and perform and take it to the next level.

“That is what I did when I was a freshman. I made a big jump between my freshman and sophomore years. I learn how to really compete, and my sophomore year I was ready to do some damage.”

Freshman Blake Adams started Sunday and was one of five Razorbacks pitchers used in the game.

“Don’t know yet,” Van Horn said of his rotation for Gonzaga. “But we have four starters. Probably won’t be able to answer that until at least Tuesday.”

Senior left hander Mac Lander (6-4, 5.06 ERA last season) also pitched six scoreless innings in the season opener while fanning nine against BYU before the Cougars exploded for six runs in the eighth against the Bulldogs' bullpen.