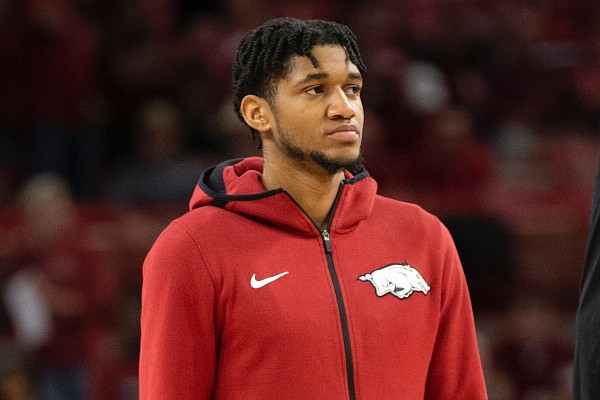 GAINESVILLE, Fla. — Arkansas guard Isaiah Joe won’t play Tuesday night against Florida, but Razorbacks coach Eric Musselman said the sophomore is getting closer to returning to the lineup as he continues to recover from knee surgery.

Joe was able to practice with the Razorbacks on Monday before they flew to Gainesville, Musselman said, and he traveled with the team.

“He did contact even [in practice],” Musselman said after the team arrived at its Gainesville hotel. “So now we just want to do the right thing and have some patience and let him get a couple practices under his belt and go from there.”

Joe, who is averaging 16.0 points and still leads the Razorbacks with 72 3-pointers despite missing five games, underwent arthroscopic debridement surgery to his right knee on Feb. 4. The term “debridement” refers to fragments being removed from the knee.

“I don’t know,” Musselman said when asked if Joe might be able to play on Saturday against Missouri in Bud Walton Arena. “We’ve just got to see. We don’t know how his knee is going to react tomorrow or anything after practicing today.”

Joe initially injured his knee on Jan. 11 at Ole Miss when he scored 34 points to lead Arkansas to a 76-72 victory.

Musselman said Joe then aggravated the injury in the team’s first game against Mississippi State, when the Bulldogs beat the Razorbacks 77-70 loss at Humphrey Coliseum on Jan. 22.

Joe sat out the next game when the Razorbacks beat TCU 78-67 on Jan. 25 with what Musselman said was knee inflammation.

Joe then played 36 minutes off the bench and scored 16 points when South Carolina beat Arkansas 79-77 on Jan. 29.

Joe returned to the starting lineup at Alabama on Feb. 1, but went scoreless in 21 minutes and was 0 of 3 from the field — all on three-pointers — in the Razorbacks’ 82-78 victory. It was the first time in 54 games Joe has played for Arkansas that he didn’t score.