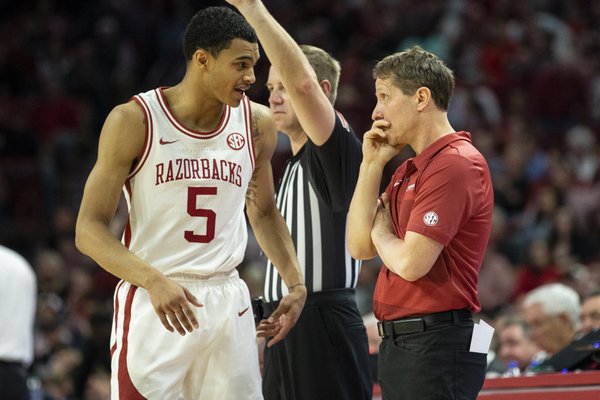 Arkansas Junior Jalen Harris (5) talking to coach Eric Musselman during at time out against Mississippi State, at Bud Walton Arena, Fayetteville, on February 15,2020

FAYETTEVILLE -- The University of Arkansas and Mississippi State basketball teams have identical 16-9 records, but they're trending in different directions.

The Bulldogs are on the upswing while the Razorbacks are in a tailspin.

The Bulldogs improved to 7-2 in their past nine SEC games, and they are now sixth in the conference standings at 7-5.

Arkansas fell to 1-7 in its past eight SEC games and is tied for 10th in the conference standings with Ole Miss at 4-8.

Despite the Razorbacks' struggles over the past month, ESPN still had them as one of the last four teams in the NCAA Tournament field prior to the Mississippi State game.

Asked on Twitter on Friday what Arkansas needed to do to keep its spot in the NCAA Tournament, ESPN bracket expert Joe Lunardi replied, "Don't lose tomorrow and be 4-8 in the SEC."

The Razorbacks have lost all four games without sophomore guard Isaiah Joe since he underwent arthroscopic knee surgery Feb. 4. Five of their SEC losses have been by four or fewer points -- including two in overtime to Auburn 79-76 and at Missouri 83-79. They also have lost by 79-77 scores at LSU and to South Carolina.

Junior guard Mason Jones, who led Arkansas with 38 points against Mississippi State, said that loss was the toughest of all considering the Razorbacks rallied from a 17-point deficit in the second half to take a 75-72 lead, but couldn't hold onto it.

"This game is probably the worst feeling I've had all year knowing we fought so hard and we were just so close," Jones said. "That's probably the bottom line of our season. We've been so close.

"We haven't been able to finish games we should be winning, and now we're in a bad position. We have a hole to get out of, but we've got to keep fighting. You've got to wake up tomorrow and be a better person and get ready for Florida."

"I've not been a part of something so tough," Arkansas Coach Eric Musselman said of the string of close losses. "But now we've got to go play a game at a preseason top-five team that's really talented in Florida."

"I think any program -- any sport -- you just want your team to play as hard as they can," Musselman said. "Look, I don't think that we lacked effort. I thought our guys played as hard as they possibly could.

"You want your culture to be one that plays hard. We're not coming up on the winning side, and it's disappointing, obviously."