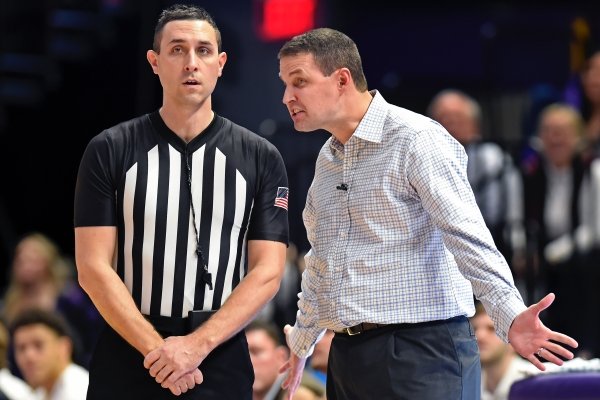 FAYETTEVILLE -- Road losses by Auburn and LSU on Saturday left Kentucky in sole possession of first place in the SEC with six games remaining on the league schedule.

LSU, which has had defensive weaknesses exposed in the past couple of weeks, can get right back to the top tonight when it hosts Kentucky at the Maravich Assembly Center in Baton Rouge at 8 p.m.

LSU Coach Will Wade said a 99-90 loss to Vanderbilt two weeks ago set in motion game plans for the Tigers' opponents since then.

"Vanderbilt really did a good job, and teams have picked up on what they did. That was the biggest disappointment from the Vanderbilt game. Coach [Jerry] Stackhouse did a very good job exposing some of our weakest links. Now we have to go back and change some things and disguise it again."

"We're in a little bit of a rut right here, and we've got to start playing better," Wade said. "We haven't been imposing our will on the glass."

LSU, which opened 8-0 in SEC play, has lost three of its past four games. The Tigers fell 88-82 at Alabama on the same day Kentucky fought back a gritty upset bid from Ole Miss in a 67-62 decision at Rupp Arena.

Meanwhile, Missouri snapped No. 11 Auburn's seven-game winning streak in an 85-73 win in which the visitors shot a season-low 5.9% from three-point range.

LSU fell out of The Associated Press Top 25 on Monday, leaving No. 10 Kentucky and No. 13 Auburn as the SEC's only ranked teams.

Arkansas fell to a No. 11 seed and a play-in game as one of the last four teams in the projected field by CBSSports.com's Jerry Palm on Monday.

The inference is clear. The Razorbacks can still make the NCAA Tournament field if they can recover from a funk that has seen them lose five of their past six games, mostly in excruciating fashion.

USA Today dropped the Razorbacks to its first four teams out line Monday. ESPN.com's Joe Lunardi had the Razorbacks as a 12 seed in a play-in game prior to Saturday's 78-77 loss to Mississippi State.

The naming of "Billy Donovan Court" at Florida's ExacTech Arena on Saturday attracted a who's who of Gator greats as well as SEC Commissioner Greg Sankey for Florida's 84-66 rout of Vanderbilt.

Donovan, the 54-year-old coach of the Oklahoma City Thunder, coached the Gators for 19 seasons and won back-to-back NCAA championships in 2006 and 2007.

His presence at the court-naming ceremony drew the return of Bradley Beal, Joakim Noah, Al Horford and many other Florida greats, along with UF ambassador Steve Spurrier, current football Coach Dan Mullen and many others.

ExacTech Arena opened on Dec. 30, 1980, as the O'Connell Center. Donovan led Florida to a 467-186 record (.715) from 1996 through the 2014-15 season. The Gators won or shared six SEC regular-season championships, won four SEC Tournament titles, played in 14 NCAA Tournaments and four Final Fours during his tenure.

"Obviously, it's real emotional for me and I'm really humbled," Donovan said. "For me, I've always said it takes a lot of people to really contribute and help."

A pivotal moment in Missouri's 85-73 win over Auburn came when a foul call was reversed from Missouri's Javon Pickett to Auburn's Devan Cambridge midway through the second half. The replay review showed Cambridge pulled down Pickett and also stepped on him, leading to a Flagrant 2 foul and an automatic ejection.

The incident led to a six-point possession on three free throws and a made three-pointer by Torrence Watson as Missouri dulled Auburn's second-half momentum.

Alabama's Kira Lewis and Jaden Shackelford swept SEC player of the week honors Monday as determined by the league office.

Lewis, a 6-2 sophomore, was the player of the week after averaging 18.5 points, 8.5 assists, 5.5 rebounds, 2.5 steals and 1 block in games against Auburn and LSU. Lewis became the second Alabama player to post a triple-double with 10 points, 10 rebounds and 13 assists in a loss at Auburn. His assists converted to 38 Alabama points, as 12 of them led to made three-point shots.

South Carolina welcomed back members of its 2017 NCAA Final Four team, led by standouts Sindarius Thornwell and Chris Silva, for Saturday's game against Tennessee, and the honorees were treated to a 63-61 win.

"We got lucky today because we weren't on point," Coach Frank Martin said of giving up an offensive rebound on an intentional missed free throw by the Vols in the last couple of seconds.

South Carolina and Tennessee split their two meetings, with the Volunteers prevailing 56-55 in Knoxville, Tenn. Both games included key block-charge calls in the closing seconds that went in favor of the home team.

Vanderbilt Coach Jerry Stackhouse earned his first ejection in Saturday's 84-66 loss at Florida. Stackhouse drew two technical fouls and got the heave-ho while running on the court to protest a no-call with 22 seconds remaining in the first half. Stackhouse felt Florida's Scottie Lewis should have been called for a flagrant foul on a defensive play against Matthew Moyer.

Florida guard Noah Locke shot 6 of 8 from three-point range Saturday to send his accuracy in conference games soaring above 50%.

Ole Miss had its modest three-game winning streak snapped in Saturday's 67-62 loss at Kentucky, but the Rebels have clearly looked like a different team during the second half of league play.

Ole Miss had beaten South Carolina, Florida and Mississippi State, in order, by a combined 56 points, or 18.7 points per game. The Rebels led Kentucky for much of the game, which featured nine ties and 14 lead changes. The Wildcats took the lead for good with 1:11 remaining on a pair of Nick Richards free throws.

• South Carolina's 75-59 victory at Georgia last week gave the Gamecocks seven consecutive wins in the series and four in a row in Athens.