Not automatic state will get a dancing school 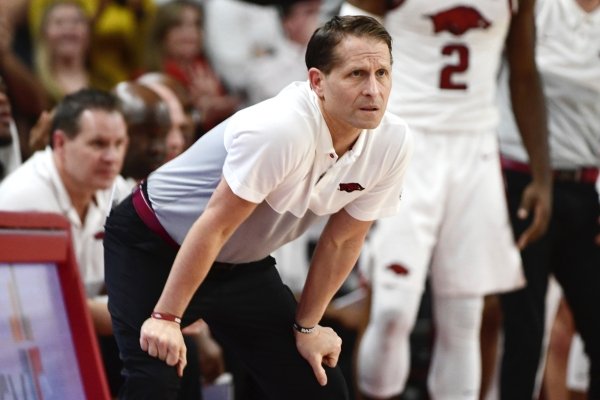 Arkansas coach Eric Musselman reacts after a call against Kentucky during the second half of an NCAA college basketball game, Saturday, Jan. 18, 2020, in Fayetteville, Arkansas. (AP Photo/Michael Woods)

Unless something drastic happens, all five state Division I basketball programs may need to win their conference tournament to make it to March Madness.

For sure, UALR and ASU will have to win the Sun Belt, Central Arkansas the Southland and UAPB the SWAC. Those are one-bid conferences.

The first-place Trojans would help themselves by maintaining a top-two conference finish, which earns a triple bye into the tournament semifinals in the Smoothie King Center, which is the home of the New Orleans Pelicans.

The bottom two teams in the 12-team Sun Belt don’t make the tournament, and then three rounds are played at the home sites of the higher-seeded team. Four teams will make it to New Orleans, with the No. 1 and No. 2 seeds well-rested and already there.

The Trojans dropped two games on the road last week, and their lead in the Sun Belt is one game with four to go.

They are at Arkansas State on Saturday, then host last-place Louisiana-Monroe and Louisiana-Lafayette. The regular-season finale is at Georgia State, which is in second place and riding a three-game winning streak.

It’s a remarkable turnaround for Darrell Walker and the Trojans, who were 10-21 last season and picked to finish 11th this season.

The Red Wolves are 7-9 in the conference. They are playing to stay in the field and possibly host a game or two.

UCA has had a wild season with coach Russ Pennell first taking a leave of absence, then three weeks later announcing he would not return. The Bears were 1-8 when he left.

Anthony Boone, a native of Helena who played at Ole Miss, took over, and the Bears are 8-9 under his direction.

The Razorbacks may need to win four of their final six regular-season games and get a win in the SEC Tournament to land on the right side of the NCAA Tournament bubble.

The Hogs are at Florida tonight, then home for games with Missouri and Tennessee, and back on the road to Georgia. They get LSU at home, then close the season at Texas A&M.

Tonight’s game against the Gators and the one against LSU are huge for the Hogs. Those are the only two teams left on their schedule who have a higher NCAA NET ranking than the Hogs. LSU is No. 29 and Florida 35.

Arkansas slipped to No. 48 after the Mississippi State loss.

It appears the SEC will get only four bids to the NCAA, and Auburn, Kentucky and LSU have three of those sewn up. It is possible the league will get five if Arkansas and Florida finish strong.

The Razorbacks must consider the rest of the regular season payback time. They already have lost to LSU, Tennessee and Missouri.

They haven’t played Florida or Georgia, and getting them on the road doesn’t help. The Gators are 9-3 at home and the Bulldogs are 10-4.

Arkansas did beat Texas A&M at home to start the SEC season.

The Razorbacks also are in jeopardy of finishing in the bottom four of the conference standings and having a play-in game Wednesday, meaning to win it all they would have to become the first school to win five games in five days to capture the SEC’s automatic bid.

Before the league expanded, Arkansas and Georgia won four games in four days.

Isaiah Joe likely will be back before the regular season ends. In his absence, fans have come to realize how important he is not only on offense but also on the defensive end.

Joe is a complete player who could start for most, if not all, of the SEC schools.

This is the February Frenzy, which leads into March Madness. It is getting crazier by the game.