Arkansas vs. Gonzaga: How to watch and listen, forecast, pitching matchup, team comparisons 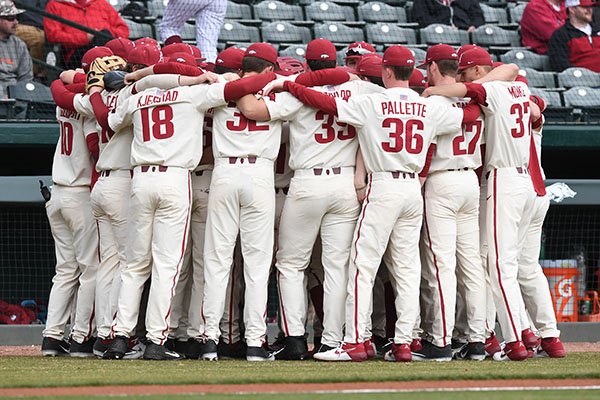 Arkansas baseball players huddle prior to a game against Eastern Illinois on Sunday, Feb. 16, 2020, in Fayetteville.

TELEVISION All games can be accessed on the ESPN app and ESPN3.com. (Carrier login required).

WEATHER According to the National Weather Service, Sunday will be rainy with a high near 50 degrees in Fayetteville. The chance of precipitation is 90 percent.

NOTABLE Gonzaga split a pair of games with No. 25 Oregon State last weekend in Surprise, Ariz. The Bulldogs also defeated New Mexico and lost to BYU…Arkansas enters the series with six consecutive wins over nonconference opponents at Baum-Walker Stadium....Arkansas coach Dave Van Horn indicated this week that he would change the batting order some against Gonzaga. In particular, Van Horn mentioned center fielder Christian Franklin could move down in the order from the two hole where he went 5-for-12 with a home run and a double during the first weekend….Arkansas pitcher Connor Noland struck out a career-high 11 batters in his first start of the season and was named SEC pitcher of the week. Noland is one of six Arkansas pitchers to strike out 11 in a game in the past decade….Gonzaga was predicted to win the West Coast Conference during the preseason. The Bulldogs have won the WCC Tournament twice in the past four seasons….Gonzaga right hander Alek Jacob was named to two preseason All-America teams….Arkansas outfielder Heston Kjerstad was co-SEC player of the week after going 7-for-12 with 4 home runs, a double and 10 RBI on the first weekend.