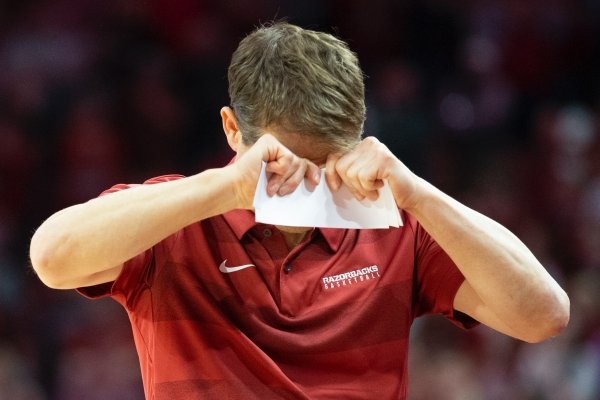 Arkansas coach Eric Musselman reacts to a play in the Razorbacks' game against Mississippi State in Bud Walton Arena in Fayetteville on February 15, 2020.

GAINESVILLE, Fla. -- Maybe a University of Arkansas men's basketball team will win on the road at Florida again.

But it didn't happen Tuesday night, and it hasn't happened in a quarter century.

The Gators beat the Razorbacks 73-59 at Exactech Arena before an announced crowd of 9,023 as Florida ran its home winning streak against Arkansas to 14 consecutive games.

That's a span of 9,123 days since Arkansas last won at Florida.

"That is just crazy," said Gators Coach Mike White, who is 4-0 against Arkansas at Exactech Arena. "You wouldn't think that would be possible. Arkansas is a heck of a program. Hard to beat 'em there, here, anywhere."

Junior guard Mason Jones, who led the Razorbacks with 21 points, played at Florida for the first time Tuesday night, so he's only lost one road game in the series.

"It's a tough streak, but it's going to end eventually," he said. "Who knows when that day comes? I can't really answer that, but I hope it's soon."

The Razorbacks had a shot-clock violation and a missed three-pointer by Desi Sills on two possessions when they could have tied the game or taken the lead.

Arkansas didn't pull closer than four points the rest of the game as the Gators gradually pulled away by hitting 13 of 14 free throws in the final 9:02. They hit 21 of 25 free throws for the game.

"I love Johnson, I really do," Musselman said. "I thought he just dominated the basketball game. We had nobody to guard him. I mean, he takes seven shots and has 24 points.

"He's so quick off the bounce. That's how he ended up with 17 foul shots. He's one of the best dribble-drivers in all of college basketball from the four spot."

Jones is averaging 25.4 points the past nine games, including 40 against Auburn, 38 against Mississippi State and 34 against South Carolina.

"Mason's carrying us," Musselman said. "I haven't been around too many college basketball players that have such a burden that he's had over the last several games.

"The respect I have for him ... I mean, look, there were five Florida Gators concentrating on one guy. And he continues to step up, and he's trying to lead us as best he can. But he needs help out there."

Jones got some help from Arkansas forward Adrio Bailey, who scored 16 points -- his most ever against an SEC opponent -- and had eight rebounds. He hit 7 of 14 shots, including 2 of 5 three-pointers. His previous scoring high against an SEC team was 11 points against Auburn earlier this season.

"Bailey was good for them," Johnson said. "He was crashing the boards and hit some big shots."

Bailey said he was proud of how the Razorbacks fought back when Florida seemed on the verge of blowing them out.

White raved about Jones after the game.

"Mason Jones is one of the most versatile scorers I've seen in this league, and I've been associated with this league a long time," said White, who played at Ole Miss and was an assistant coach with the Rebels. He is in his fifth season at Florida. "His ability to score in transition, off the catch, off the bounce, his ability to draw fouls, his offensive motor.

Florida sophomore guard Andrew Nembhard, who had 17 points and seven rebounds, said he was impressed by Jones.

"He's a tough guy to guard," Nembhard said. "It took a team effort to stop him. Well, not stop him, but limit him as much as possible. He's been really good for them all season, and he was good for them again tonight."

Senior guard Jimmy Whitt added 10 points for the Razorbacks. Ethan Henderson, a sophomore forward making his first start, had 7 points and 3 rebounds in 11 minutes before fouling out.

"It hurts because I felt like we had an opportunity to win," Bailey said of finishing 0-3 at Florida in his career. "We came up short."

Jones said the Razorbacks hurt themselves by falling so far behind in the first half.

"We were fighting hard," Jones said. "We just ran out of energy."

Jones said it was frustrating when the Razorbacks weren't able to get the lead after coming within two points.

"We just couldn't get over the hump," Jones said. "They made enough plays at the end, and you've got to give props to Florida."

Nembhard said he had no idea that Arkansas hadn't won at Florida since 1995.

"We just try to stay in the moment," he said. "But that's a long streak. We were glad to keep it going."

UP NEXT Arkansas plays Missouri at noon Saturday at Walton Arena in Fayetteville.