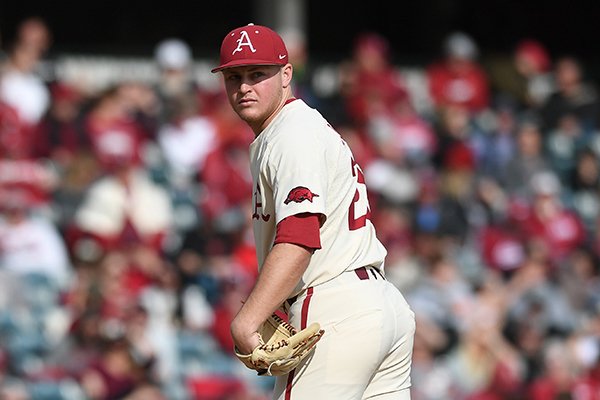 Arkansas pitcher Kole Ramage looks toward first base during a game against Eastern Illinois on Sunday, Feb. 16, 2020, in Fayetteville.

FAYETTEVILLE -- The No. 5 Arkansas Razorbacks have elected to try to keep their co-aces Connor Noland and Patrick Wicklander on regular rest heading into a four-game set with Gonzaga starting Thursday.

That is if the weather cooperates.

Coach Dave Van Horn announced Tuesday that junior Kole Ramage (1-0) would get the start for the University of Arkansas (3-0) in the series opener against the Bulldogs (2-2), which UA officials decided to move up an hour to 2 p.m. based on projected dropping temperatures Thursday evening.

"Ramage was the guy we almost started the opening weekend, but we wanted to keep him out in the pen," Van Horn said. "He threw well enough in preseason to be one of those starters."

[Video not showing up above? Click here to watch » https://www.youtube.com/watch?v=St4pRNE1Tl4]

Ramage (1-0) picked up the victory in Sunday's 12-3 victory over Eastern Illinois, throwing 45 pitches in relief of Blake Adams and allowing no runs on a hit and a walk in two innings.

Starting the right-hander Ramage would give Noland (1-0, 0.00 ERA) and Wicklander (1-0, 0.00) normal rest before facing Gonzaga on Friday and Saturday, respectively, if the weather allows the series to stay on schedule. Colder temperatures and precipitation are in the forecast for the weekend, typical for this time of year at Baum-Walker Stadium.

Noland, named the SEC pitcher of the week, was asked at Tuesday's news conference what he thought of Ramage's outing.

"I thought he did a really good job," he said. "He's got four pitches that are working really well. Obviously he's a guy that's been there and been in some big action, so excited for him to get his first start, and I think he's going to do well."

[Video not showing up above? Click here to watch » https://www.youtube.com/watch?v=KWuhXP3KDAU]

Van Horn and pitching coach Matt Hobbs had seen Ramage as the most viable option for Thursday heading into the Eastern Illinois finale Sunday.

"Going into Sunday's game, coach Hobbs and I had talked about who we were going to pitch on Thursday, and it was gonna be Ramage," Van Horn said. "We wanted to keep Connor, let him get his rest, and Wicklander. But we did want to get [Ramage] in the game and let him get a couple of innings, which was kind of like throwing a bullpen for him, getting ready for Thursday."

Noland said it made sense for he and Wicklander to keep their weekly schedules the same.

"I think it's good," he said. "Obviously we get to stay in the standard routine staying on Friday, Saturday and Sunday for all the guys that pitched last week. Just getting in that rhythm each week and carrying it through is going to be good for us."

[Video not showing up above? Click here to watch » https://www.youtube.com/watch?v=6IYp2BgpyFk]

"I mean, they stepped in and did their roles this past weekend," said designated hitter Matt Goodheart, who hit .308 with a home run and four RBI.

The Razorbacks batted .324 during the three-game sweep of Eastern Illinois, hit 7 home runs and had 15 extra-base hits, averaged 9 runs per game, had a 1.33 ERA and committed 2 errors, one fielding miscue by shortstop Casey Martin and one by Ramage on a throw to first base.

"We did everything pretty well," Van Horn said. "We played pretty good defense, a lot of timely hitting, two-out runs. I try to be positive, but I'd like to cut down our strikeouts a little bit."

"We'll leave the fourth game TBA," Van Horn said. "See how it goes, who we've got to pitch. We're probably going to be battling some weather, too."