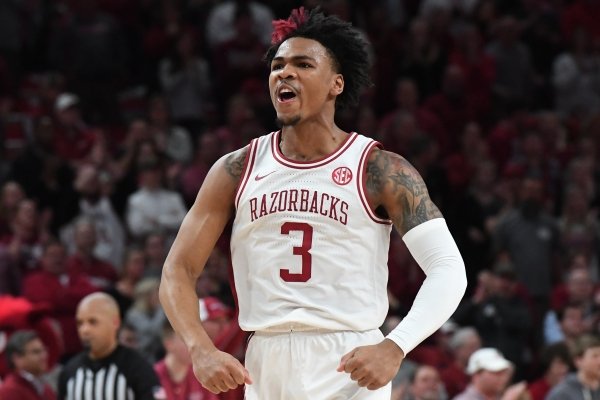 The Razorbacks are a fun, but frustrating, team to watch.

The University of Arkansas fell behind 30-11 against an average Florida team Tuesday night. There was 7:30 to play, and the Gators had just made two free throws after Desi Sills was called for a flagrant foul.

Agony was everywhere in Arkansas. More than likely, people were yelling at their TV.

The Razorbacks had two total field goals at that point, and it was so bad that Coach Eric Musselman was sitting down. He usually logs 3 miles striding up and down the sideline.

At that point, about every Hog on the court had missed, and it was looking like the worst game of the season. Maybe the century.

Then Adrio Bailey — who is playing mostly because of his athletic ability and for some rebounding — pulled up, and before you could yell no, he canned a three-pointer.

After a few more empty possessions, Bailey added a rebound and dunk. Then 18 seconds later, he grabbed a rebound and turned it into a breakaway dunk with an assist from Mason Jones.

Another Bailey dunk made it 33-20 before Jones scored on a fast-break layup.

In case you need to be told, this is the fun part.

Jimmy Whitt grabbed a rebound and put it back in, and another rebound from Bailey led to Jones converting a layup.

The Hogs held the Gators scoreless during the last 3:56 of the first half, and it was 33-26 at the break.

Arkansas played its behind off in the second half, keeping the deficit in single digits until 5:08 remained. That’s when it seemed like the Hogs hit a wall, which they probably did.

Arkansas had five players play at least 30 minutes, and Jones played all but 28 seconds.

Still, this team fights, scraps and shows a spirit that can’t be denied.

Yet, they aren’t good enough to beat Florida on the road no matter what Musselman does.

It doesn’t help when too many people are looking to shoot rather than find a way to win.

The Hogs had only nine assists, and the leading scorer Jones had five of those.

Jones is at the very least a first-team All-SEC player, maybe player of the year, but that doesn’t usually go to a player who is on a team that has to play a Wednesday play-in game in the SEC Tournament.

Bailey did step up Tuesday, scoring 16 points and grabbing eight rebounds, but it was not a good night for Sills or Whitt. Ethan Henderson almost had a good night, but he fouled out in less than 11 minutes.

Isaiah Joe still was on the bench because of knee surgery. He did dress out and went through warmups, so he is closer to returning to action.

Without him, opponents cover Jones front and back, giving him so little time that he occasionally holds the ball a split second too long. It seems when he does that, his teammates step back and clear the way for him. But the extra time gives another defender a chance to get in position to help.

Jones still scored 21 points Tuesday, and it seems like he has a chance to make something positive happen every time he touches the ball.

He is the reason this team has kept opponents honest while Joe rehabs.

More times than not, someone will step up and help, like Bailey did on Tuesday night.

If someone like Whitt or Sills joins the fun, then the Hogs generally win. But Jones plus one is not enough to get a victory, but it is just good enough to make it exciting before the disappointment.