Gonzaga makes most of UA trips 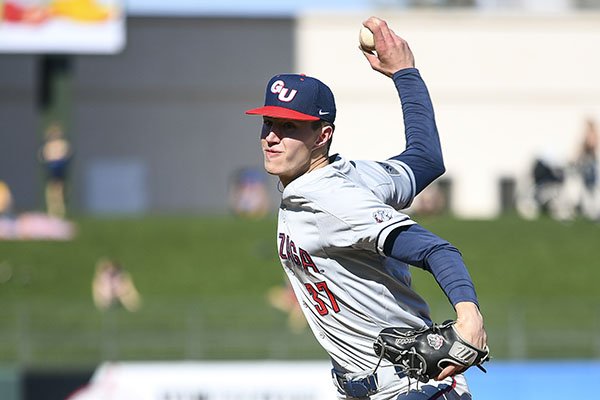 FAYETTEVILLE -- The University of Arkansas has a winning rate of 83% in nonconference games at Baum-Walker Stadium since the start of 2015.

That rate is 0% against this weekend's opponent.

First pitch today was moved up one hour from the original scheduled time due to expected dropping temperatures around sunset. … Arkansas starters on Friday and Saturday are scheduled to be RHP Connor Noland (1-0) and LHP Patrick Wicklander (1-0), who did not allow earned runs in 6 2/3 and 5 innings, respectively, last weekend. … Gonzaga has announced LHP Mac Lardner (0-0, 0.00 ERA in 6 innings), RHP Alek Jacob (0-0, 6.75 in 4 innings) and RHP Nick Trogrlic-Iverson (0-1, 4.50 in 4 innings) as starters for the final three games. … Only Missouri State (5-4), Gonzaga (3-0) and Louisiana Tech (2-2), among Arkansas’ nonconference opponents, have won more than one game at Baum-Walker Stadium since 2015.

The Gonzaga Bulldogs are 3-0 at the Razorbacks' home park in that span, winning more games at Baum-Walker than any other nonconference opponent except for Missouri State, which is 5-4 since 2015.

Gonzaga, the preseason coaches' pick to win the West Coast Conference title, won't be fazed facing the No. 5 Razorbacks for a scheduled four-game set starting today at 2 p.m.

The Bulldogs (2-2) have won their past four games against Arkansas (3-0), with three of them on the road in 2015 and 2016 when Gonzaga abused Arkansas pitchers.

"I know in 2015, they came in here for a couple of midweek games early and we did everything we could to not win games," Arkansas Coach Dave Van Horn said. "We were walking people and hitting people and couldn't hold the lead. They really frustrated us."

Gonzaga won those games 6-2 and 15-5 at what was then Baum Stadium, then came back the next March and laid a 15-10 defeat on the Hogs. The average score of those games was 12-6.

"We've played them midweek, and a lot of things happen with the midweeks that don't happen on the weekend," said Gonzaga Coach Mark Machtolf, who is in his 16th season at the school in Spokane, Wash. "We do try to schedule as hard as we possibly can. We absolutely love Arkansas. What a great venue. The fans are second to none.

Gonzaga leads the series 5-3, and Machtolf is 4-2 head-to-head against Van Horn at their current schools.

"They've got a really good program," Van Horn said. "They've got an older team. You know they're all big series, but I imagine when you come to an SEC school and you've got a chance to play three or four games, it can really boost your resume."

Machtolf said he's only been able to keep up with the Razorbacks by checking statistics, as the Bulldogs opened with four games in Surprise, Ariz., against BYU, Oregon State and New Mexico. He's seen the Razorbacks are fourth nationally with 2.33 home runs per game and 28th in both team batting average (.324) and scoring (9.0 runs per game).

The series is scheduled for early afternoon starts the next four days, but projected inclement weather could force a juggling of the schedule.

Arkansas right-hander Kole Ramage (1-0, 0.00 ERA) is scheduled to start today against left-hander Keaton Knueppel, a 6-1 redshirt junior from Verona, Wis., who would be making his first start since Tommy John surgery in 2018.

"He's been injured so much in his career," Machtolf said of Knueppel. "Mainly fastball, breaking ball, but he does have a good change-up.

"To be honest with you, we haven't seen him enough. He's a little bit of an enigma. A big, strong left-hander who's got good stuff. He just hasn't been out there much."

Knueppel pitched in two games as a freshman and four games as a sophomore, but he did not play last season while recovering from the surgery. He has a career ERA of 7.20.

Arkansas right fielder Heston Kjerstad (.583, 4 HRs, 10 RBI) is the reigning SEC co-player of the week after having a pair of two-home run games in the Hogs' season-opening sweep of Eastern Illinois.

Van Horn hinted he might tinker with the batting order this weekend, possibly moving center fielder Christian Franklin (.417, 1 HR, 3 RBI) down a few spots from second into the middle of the order.

"I just like Christian Franklin's approach right now, and he may be a guy we move a little bit," Van Horn said. "He'll take a walk, but he's also hit the ball a long way. He uses the whole field.

"I told Christian before the season started that I might hit him one, two, five, somewhere in there. We may move him back in the order just to sit behind some other hitters. Take a little speed to the middle, to the backside of that lineup."

Goodheart said he hopes pitchers remain honest to Kjerstad with him hitting behind the junior, who drew two of Arkansas' 18 walks against Eastern Illinois.

"They put me behind Kjerstad so maybe he wouldn't get walked quite as much," Goodheart said. "But with the performance he put on this weekend, it's probably not going to matter. I mean, just from a joking standpoint, I'm just tired of hearing the home run music instead of my walk-up song."

Sophomore right-hander Connor Noland (1-0, 0.00), who will keep his Friday starting slot ahead of left-hander Patrick Wicklander (1-0, 0.00) on Saturday, endorsed the work of the entire staff on the opening weekend.

"I thought everybody did a good job," Noland said. "The guys that came out of the pen threw strikes, filled up the zone and attacked hitters. I thought it was good to see some of the young guys get in there and really compete."

"He's got a different delivery," Machtolf said. "He's funky. The velocity, he's not going to blow you away on that. But you don't see guys like him very often with his arm slot and tempo.

"He does a great job. If he gets in trouble, he does a really good job in pressure situations of throwing strikes, throwing different pitches for strikes."

Gonzaga's top hitter is Jack Machtolf (.364), the coach's son and starting left fielder. Designated hitter Tyler Rando (.333), outfielder/first baseman Ryan Sullivan (.313, 1 HR, 5 RBI) and first baseman/pitcher Gabriel Hughes (.313) are all above .300, but there's a big gap down to shortstop and leadoff man Ernie Yake (.235), who is fifth in batting average.

"Some of the bullpen guys that came in, it's like they'd give us one good inning and then the second inning didn't go so good," he said. "You need to see guys come out and be able to duplicate what they just did."