Hogs score twice in 7th to take Game 1 from Zags 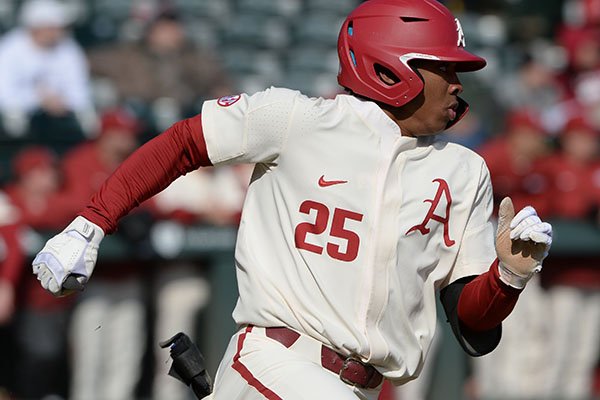 FAYETTEVILLE — Christian Franklin beat out a throw at first base to give No. 5 Arkansas a lead in the seventh inning, and the Razorbacks held off a strong effort by Gonzaga to win 7-5 Thursday at Baum-Walker Stadium.

Arkansas improved to 4-0 with the victory in the opening game of a four-game series against the Bulldogs, who are the preseason favorite to win the West Coast Conference. The teams are scheduled to play again Friday at 3 p.m.

With the bases loaded and one out, Franklin nearly hit into an inning-ending double play in the seventh. Gonzaga second baseman Mason Marenco flipped to shortstop Ernie Yake to force out Arkansas’ Casey Martin at second base, but Yake’s throw to first baseman Gabriel Hughes was late by a step. The call on the field was that Franklin was safe, and it was upheld on replay.

Arkansas added an insurance run moments later and went ahead 7-5 when Bulldogs pitcher Trystan Vrieling threw a wild pitch that allowed Matt Goodheart to score from third base.

Elijah Trest retired all three batters he faced in the eighth inning and, making his first appearance of the season, Zebulon Vermillion worked around a pair of Gonzaga singles in the ninth to record the team’s first save. Vermillion stranded runners at the corners when Jack Machtolf grounded out to end the game.

Ryan Sullivan singled with one out and advanced to third base on Stephen Lund’s two-out single against Vermillion in the ninth. It was Lund's game-high third hit.

Sullivan and Hughes had back-to-back doubles against Arkansas reliever Kevin Kopps with one out in the fifth. Hughes’ double scored Sullivan, and Hughes scored when Machtolf grounded out to first base.

Kopps and Arkansas starter Kole Ramage both struggled in short outings against the Bulldogs. Ramage allowed 2 runs on 4 hits and 2 walks in 2 ⅔ innings, and Kopps allowed 3 runs on 4 hits in 2 ⅓ innings.

Sophomore left hander Caden Monke settled things down for the Razorbacks with a scoreless sixth and seventh. Monke allowed a hit and issued a walk, and struck out three Zags in his first career win.

Arkansas led 2-0 when freshman Robert Moore doubled with the bases loaded with two outs in the second inning, but Gonzaga tied the game in the top of the third on Brett Harris’ opposite-field home run to right.

The Razorbacks regained the lead in the bottom of the third on Jacob Nesbit’s RBI groundout to score Heston Kjerstad with the bases loaded. It appeared Arkansas’ lead would be 3-2 going to the fourth, but Casey Opitz’s two-out fly ball to center field was misplayed in a strong wind by Josh Bristyan. It dropped for a double and scored two more to put the Razorbacks ahead 5-2.

Redshirt junior left hander Keaton Knueppel pitched 2 ⅓ innings in the start for the Zags. Knueppel was pitching in a game for the first time since undergoing Tommy John surgery in 2018.

Jacob Rutherford, a freshman right hander, took the loss. Rutherford walked Kjerstad and gave up a single to Goodheart to set up the scoring opportunity in the seventh.