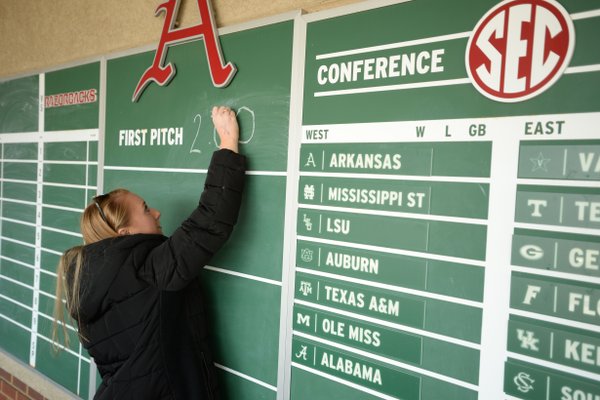 Arkansas takes on Gonzaga at 2:00 p.m. today for game one of a four game series.

Zebulon Vermillion comes into the game for the save.

Vermillion gets the first batter to ground out to first.

Sullivan grounds a ball to Martin at shortstop. Martin dives for it and gets to it, but can't field it cleanly to throw the runner out.

Hughes gets into one, but comes up just short of the left field fence as Webb catches it for out number two.

Machtolf grounds out to Martin who flips it to Moore at second for out number three.

Casey Opitz leads off the eighth with a flyout to left.

Nesbit singles through the right side.

Moore dribbles a ball back to the pitcher for out number two. Austin advances to second.

Vrieling walks Webb on four pitches to get to Heston Kjerstad. Probably not planned.

Kjerstad grounds into the shift to end the inning.

Elijah Trest comes in to pitch the eighth for the Hogs.

Trest retires the Zags in order to send the game to the bottom of the eighth.

Braydon Webb lines out to third.

Kjerstad gets behind in the count 1-2, but takes three straight balls to draw the walk.

Goodheart follows with a single and moves Kjerstad to third. Runners on the corners for Martin with one out.

Martin works the count full, then takes a ball in the dirt to load the bases for Christian Franklin.

Behind in the count 0-2 Franklin grounds a ball to second. Gonzaga tries to turn two, but Franklin barely beats the throw. Gonzaga head coach Mark Machtolf challenges the call, but Franklin is called safe and the Razorbacks have the lead.

The Hogs extend their lead on a wild pitch. Goodheart comes in to score, Franklin advances to second.

Nesbit strikes out swinging on a nine pitch at bat.

Monke hits the next batter Land to put a runner on first with one out.

Machtolf flies out to Franklin in center.

Marenco grounds out to second to end the half inning.

It's stretch time at Baum-Walker at we're tied at five apiece.

Opitz strikes out looking on a pitch that Dave Van Horn didn't agree with. 1 Out

Robert Moore lines out to second to end the inning.

Naughton has struck out five in 3.2 IP

Caden Monke comes in to pitch for the Razorbacks to start the sixth inning.

That brings up the top of the order. Yake flies out to center.

Harris hits a ball off the glove of Nesbit. Nesbit had to leap to even get a glove on it.

Rando strikes out, but the runners were stealing on the play so they advance to third and second. 2 Out.

Monke strikes out Sullivan looking to end the threat in the sixth.

Gonzaga has left eight batters on base through six innings.

Goodheart grounds out to second.

Franklin reaches on an infield single, but is stranded there as Nesbit grounds out to third.

Ryan Sullivan gets a one out double for Gonzaga.

Hughes scores him with a double of his own.

Land follows the double with an infield single. Hughes moves up to third and there are runners on the corners with one out for the Bulldogs.

Machtolf hits a slow roller down the first base line. Austin picks it up and tags Machtolf, but Hughes comes in to score.

Marenco flies out to center to end the threat, but the Zags tie it up at 5-5 as half the game is in the books.

Hogs go in order in the fourth. Moore flies out to center, Webb lines out to short and Kjerstad strikes out swinging.

Morenco leads off the fourth inning with a triple off the left centerfield wall.

The next batter Bristyan grounds out to Martin to score Morenco and pick up the RBI.

Kopps settles in and gets the next two batters to pop out and ground out to end the inning.

Kjerstad leads off with a single to right-center field.

Matt Goodheart hits a hot shot to the first baseman who has some trouble fielding it, but gathers it in to step on the bag. Kjerstad advances to second. 1 out.

Keaton Knueppel's day is done. Daniel Naughton is now on the bump for the Bulldogs.

Martin walks and the Hogs have runners on first and second with one out.

Franklin works a walk as well. Bases loaded for the Hogs with Jacob Nesbit at the plate.

Nesbit ground out to second, but gets the RBI as Kjerstad comes in to score to give the Hogs the lead.

The wind makes another play today. Opitz hits a ball high in the air in center field and Bristyan can't catch it. Opitz gets credit for a double and two RBI. Hogs extend their lead.

Cole Austin strikes out to end the inning.

Ramage walks Yake to lead off the third inning.

We see the wind come into play, as Brett Harris hits a two-run home run out to right field to even the score at 2-2. Harris didn't hit that one particularly hard, but he got it up into the jet stream and it took off.

Tyler Rando hits a slow roller down the third base line. Jacob Nesbit lets the ball roll down the line, but it stays fair and Rando is aboard with nobody out.

Kevin Kopps is warming in the bullpen for the Razorbacks.

Ryan Sullivan puts a charge into the ball, but he hits it to the deepest part of the ballpark and Franklin chases it down on the center field warning track. Rando stays at first. 1 Out.

Ramage gets Hughes to chase a breaking ball out of the zone. 2 Out.

Land singles between Nesbit and Martin on the left side of the infield and that will be all for Kole Ramage. Kevin Kopps coming in with runners on first and second and two outs.

Kopps gets Machtolf to fly out to left to end the inning.

Casey Martin pops up to second. 1 out.

Christian Franklin lines what could have been a double into left-center field, but centerfielder Josh Bristyan dives and takes away extra bases from Franklin. 2 Out.

Jacob Nesbit lines a ball into left field for the Hogs first hit of the game.

Opitz follows with a single in almost the same spot to give the Hogs two aboard for Cole Austin.

Austin works a walk after a full count. Robert Moore will bat with bases loaded and two outs.

Moore jumps on the first pitch, puts it down the line and gives Arkansas a 2-0 lead.

Braydon Webb grounds out to short to end the inning, but the Hogs are on the board first with some nice hitting from Robert Moore.

Braydon Webb with a webgem in foul territory to get the first out of the inning. He dove close to where the dirt meets the grass down the left field line and retired the first batter of the inning. 1 out.

Nine hole hitter Josh Bristyan pops out to Opitz in foul territory to end the Bulldogs threat in the second.

Braydon Webb does not continue his streak of getting on base to start the game, as he lines out to third. One out.

Heston Kjerstad lines out to center for out number two.

Matt Goodheart strikes out swinging to end the first inning.

Gonzaga pitcher Keaton Knueppel threw 17 pitches, 13 of them for strikes in the first inning.

Kole Ramage takes the mound for the Razorbacks. The wind is blowing at a decent clip from the north, which means it's blowing out to right.

Ramage retires the first batter on a flyout, but hits the next batter Brett Harris. Three hole Tyler Rando lines a ball up the middle for a single. Runners on first and second now for Gonzaga. Ryan Sullivan is out in front of a Ramage pitch and cues it toward the pitcher. Opitz picked it up and retires Sullivan at first. Runners advance to second and third. Ramage gets out of trouble by striking out Gabriel Hughes on a ball in the dirt.

Kjerstad moves up to the 2 hole; Christian Franklin is batting fifth.