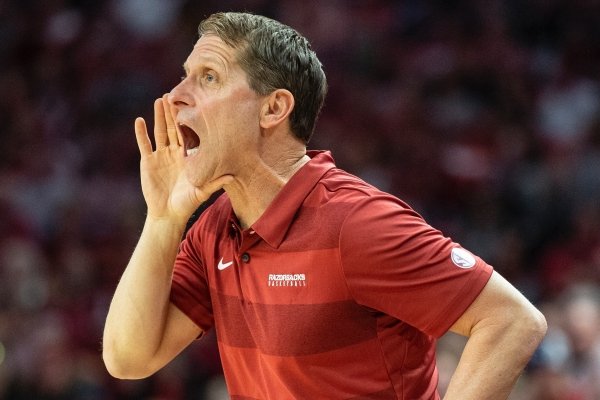 The Wolf Pack were nationally ranked from start to finish, won the Mountain West Conference regular-season title, made a third consecutive NCAA Tournament appearance and finished 29-5.

Florida ended Nevada's season with a 70-61 victory in the first round of the NCAA Tournament in Des Moines, Iowa.

The Gators also beat Musselman's new team -- the University of Arkansas -- 73-59 on Tuesday at Exactech Arena.

In Musselman's four seasons at Nevada, the Wolf Pack never lost more than two games in a row, and their record was 110-34. Musselman landed the Arkansas job by reviving the Nevada program.

The Wolf Pack made four consecutive NCAA Tournament appearances from 2004-2007 under Trent Johnson and Mark Fox -- who later coached in the SEC at LSU and Georgia, respectively -- but Nevada didn't make it back to the Big Dance until Musselman's arrival.

After the Wolf Pack were 9-22 the season before Musselman was hired, Nevada went 24-14 in his first season.

Arkansas (16-10, 4-9 SEC) had the look of an NCAA Tournament team when it started 14-2 this season, but the Razorbacks are 2-8 in their past 10 games. Their losing streak coincides with the five games sophomore guard Isaiah Joe has missed since undergoing arthroscopic surgery on his right knee.

"It is what it is," Musselman said when asked about the losing streak. "We've just got to go back to the drawing board. It's nothing like I've ever experienced, but it's just about trying to help our student-athletes grow as players, work on individual skills, try to get ready for our next game.

"The locker room's hurting. They'd like to win. But, I mean, all of us coaches, these are great jobs and this is part of the process in Year One."

The Razorbacks play Missouri (13-13, 5-8) at noon Saturday in Walton Arena. The Tigers have won three of their last four games, including 83-79 in overtime over Arkansas on Feb. 8. They beat Ole Miss 71-68 on Tuesday in Mizzou Arena, led by sophomore guard Xavier Pinson's 32 points.

Joe -- a 6-5 sophomore averaging 16.0 points per game who can play good perimeter defense without piling up fouls -- resumed practice Monday, traveled with the team to Florida, dressed out and went through pregame warmups.

Musselman said after the game Joe is feeling good, but he didn't want to predict whether he'll play against Missouri.

"The few games we have left, hopefully Isaiah will help whenever he's healthy," Musselman said.

Arkansas forward Adrio Bailey, who had 16 points and eight rebounds against Florida, said the Razorbacks will be glad when Joe can return to the lineup, but that he needs to focus on his recovery.

"The team is important, but Isaiah's health is way more important than him trying to rush back," Bailey said. "But when he gets back healthy, we'll be all connected.

"I'm glad he got a chance to be on the road with us. I just want him to get healthy and get back whenever he feels he's ready."

Musselman said he's always left the decision of when to play again up to the player coming back from an injury.

"So we'll just continue to have [Joe] practice and see when he's ready to roll," Musselman said. "I just want to keep getting him reps as much as we can and see how he feels."

Musselman has gone with three different starting lineups in the four games Joe has missed.

Mason Jones, Jimmy Whitt, Desi Sills, Reggie Chaney and Bailey started in losses to Auburn and Missouri. Jalen Harris started for Jones at Tennessee. Jones was back in the lineup the last two games. Ethan Henderson made his first career start in Chaney's place at Florida.

"We went through all of nonconference, and we played four guards and I thought we were really hard to match up with," Musselman said of a lineup of Joe, Jones, Whitt, Sills and Bailey. "But we knew we had a deficiency rebounding the basketball.

"Then when Isaiah got hurt, we really didn't have any options, so we played two bigs."

Musselman said having the 6-8 Chaney start with the 6-6 Bailey -- "bigs" by Arkansas' standards this season -- hasn't been the answer in Joe's absence.

"The two bigs have not worked at all," he said. "We haven't rebounded any better with the two bigs. Our defense isn't nearly what it was because of a lack of lateral foot speed, and now we've lost all of our creativity on the offense where we created mismatches playing with four guards and then when we had five guards."

Musselman said he believed the 6-8 Henderson's energy would help at Florida, and he did score a career-high seven points and gathered three rebounds in only 11 minutes.

Why didn't Henderson play more with that production in limited time? Because he fouled out.

Musselman still praised Henderson -- adding the caveat that he can't foul out while playing 11 minutes -- and said he showed growth. Florida led 52-48 when Henderson fouled out with 9:02 to play, then the Gators closed on a 21-11 run.

Jones had 21 points to lead the Razorbacks in scoring for the 16th time this season.

Whitt scored 10 points, but had four in the final 3:03 after Florida built a 66-54 lead. Sills was scoreless for the first time this season after having 15 points -- his high for an SEC game this season -- against Mississippi State on Saturday. Harris had three points in 32 minutes, Jeantal Cylla scored two points in 11 minutes and Chaney didn't score in five minutes.

"I thought we had three players play really well," Musselman said of Jones, Bailey and Henderson. "And then, not so much anywhere else."