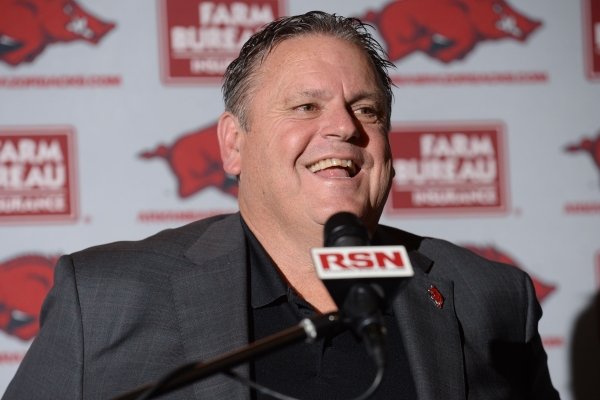 Arkansas coach Sam Pittman speaks Wednesday, Feb. 5, 2020, about the Razorbacks' signees with members of the media inside the Fred W. Smith Football Center on the university campus in Fayetteville.

First-year Arkansas coach Sam Pittman is scheduled to speak on Day 3 of SEC Media Days in July, according to a release from the league office.

Along with Alabama’s Nick Saban, Mississippi State’s Mike Leach and Jeremy Pruitt of Tennessee, Pittman, hired to lead the Razorbacks on Dec. 8, will make the rounds at the College Football Hall of Fame and Omni Hotel at CNN Center in Atlanta on July 15.

The four-day event will be broadcast on SEC Network and ESPN. Full television information, a daily detailed schedule and attending athletes will be made known in early July.

Last July, Arkansas was predicted to finish last in the SEC Western Division by media members who cover the league. The Razorbacks finished with 343 points on the 260 ballots submitted, 161 points behind sixth-place Ole Miss.