In between works for Ramirez, UA 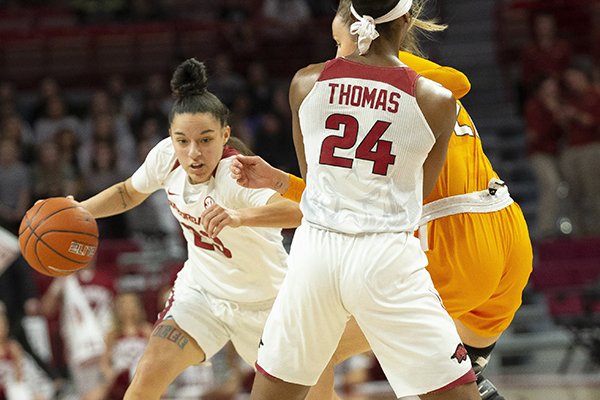 Arkansas guard Amber Ramirez drives around a Tennessee defender while teammate Taylah Thomas (24) sets a screen during a game Thursday, Feb. 20, 2020, in Fayetteville.

FAYETTEVILLE -- Amber Ramirez has earned a reputation as a long-range gunner for the University of Arkansas, but she showed off a solid midrange game Thursday night.

Ramirez scored a game-high 29 points and connected on five three-pointers to help the No. 22 Razorbacks to an 83-75 win against slumping Tennessee, which lost its fifth consecutive game. The victory was Arkansas' ninth in SEC play, only the second time in program history it has reached that win total.

Ramirez came out firing early, scoring 12 points in the first quarter to help Arkansas (21-5, 9-4 SEC) grab the early lead, then with the game hanging in limbo late, she hit back-to-back pull-up shots to hold off a late Tennessee charge.

"She works on that every day in practice," said Alexis Tolefree, who scored 22 points for the Razorbacks.

Ramirez said when Tennessee extended its defense to guard against the perimeter shot late, it left the space open for her midrange game.

"I knew they were going to focus on my three-pointers and make sure I didn't get easy looks," Ramirez said. "For a couple of games, I struggled with that a little bit on getting the next shot, so I think the midrange is really opening up more of my game."

"She has got a killer midrange," Neighbors said. "I stop her from doing it a lot because I just think the midrange game at times can really hurt you over the course of the game, but when it's what they give you, you have to take it."

The Lady Vols got 15 fourth-quarter points from Rae Burrell, who finished with 21, and closed to within 79-75 with 13 seconds left on a three-pointer from Rennia Daniels, who scored 18 points.

Forced to foul to stop the clock, Tennessee sent Tolefree to the line twice in the closing seconds. The senior guard was a perfect 4 of 4 to seal the victory.

Former Lady Vol Kellie Harper is in her first season as Tennessee's coach after leading Missouri State to a Sweet 16 appearance last season. Harper said her team, which had 23 turnovers, is feeling the effects of a tough schedule combined with inexperience.

"I knew when I received our schedule that this was going to be a really tough stretch for us," she said. "So this is not a shock. Not saying that we were expecting to lose games, but we knew this was going to be really hard. Every game out you should be motivated to play and be competitive every single game. You play to compete and win every single game. I thought we had some fight in the second half, and we'll try to build on that."

Neighbors said his team is playing at a high level moving into the final three games of the regular season. Arkansas has won six of its past seven games with a road game at Florida next on the schedule Sunday. The Razorbacks are still in the hunt for a top-two finish in the SEC.

"But we can't get there without the next one. This one gets us to nine, and you can't get to 10 before you get to nine."

South Alabama jumped out to a 25-16 advantage after the first quarter before increasing its edge to 16 points at intermission. The Jaguars led 70-53 at the end of the third quarter.

ASU forced 21 turnovers and converted those into 26 points.

ASU had four players in double figures with Morgan Wallace and Payton Tennison leading the way with 15 apiece. Jireh Washington had 12, while Peyton Martin chipped in 11 for the Red Wolves.