Arkansas is part of bubble talk 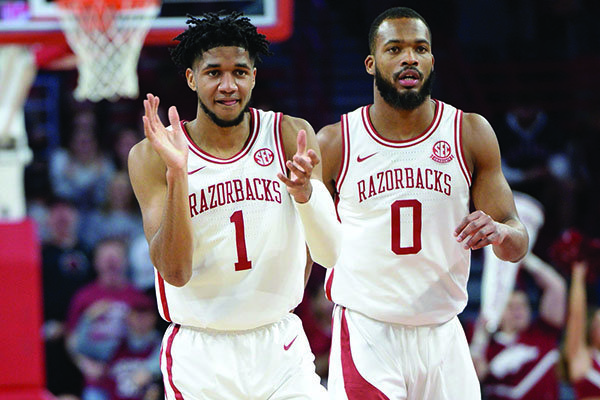 Arkansas guards Isaiah Joe (1) and Jeantal Cylla celebrate a 3-point basket Saturday, Feb. 22, 2020, during the first half of play against Missouri in Bud Walton Arena in Fayetteville.

FAYETTEVILLE -- The University of Arkansas gave a jolt to its fading NCAA Tournament hopes with Saturday's 78-68 victory over Missouri at Walton Arena.

ESPN.com's Joe Lunardi made an appearance during Saturday's late game between Alabama and Ole Miss. He commented specifically on Arkansas' improved chances to make the NCAA Tournament as an at-large team after Saturday's victory.

"Arkansas certainly stays in the conversation, but at 5-9 in the league, they've still got to get some momentum here now that Isaiah Joe is back," Lunardi said. "I think Arkansas whole is a very good team."

Lunardi gave Arkansas a 55% chance of making the field during Saturday's Arkansas-Missouri broadcast, but he did not include the Razorbacks in his latest projection. He had Kentucky and Auburn as 4 seeds, LSU as an 8 seed and Florida as a 9 seed in his Monday projection. He listed Mississippi State among his first four teams out of the field, and Alabama and South Carolina among his next four out.

Jerry Palm of CBS Sports.com includes the Razorbacks as an 11 seed among the five SEC teams in his last projection. The others are 4 seeds Auburn and Kentucky, 8 seed LSU and 10 seed Florida.

USA Today Sports listed 3 seed Kentucky, 4 seed Auburn, 7 seed LSU and 11 seed Florida from the SEC in its Monday projection, with Alabama, Arkansas, Mississippi State, South Carolina and Tennessee from the league also getting consideration for a berth.

There are preliminaries Tuesday, then the biggest remaining game left on the schedule to determine the SEC regular-season champion will take place Saturday.

Kentucky, in pursuit of its 50th SEC regular-season title, will host Auburn on Saturday at Rupp Arena. The Wildcats have a two-game lead in the SEC with a 12-2 mark as they try to claim their first crown since Malik Monk and company won it in the 2016-17 season.

On Tuesday at 6 p.m., Auburn hosts Ole Miss (SEC Network) and Kentucky travels to Texas A&M (ESPN), which has been one of the league's top surprises in Coach Buzz Williams' first season.

Tennessee Coach Rick Barnes did not call a timeout during a scoreless stretch of 6:27 by his Volunteers in which Auburn turned a 54-37 deficit into a 55-54 lead with an 18-0 run.

The Vols seized the 54-37 lead on Jordan Bowden's jumper in the paint at the 14:31 mark. Tennessee had six turnovers, missed three shots and committed two fouls during the Tigers' ferocious rally. The only timeout during that stretch occurred on the under-12 media timeout at the 10:42 mark.

Barnes was asked whether the makeup of his team determines when he calls a timeout.

"Yes, absolutely," he said. "You can call timeouts, but when you come out of the timeout and you don't execute, then why does it matter?"

Conversely, Auburn Coach Bruce Pearl did not call a timeout as the Volunteers opened the second half on a 15-2 run.

After Saturday's 87-75 victory over Mississippi State, Coach Buzz Williams was asked how his team has built to this point in the season.

"I just think when you're in a tornado, you're not able to forecast," Williams said. "We have a laundry list of things that we need to accomplish each day, so you spend your energy, your emotion and your time trying to accomplish the things on the list for that day.

"I think there has been some consistency over the last eight or nine weeks in how we approach our work. I think there's been a crescendo in the comprehension level in the things we're asking them to do on both ends of the floor. I think we've tried to remove as much as possible -- whether that's the playbook or whether that's overwhelming them with information on the opponent -- so that we can be held accountable to the things that matter the most."

Williams said he's thankful to have the Kentucky game at home.

"The next game and who it is and where it is, after all that we've been through, that's why I'm so pitiful up here after a game. My brain is just playing pingpong.

"I think our guys are exhausted because they're absolutely giving everything they have, not just physically but mentally and emotionally. To be thinking, 'Oh, here comes Big Blue Nation and Coach Cal [John Calipari] and he's the best,' none of those words are going on amongst our team, our staff or our players. We're just grateful to have the chance to see what our work has been able to do. There's a level of excitement."

Said Mississippi State Coach Ben Howland: "I give great respect to Buzz for what a great job he does and how this team has developed from the beginning of the year to where they are now. They're a problem for everybody."

Georgia's buzzer-beating 80-78 victory at Vanderbilt on Saturday left the Commodores and Missouri as the only SEC teams without a conference road win.

Kentucky, the SEC leader with a 12-2 record, not surprisingly leads the way with a 5-2 mark in road games this year. LSU and Texas A&M are the only other schools with winning SEC road records at 4-3 each. Alabama, Auburn, Florida, South Carolina and Tennessee have managed 3-4 marks, while Arkansas and Mississippi State are 2-5 in SEC road games. Georgia and Ole Miss have both won one road game, with the Rebels getting theirs at Georgia's expense, 70-60 on Jan. 25.

Auburn and Kentucky are the lone SEC teams to have 7-0 records in conference home games, while Florida, LSU and Mississippi State are right behind at 6-1. Their losses have come against Mississippi State, Kentucky and Auburn, respectively.

Missouri and South Carolina have compiled 5-2 home marks in league play, and Alabama, Tennessee and Texas A&M are 4-3.

Four teams have losing home SEC records. Arkansas, Georgia and Ole Miss have 3-4 marks, while Vanderbilt is 1-6. The Commodores lone conference win came against then-SEC leader LSU by a 99-90 count on Feb. 5, breaking the Tigers' 8-0 start to league play.

Kentucky assistant coach Kenny Payne, standing in for Coach John Calipari on Monday, called Texas A&M a good team that is capable of beating the Wildcats in tonight's game at Reed Arena in College Station, Texas.

"Very tough game," Payne said. "They try to get you in foul trouble, which has been something we struggle with. They throw a lot of junk defenses at you, throw different rotations and zones and presses

Payne said the Wildcats have stressed throughout the season that the better passing team generally wins games.

"They're not going to let you run plays," he said. "You've got to be able to spread the floor, drive the ball, move the ball and make good passes to each other and take good shots."

Quickley, a 6-3 sophomore from Havre de Grace, Md., averaged 23.5 points, 3 rebounds, 3 steals and 2.5 assists in Kentucky wins over LSU and Florida and was named SEC player of the week. He had a career-high 26 points, including 22 in the second half, in the Wildcats' win over Florida.

Edwards, a 6-5, 225-pounder from Atlanta, earned SEC freshman of the week honors after averaging 18.5 points, 5.5 rebounds, 2.5 assists and 1.5 blocked shots in wins over Auburn and Vanderbilt. Edwards has scored in double figures in 23 of 27 games.

Ole Miss Coach Kermit Davis got ejected from Saturday's 103-78 loss against Alabama early in the second half. Davis' ejection came at the 14:31 mark, right after his top player, Breein Tyree, had been assessed a technical foul on the Rebels' offensive end.

Davis had earlier picked up a technical foul complaining about a moving screen called against the Rebels' Khadim Sy, moments after Ole Miss had taken possession after an offensive foul call against Alabama's Galin Smith. That technical occurred at the 4:05 mark of the first half, and Alabama's Kira Lewis missed both free throws after Davis was teed up.

The second set of technical fouls was a different story. The Tide's James Bolden hit all four free throws after those technicals, then Lewis made a jumper in the paint, allowing Alabama to stretch its lead to 62-45.

The NCAA instituted last year a new rating system called the NET rankings, which took the place of the Ratings Percentage Index. An acronym for NCAA Evaluation Tool, the NET rankings take into account game results, strength of schedule, game location, scoring margin, net offensive and defensive efficiency and the quality of wins and losses.

The Wildcats are closing in on their 50th SEC regular-season championship, entering the week two games ahead of Auburn and LSU. The Tigers, who handled Kentucky 75-66 on Feb. 1, can't afford to fall three games back. Kentucky is 6-0 since that loss at Auburn.

"The whole time it's, how do I get my guys free mentally? Fresh legs and fresh minds in March. That's what wins. Fresh minds means I'm not overwhelming them with two-hour film sessions or with big, long scouting reports and overdoing this." -- Kentucky Coach John Calipari on Saturday

"You turn a team over 24 times, you have 18 steals, it tells you the kind of fight and the kind of character you have." -- Auburn Coach Bruce Pearl after beating Tennessee 73-66 on Saturday

"I thought we did a good job taking good shots, the type of shots we want to make. Obviously it looks prettier when they go in." -- Texas A&M Coach Buzz Williams after the Aggies shot a season-high 59.6% in an 87-75 win over Mississippi State on Saturday

Distance in feet of the full-court putt made through a small hole by an older Ole Miss fan as she won a car during Saturday's game vs. Alabama at The Pavilion at Ole Miss