The KC kid: Moore's fast start no surprise to those who have coached him 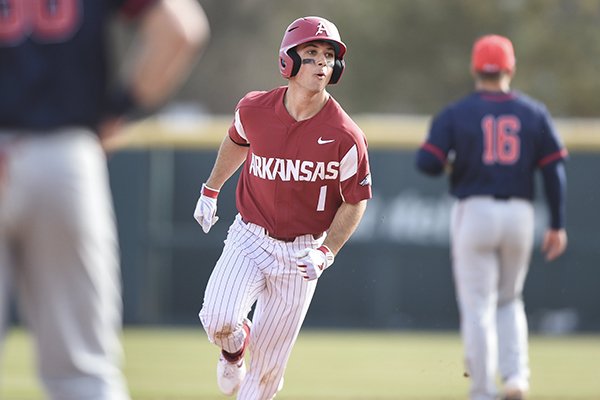 Arkansas second baseman Robert Moore runs the bases after hitting a home run during a game against Gonzaga on Saturday, Feb. 22, 2020, in Fayetteville.

FAYETTEVILLE — At the plate, in the field and on the bases, Arkansas freshman second baseman Robert Moore showed the all-around play over the weekend that made him one of the most coveted baseball recruits in the high school class of 2020.

Moore went 8-for-12, walked 4 times, scored 4 runs and had 9 RBI in the Razorbacks’ 4-game sweep of Gonzaga at Baum-Walker Stadium. Moore reached base in each of his final eight plate appearances of the weekend.

His glove flip to first base to force out a base runner Saturday was featured as one of SportsCenter’s top 10 plays, and was one of a handful of great defensive plays throughout the weekend. Moore teamed with shortstop Casey Martin to turn two double plays against the Bulldogs - the third and fourth times they have combined on double plays through seven games - and he robbed Ryan Sullivan of a hit early in Sunday’s game by charging a ball on the opposite side of second base.

Through 25 opportunities, Moore is fielding 1.000.

Moore also had a highlight running the bases Sunday when he went from first to third on a walk by Arkansas’ Heston Kjerstad. Gonzaga shifted its defense to overload the right side of the infield against the left-handed hitting Kjerstad, and Moore, who battled back from a 1-2 count to walk earlier in the inning, sprinted to third base when the Bulldogs’ third baseman was slow to cover the bag.

“That’s about as typical Robert Moore as it gets right there,” said Will Gorden, who coached Moore for two seasons at Shawnee Mission East High School near Kansas City. “If you’re not paying attention to him, he’s paying attention to you and he’ll take that extra base.

“One of the things he used to do with us was take that throw from the outfield on a single, and I would have to tell our first baseman to be ready all the time because he would try to back pick the runner at first. You wait, that will come (at Arkansas).”

Moore’s instincts are high, in part, because of his exposure to high-level baseball. His father, Dayton Moore, is the general manager of the Kansas City Royals and has worked in professional baseball for more than 25 years. Arkansas assistant coach Nate Thompson, who recruited Moore, said it wasn’t uncommon to see him take infield with big leaguers as a kid.

“One of the things I learned from him is that you’ve got to let Robert Moore be Robert Moore,” Gorden said. “I think a lot of times as coaches we try to have players do it a certain way or a certain style, and that gets in the way of his IQ. When he’s able to do what he does, it’s because of that freedom he has. That’s when you see a next-level play - and I’m not just talking SEC, but a professional-level play.”

Moore, 17, has been considered one of the nation’s best players in his age group for several years. He played on the 15-under national team, is a member of USA Baseball’s development team and played in the High School All-Star Game as part of MLB’s All-Star weekend in Cleveland last year.

He is the youngest Arkansas player ever to be named SEC player of the week.

“Age is only a number and his baseball IQ makes up for any age difference,” Gorden said. “He’s literally played all over the world and in some of the biggest competitions with Team USA and all that. I think that has done a great job in preparing him.”

Moore’s big series against Gonzaga came after he struggled at the plate in his first series. Against Eastern Illinois, he went 1-for-12 with four strikeouts to carry a .083 batting average.

Between the two series, Moore watched video of his plate appearances and noticed he was breathing heavier than normal. Perhaps it was because of nerves, which would be understandable given Moore is playing for the Razorbacks this year because he graduated high school early and chose to forego his final season of playing at Shawnee Mission East.

“I’m just trying to slow it down and just take deep breaths,” Moore said following a 3-for-3 performance Saturday.

“We sat down one day (last week) because I felt like he was trying to do a little too much, be a little too big opening weekend,” Thompson said. “He hit some balls hard (against EIU) but he was just chasing a little too much. That’s not his game and not what he does.

“I told him, ‘Hey, if you get a cookie hammer it, but if not it’s OK to get deeper into your at-bat because you’re a good hitter with two strikes.’ I think that was a little bit of a calming thing for him.”

Three of Moore’s hits came with two strikes against Gonzaga, including his first career home run during the sixth inning Saturday. All four of his walks came during at-bats where the count ran full.

Moore is a switch hitter and most of his success came from the left side against Gonzaga, which threw only right handers in the final 22 innings of the series. But Thompson said Moore is equally capable from either side of the plate. In fact, for the season Moore is batting .600 against left handers as opposed to .316 against right handers, albeit in 14 fewer at-bats.

“The right-handed swing is maybe a little different swing,” Thompson said. “He’s a right-handed thrower so his right arm is a little more dominant, and that changes how he tries to manipulate the barrel.

“Throughout his life he’s had a ton of at-bats left handed just because the world is right handed. I think he’s good from both.”

Moore has provided a big spark at the bottom of the order. Prior to the Gonzaga series, Thompson told him that he needed to produce because Kjerstad, who hit four home runs and had 10 RBI in the opening series, was being moved up to the No. 2 position in the lineup.

Moore batted ninth in the first two games of the Gonzaga series, but moved to the No. 8 hole in the final two games to allow the Razorbacks to stagger right- and left-handed hitters.

“I told him, ‘If we end up moving Kjerstad to the two, then it’s really important if you’re in the nine hole, we need you or the one hole on base,’” Thompson said. “I don’t want Kjerstad coming up there with no one on, if at all possible.”

Moore was on base four times when Kjerstad came to the plate during the series - twice as the No. 8 hitter and twice as the No. 9. Arkansas coach Dave Van Horn said he has been happy with the bottom of the lineup, including Moore.

“As of right now I like the way our lineup feels, for the most part, with the guys that are either hitting 6, 7, 8, 9,” Van Horn said, “because sometimes pitchers might go, ‘Oh, OK, I’m at the end of the order,’ and they relax. Before you know it, we’ve got a single and a double because I have confidence in those guys.”

Van Horn and Thompson both said it appears the hitters around Moore are feeding off his enthusiasm. Van Horn called him “an energy giver,” a characteristic Thompson said he has seen daily since Moore arrived on campus last month.

“I’ve seen it for several years now when he’s playing summer ball or high school baseball, he makes his teammates better,” Thompson said. “That’s what we want out of all our guys. Do you make us feel happy to see you every day or are we going to get depressed? He’s obviously making everybody happy.”

That happiness extends back to Kansas, where Gorden said he has become a Razorback fan and watches as many games as possible. He and Moore have communicated regularly.

“Every time I talk to him it’s always about the Hogs winning,” Gorden said. “It’s never about his own personal level of play. He’s all about whether or not Arkansas gets that (win) at the end of the day.

“On the play that made SportsCenter, he flips it over there with the glove and he just keeps running to the dugout. I like that part just as much as I did the flip. And I like seeing him on the top step when other guys are having success.

“He dictates the level of intensity from practice to game play. Really, it’s intensity, but it’s an enthusiasm and it’s 100 percent pure. He loves playing baseball and he understands how lucky he is to be playing where he’s playing and when he’s playing. I don’t know if I’ve ever seen the kid have a bad day at the ballpark in terms of enjoyment of the game. If he goes 0-for-4 or 4-for-4, he’s going to make sure he’s having a good time out on that baseball field.”

Can Moore continue this level of play as a freshman as the competition gets more difficult? Gorden says he can.

“I’ve never seen any kid work harder than him,” Gorden said. “No one is going to outwork him. It’s just a joy to sit back and watch him do what he does.

“I don’t think it really matters if it’s Gonzaga or it’s LSU, he’s going to come out and compete the very best he can.”