Arkansas women, men look to run away with titles at SEC Indoors 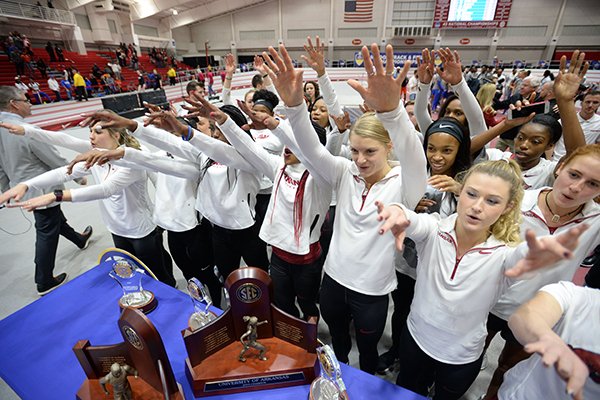 “A lot of kids that are on this team have never not won,” Harter said. “That’s all they know. Hopefully some of our newcomers are willing to fight and battle like some of our predecessors. Our alumni established that type of tradition, and hopefully our young ones will follow suit by the example that has already been set up for them.”

Some eligible not just as past example setters but current major scorers won’t be scoring. They’re redshirting, either injured or as current seniors Harter wants eligible for the 2021 NCAA Indoor Championships that Arkansas hosts.

“They’d probably push for the top half of the conference,” Harter said. “They definitely have some scoring firepower; there’s no doubt about it.”

Subtract them and so many Arkansas 2019 senior All-Americans propelling last year’s SEC and NCAA Indoor and Outdoor Track titles, how can Arkansas repeat its SEC Indoor title?

“Considering some of the decisions we’ve made to redshirt and save some of our people for this next year and also our outdoor season, we’re going to make it very, very close,” Harter concedes, though certainly not conceding the championship.

“I don’t have a lot of friends in the SEC as far as in the battle of competition because we’ve been so dominant the past few years,” Harter said smiling. “So if there’s a person that stands alone a lot of the time at meets, it’s myself.”

So Bucknam hasn’t enjoyed recent company with no SEC titles since 2017.

After a rash of injuries and close but no cigars into last year overachieving just to be SEC Indoor and Outdoor runner-up, Bucknam and assistants Doug Case and Mario Sategna believe they have the across the board healthy firepower again truly to contend.

“We’re very diversified from sprints, jumps, hurdles, distance,” Case said. “The guys feel like we’re in it to win it.”