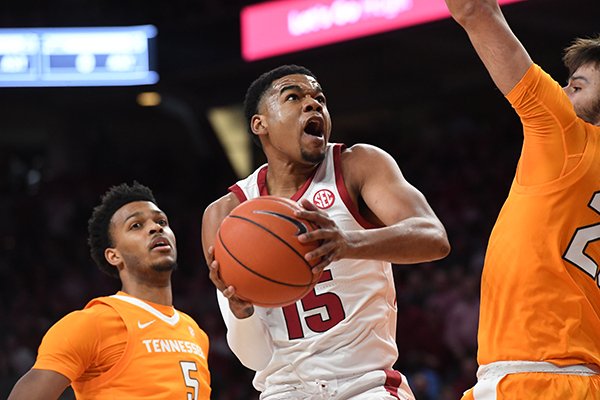 Arkansas' Mason Jones goes up for a shot during a game against Tennessee on Wednesday, Feb. 26, 2020, in Fayetteville.

Jones scored 30-plus points for the ninth time in his Razorbacks career and seventh time this season. He eclipsed the 1,000-point mark in his second season in the game as well.

Isaiah Joe added 22 points and Desi Sills chipped in 13 as Arkansas improves to 18-10 overall and 6-9 in conference play. It travels to Georgia on Saturday for a 5 p.m. tip.

Jordan Bowden led Tennessee with 19 before fouling out late, but he scored just two points over the final 14-plus minutes. Bowden hit 4 of 10 3-point attempts. The Vols fall to 15-13 overall and 7-8 in the SEC.

Mason Jones has 35 points tonight. He's been fantastic. The Razorbacks are plus-21 with Jones on the floor tonight.

Isaiah Joe also has 14 points tonight and Desi Sills 13. Arkansas is shooting 54.2 percent from the floor in the second half and 50 percent for the game. The Razorbacks have hit 9 of 21 from 3.

Mason Jones is on fire. No one on the Tennessee roster can check him right now.

Jones has 31 points tonight, 16 in the second half, and just hit back-to-back ridiculously deep 3s to give Arkansas its largest lead of the night. He has now scored 30-plus nine times in his career, seven times this season.

Isaiah Joe has scored nine of his 14 points since halftime, complementing Jones. I swear he looks quicker off the bounce post-surgery than pre-surgery. I've been impressed with the ease at which he's gotten to the rim tonight.

Jordan Bowden has only two points in the last seven minutes. That's been key for Arkansas in gaining separation.

The Vols pulled within two points on Jordan Bowden's midrange pullup from the foul line, but the Razorbacks have answered emphatically.

Behind Mason Jones, Desi Sills and Isaiah Joe, Arkansas has ripped off an 11-2 run over the last two minutes. Jones got a layup to go plus the foul, Sills buried a left-corner 3, then Joe added a deep 3 immediately after. Joe also took his man off the bounce and scored at the rim prior to the timeout.

Jones leads with 19 and Joe has 12, Sills 11. Bowden has 17 for Tennessee. Ethan Henderson has tied a career high with three blocks tonight. His last one on John Fulkerson was big time.

Isaiah Joe just provided the Razorbacks a stabilizing bucket, cutting baseline for a left-handed layup through contact. He's up to seven points tonight.

Jordan Bowden is having himself a night. He's got 13 points on 4 of 7 from 3-point range after entering shooting just 19.7 percent beyond the arc in league play. John Fulkerson has five of his 10 points since halftime. With Adrio Bailey out, Tennessee is going at Ethan Henderson.

Reggie Chaney has checked in. He got only one minute of run in the first half. Arkansas needs some energy and rebounding out of him.

The Vols are on an 8-0 run, and Eric Musselman calls for time.

Adrio Bailey picked up his third and fourth fouls in a matter of seconds, sending him to the bench. Desi Sills replaces him.

Arkansas is 1 of 5 from the floor to start the half. Ethan Henderson, who has eight rebounds, just missed a chippy at the rim.

Rick Barnes did not like the Vols' first two defensive possessions of the half.

Jimmy Whitt hit Adrio Bailey for a layup above the rim on the opening possession, then Mason Jones drove right around John Fulkerson on the second, but missed the layup. Moments after Tennessee rebounded the miss and Santiago Vescovi brought the ball across halfcourt, Barnes called for time.

The layup was Bailey's first score of the night. He sat the final 7:40 of the first half with two fouls. Ethan Henderson now has a game-high seven rebounds. Active.

Heck of a first 20 minutes from the Razorbacks.

Mason Jones led all scorers with 15 points in the first half on 4 of 10 shooting and 6 of 8 at the line. He added two assists and one rebound as well. He reached the 1,000-point mark in his Arkansas career with his first free throw of the night.

Jones is the eighth Razorbacks player to get there in two seasons. He's been a bucket all season.

Desi Sills provided eight big points off the bench, too, on a pair of 3s from the left side of the floor and a really, really filthy euro step for a layup. Jimmy Whitt scored six points and Isaiah Joe pitched in five.

Joe sat the final 2-plus minutes after picking up his second foul.

Jordan Bowden was about the only source of offense for the Vols prior to halftime. He has a team-high 10 and Davonte Gaines has six. Star freshman Santiago Vescovi added only two points on 1 of 5 from the floor and 0 of 3 from deep. He turned the ball over three times.

That really was a terrific half of basketball from Arkansas. Got big contributions from Ethan Henderson and Jalen Harris as well. Henderson grabbed six rebounds in his 15 minutes. The Razorbacks outscored the Vols by 12 with him on the floor.

Jalen Harris just turned in one of his better sequences of the season to push the Razorbacks' lead to 15.

He drove under the rim and pitched out to Isaiah Joe for a wide open right-wing 3, then dove on the floor for a loose ball. On the ensuing possession, the ball found him on the right wing and he buried a triple, forcing Rick Barnes to call timeout.

Joe has five points and two steals for the Razorbacks. Jimmy Whitt and Desi Sills each have six, and Mason Jones leads with 13.

The only buckets the Razorbacks got between the media timeouts were 3s from Desi Sills.

His first bucket came from the left corner on a great find my Isaiah Joe. The second was a bit of a force late in the shot clock, but it found nothing but net. Sills has six points and is plus-4 in his eight minutes so far.

Jordan Bowden of Tennessee entered tonight shooting just 19.7 percent from 3 in SEC play. He is 2 of 3 tonight, and his second triple came just before the shot clock expired and over the outstretched left arm of Isaiah Joe.

Santiago Vescovi is a minus-15 for the Vols to this point.

Mason Jones seems to be well on his way to another big scoring night. He has 13 points so far on 4 of 6 shooting and 1 of 2 from deep. Jones is also 4 of 4 at the line.

On his first free throw attempt, he reached the 1,000-point mark in his Arkansas career, becoming the 44th Razorbacks player to do so. Only eight others have done it in two seasons, and he did it in 61 games.

Ethan Henderson was perhaps a surprise add to the starting lineup tonight, but he's made Eric Musselman look like a genius early.

Henderson has four rebounds, three offensive, and two points, which he scored on a putback. He also blocked a shot. The man has been everywhere in the opening four minutes. Well done.

Mason Jones will be at the line when play resumes. Isaiah Joe pitched ahead to Jones in transition following Santiago Vescovi's second turnover of the night and drew contact. He wanted a goaltend, too, but I don't think he's going to get it.

Heck of a start for the Razorbacks, who desperately need a win to keep NCAA Tournament hopes alive.

I'm interested to see if Joe can come back out tonight and impact this game the way he did Saturday's against Missouri. Joe knocked down 5 of 10 from 3-point range and scored 21 points on the Tigers in his return from injury. He hit 5 of 6 3-point attempts from the right wing, which is a season high.

Can Jones settle back in, too, with Joe back? His nine shots taken last weekend were his fewest in a game since Jan. 15 against Vanderbilt (7). What I do like, though, is he has nine assists in the last two games. He has assisted on nine 3s and nine buckets in the lane this month.

Jones is five points away from 1,000 in his Arkansas career.

Whitt is dressed out tonight, but he was far from full speed in pre-game warmups. He looks to be favoring his back. He received extra on-court attention from strength coach Dave Richardson about 25 minutes before tipoff.

This will be Henderson's second career start. His first came in the loss at Florida last Tuesday. Desi Sills, who is averaging 14-plus points on 50-plus percent from 3 in his three games off the bench, will play a reserve role again tonight.

Vescovi and Bowden had their way with Arkansas in the teams' first meeting, combining for 36 points on 50 percent from the floor. Vescovi, a freshman who joined the Vols at semester, also recorded a career-high eight assists in Tennessee's 82-61 win.

Bowden scored 16 points on 7 of 16 shooting, 5 of 9 inside the arc. That is where Bowden hurt Arkansas most, Eric Musselman said. He is also a threat from the perimeter, but has struggled there in SEC play, knocking down 19.7 percent of 76 attempts.

Pons, according to KenPom analytics, has the second-highest block rate of any SEC defender who has played a minimum of 40 percent of his team's minutes. He has at least one block in each game this season, and Vols coach Rick Barnes considers the junior one of the best defenders in the league. Also keep an eye on Fulkerson, who ranks in the top 25 in the SEC in offensive and defensive rebound rate.