Hogs brush dirt out of their faces 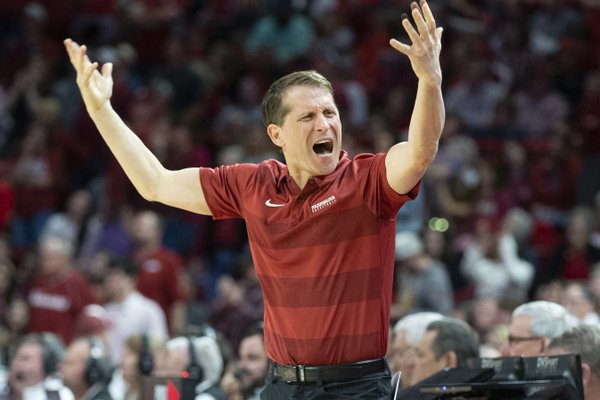 Eric Musselman reacts during the Razorbacks game against Mississippi State on Saturday, February 15, 2020.

FAYETTEVILLE -- University of Arkansas Coach Eric Musselman drew inspiration from a former college basketball player before the Razorbacks took on Missouri on Saturday at Walton Arena.

But it wasn't someone who is known for basketball.

Mark Calaway was a 6-10 center at Angelina (Texas) Community College and Texas Wesleyan, but the sport in which he became a superstar is professional wrestling.

Calaway is known as "The Undertaker" because oftentimes during his matches he'll rise out of a coffin. With the Razorbacks on a five-game losing streak, Musselman decided to imitate the wrestler for his players.

In a video posted on the Arkansas basketball Twitter account, Musselman is shown lying on the locker room floor with the Razorbacks looking on and rising up after the Razorbacks beat Missouri 78-68.

"We were in the coffin!" Musselman yelled as he sat up. "We won tonight and now we're here!"

Video of Calaway rising out of a coffin is then shown.

"Well, we kind of were laying on our backs after five straight losses," Musselman said. "I did it before the game, and we showed them video of 'The Undertaker' and how he comes up from his back and kind of rises.

"Just trying to have fun and loosen up the atmosphere, but also have a little bit of a message as well. I mean, I could stand up there and say, 'Hey, we've lost five in a row and let's win one.' Or after the game say, 'Good job.'

"So I just had some fun with them and illustrated what 'The Undertaker' does prior to his matches. And our AD likes wrestling, too."

Arkansas Athletic Director Hunter Yurachek said he is a big wrestling fan, and of "The Undertaker" in particular.

"A lot to times in a wrestling match, he'd look like he was down and out and laying flat on his back in a match where his opponent was going to pin him and it was going to be over," Yurachek said. "Then all of a sudden he would rise up and turn the tables on his opponent and win the match.

"I think that's what Eric was trying to instill in our guys. 'Hey, we've lost five in a row and everybody thinks we're down and out, and they're putting dirt on top of us like we're buried and the season's over. But this is an opportunity versus Missouri to rise up off the mat like 'The Undertaker' and win a game and get this season headed back in the direction it was.'

"Coaches are always trying to give their players a motivational message to focus on, and pulling something like that, I think it's easier for our young men to relate to when they see Eric rise up. I didn't give Eric the idea, but I could easily relate to it as a wrestling fan."

Musselman was asked during his radio show Monday night about the bad stretch being over.

Tennessee beat Arkansas 82-61 at Thompson-Boling Arena on Feb. 11 in the teams' first meeting. It was the Razorbacks' most-lopsided loss of the season.

"I feel like we came out flat," Bailey said. "We didn't have that pop like we usually play with."

"We definitely have to come out wanting to win, wanting to play," he said. "We've just got to be ready, got to communicate more defensively. We've got to lock in on their key players."

Vols freshman point guard Santiago Vescovi had 20 points and eight assists against Arkansas. He hit 6 of 10 shots -- including 3 of 4 three-pointers -- and 5 of 5 free throws.

"Their point guard really hurt us bad," Musselman said. "He did whatever he wanted. He shot threes, he assisted the ball, he got his teammates great looks. We had no answer whatsoever for Vescovi. Somehow we've got to be able to find an answer to try to beat them."

"He annihilated us, too," Musselman said. "I mean, we had no one to guard him, either."

Arkansas didn't have sophomore guard Isaiah Joe the first time it played Tennessee because he was in the midst of missing five consecutive games while recovering from knee surgery.

"It spreads the floor, because he is going to shoot it deep," Tennessee Coach Rick Barnes said of the impact of Joe's return. "He's got great range, and they have given him the ultimate green light to get shots and they work to get him shots. They will be a different team there then when they were here."

Arkansas suffered its five-game losing streak when Joe was out.

"I think when you look at a basketball team that doesn't have much depth and then you take away a player that's been playing 30 to 35 minutes a night for you -- a guy that's a really good defender, arguably one of the best three-point shooters in the entire nation -- we're going to miss that," Musselman said on his radio show. "Any team in college basketball is going to miss a star player, and we certainly missed Isaiah.

"We are a completely different team with him in uniform."

Arkansas rose three spots to No. 45 in the latest NCAA Evaluation Tool (NET) rankings -- a system adopted last year based on a team's strength of schedule and its opponents' strength of schedule as well as where games are played, margin of victory, and offensive and defensive efficiency after beating Missouri.

Musselman credited the Razorbacks' 12-1 nonconference record -- including victories at Indiana and Georgia Tech, and the lone loss at Western Kentucky in overtime -- with keeping Arkansas in the hunt for an NCAA Tournament berth despite the losing streak.

"Our guys did a great job in that nonconference of taking care of business," Musselman said on his radio show. "That's allowed us to still kind of be hanging around in these conversations."