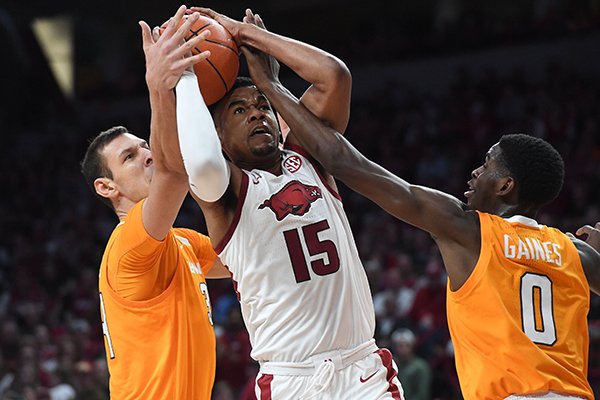 Arkansas' Mason Jones goes up for a shot as Tennessee's Davonte Gaines (0) and Uros Plavsic defend during a game Wednesday, Feb. 26, 2020, in Fayetteville.

Jones crossed the 30-point threshold on a step-back 3-pointer with 7:20 remaining that gave him 31 points. It was part of a stretch in which Jones scored eight consecutive points to extend Arkansas’ lead from 62-51 to 70-54.

His 37 points were his fourth highest in a game this season. He scored 41 against Tulsa in December, and earlier this month had 40 against Auburn and 38 against Mississippi State.

Jones became the 44th player to score 1,000 career points at Arkansas on Wednesday, and the fifth fastest to do so, according to HogStats.com.

Jones reached the milestone with the first of two made free throws with 15:58 remaining in the first half. He entered the game with 995 points.

It took Jones 61 games to score 1,000 points with the Razorbacks. He transferred to Arkansas prior to the 2018-19 season after playing one season at Connors (Okla.) State College.

Jones passed Robert McKenzie and Clint McDaniel for 42nd on the Razorbacks’ career scoring list during the first half against the Volunteers. He had 15 points by halftime.

Terry, who transferred from Hutchinson (Kan.) Community College, played two seasons at Arkansas from 1971-73. Williamson and Thurman played together for three seasons from 1992-95. Kok played four seasons from 1944-48.

Jones is the eighth Razorback to score 1,000 points during his second season with the program. In addition to Terry and Thurman, the others to do so were Todd Day, Bobby Portis, Dusty Hannahs, Daryl Macon and Jaylen Barford.

Williamson missed 13 games with a foot injury as a freshman and didn’t score his 1,000th point until the fourth game of his junior season. Kok didn’t play in his 58th game until midway through his junior season.

Tennessee handed Arkansas its worst loss of the season on Feb. 11 when the Volunteers won 82-61 in Knoxville, Tenn. The Razorbacks nearly returned the favor Wednesday.

Mason Jones atoned for one of his worst games of the season Wednesday.

During the Razorbacks’ loss at Tennessee, Jones made 1 of 10 shots and finished with nine points. He played 24 minutes in that game, his second lowest total of the season.

Former Arkansas coach Eddie Sutton was among the announced crowd of 14,101. He was shown on the arena video board during a first-half timeout and received a loud ovation.

Sutton, who also attended the Razorbacks’ game against Kentucky on Jan. 18 and was at the Red-White Game on Oct. 5, was named one of eight finalists for the Naismith Memorial Basketball Hall of Fame earlier this month. It is the seventh time Sutton has been a finalist for the game’s top lifetime achievement honor.

Finalists must receive 18 votes from the hall of fame’s 24-member honors committee to be elected. The 2020 hall of fame class will be announced during the Final Four weekend in Atlanta in April.

If Sutton is elected he would become the third individual in the hall who is associated with the Razorbacks. Nolan Richardson was inducted in 2014 and Sidney Moncrief was inducted last year.

Wednesday’s game was televised by SEC Network, but it did not make it on the network until there was 6:08 to play in the first half. The Razorbacks were leading 26-17 at the time.

The preceding game between South Carolina and Georgia went to overtime. The Gamecocks won 94-90.

In Arkansas’ loss at Tennessee on Feb. 11, the Razorbacks made only two field goals in the first 10 minutes and fell behind by as many as 19 points before halftime.

Henderson turned in a solid performance with 2 points, a career-high 9 rebounds and 3 blocks in 30 minutes. The Razorbacks outscored the Vols by 16 points when Henderson was on the floor.

Among Henderson’s highlights was a block of Tennessee’s John Fulkerson with 12:28 remaining and a charge taken on a drive by Santiago Vescovi with 8:56 to play. Henderson left the game to an ovation with just more than two minutes left in the game.

He made his first start at Florida last Wednesday when he scored a career-high seven points, but fouled out in 10 minutes. He committed three fouls against the Vols.

Henderson played only 30 seconds during the Razorbacks' win over Missouri last weekend.

Sonny Weems, who played two seasons at Arkansas from 2006-08, was introduced on the court during the final media timeout of the first half. Weems led the crowd in a hog call.

Weems played the 2018-19 season with the Guangdong Southern Tigers of the Chinese Basketball Association. He played 183 NBA games over four seasons between 2008-16 with the Denver Nuggets, Toronto Raptors, Phoenix Suns and Philadelphia 76ers.

Arkansas and Missouri both won Wednesday to remain in a tie for 10th in the SEC standings at 6-9.

The Razorbacks split their season series with Mizzou.

The Nos. 11-14 seeds in the league play on the first day of the tournament. Arkansas has never played on the tournament’s first day since it expanded to five days in 2013.

Tennessee coach Rick Barnes fell to 1-3 in games he has coached at Bud Walton Arena.

Tennessee leads the all-time series against Arkansas 22-21 after the teams split this year’s regular-season meetings.

The Vols had won three straight in the series. The Razorbacks’ most recent victory came in overtime on Dec. 30, 2017, by a score of 95-93 in Fayetteville.

Arkansas has won 11 of 15 meetings against Tennessee at home, including five in a row. The Vols’ last win in Fayetteville was on Feb. 4, 2009.

Arkansas is scheduled to play at Georgia on Saturday at 5 p.m.

The Bulldogs are 14-14 overall and 4-11 in SEC play following their overtime loss at South Carolina on Wednesday.

Georgia had won two straight following 65-55 upset of Auburn at home last Wednesday, and an 80-78 win at Vanderbilt last weekend when Tyree Crump hit a 3-pointer as time expired.

The Razorbacks have won three straight over Georgia and six of the last seven meetings.