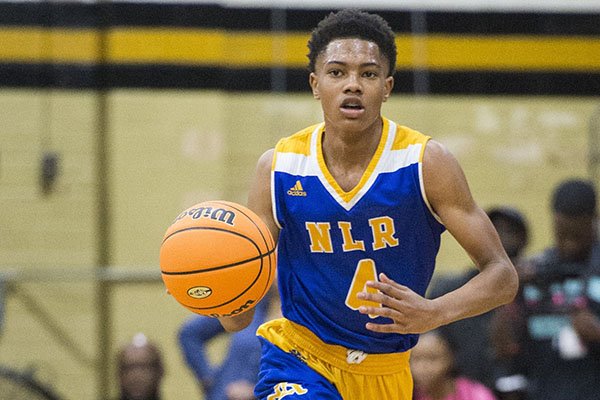 North Little Rock guard Bryson Warren (4) dribbles the ball up the floor during a game against Little Rock Central on Jan. 10, 2019, at Tiger Fieldhouse in Little Rock.

FORT SMITH — The youngest player on the floor during Friday night’s North Little Rock-Fort Smith Northside basketball showdown was also one of the most poised.

Freshman Bryson Warren (6-2, 160), who already has offers from Arkansas and Texas A&M, had 11 points to pace the No. 1 Charging Wildcats, whose 13-game winning streak was snapped 45-42 by the defending state champion Grizzlies.

“I put in a lot of work and it has started to pay off for me,” Warren said. “I have had the chance to work out with D-I college players and pro players and I have just tried to learn from them.

“Because of that, when I get on the court, age does’t really matter to me. It is just about playing basketball.”

Arkansas first-year coach Eric Musselman and his program hosted Warren on an unofficial visit for the Razorbacks’ game against Kentucky on Jan. 18.

“I really like Arkansas,” Warren said. “It was really loud. The fans were really into it. I like how they played, getting up and down the court, and I like how coach Musselman coaches.”

Warren, who is averaging 16 points per game this season, has impressed Northside senior forward and Arkansas pledge Jaylin Williams, who had a game-high 27 points on Friday.

Williams got a chance to first see Ware last summer when he went up against an AAU team featuring Bronny James, LeBron James’ 14-year-old son who already has an offer from Kentucky.

“He is a great player,” Williams said of Warren. “I thought, ‘Dang, he is good,’ and they told me he was from North Little Rock and I thought, 'Well, we are going to be playing against him then.'

“I saw him just getting better throughout the summer and he is just going to be a great player.”

“He is calm and cool,” Burnett said. “It’s impressive for a freshman to do that. That is pretty sweet to see him do that this early in his career.”

North Little Rock (21-4, 12-1) has already clinched the 6A-Central Conference crown and will travel to Cabot on Friday to close out the regular season before playing in the state tournament next week in Bryant.

“It really has been starting to come together for us defensively during these last few games,” Warren said. “We have really been buying in on that while the offense is going to take care of itself. We need to make sure that defense travels every game and not just the offense.

“We are just working on playing team defense, making sure we know where we're supposed to be at and knowing our roles."

Warren, who also has offers from Oral Roberts and Alcorn State and is getting interest from Oklahoma State, Vanderbilt and Auburn, doesn’t take getting better for granted.

“I continue to work on getting my body stronger and just all aspects of my game - my defense, polishing up my shot, conditioning to make sure I have legs in the fourth quarter. Just all that,” Warren said.

He will play AAU basketball this spring and summer with MoKan Elite, a program that once featured current NBA players Trae Young of the Atlanta Hawks and Michael Porter Jr. of the Denver Nuggets.

“I love how they come off the screen and pull up and how they look for their teammates," he said.