Razorbacks expect challenge from Sooners on the mound 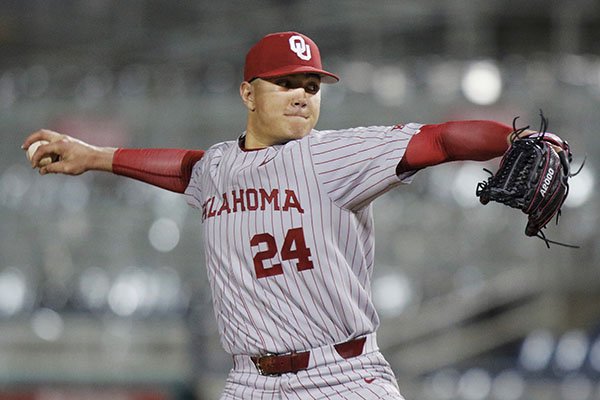 FAYETTEVILLE — Arkansas and Oklahoma will renew their baseball series Friday with a game at the Shriners Hospitals for Children College Classic in Houston.

It will be the first regular-season meeting between the teams since April 2012 when the Sooners won in Norman, Okla., and the first of two scheduled meetings this year. They are scheduled to play again March 17 at Chickasaw Bricktown Ballpark in Oklahoma City.

But Friday won’t be the first time this year’s Arkansas and Oklahoma clubs have seen each other on the field. They played in a fall scrimmage five months ago at Baum-Walker Stadium in Fayetteville. The Sooners won the 14-inning scrimmage by a score of 4-3.

Among that pitchers that night were Oklahoma junior right hander Cade Cavalli and Arkansas sophomore right hander Connor Noland, who are scheduled to start opposite of one another Friday at 3 p.m. at Minute Maid Park.

Cavalli pitched the first inning of the scrimmage and retired the side in 13 pitches. Noland, who entered in the fourth inning, allowed 1 run on 3 hits in 2 innings against the Sooners.

On Wednesday, Arkansas coach Dave Van Horn said his No. 5 Razorbacks (7-0) might be able to benefit a little from seeing Oklahoma so recently.

“I don’t think anything replaces seeing them physically on the field, compared to video,” Van Horn said. “You can see the speed of the game. You really get to have an idea of what they can be all about.

“You can look at video all you want, but when you get on the field with somebody, it’s usually a little better.”

Fourteen Sooner pitchers held down Arkansas’ lineup in the scrimmage last fall. The Razorbacks recorded six hits in the first nine innings. Hitting stats were not kept for the final five innings.

“I was impressed with Oklahoma’s arms,” Arkansas hitting coach Nate Thompson said this week. “I felt like they had a lot of firepower for the first eight-plus innings of that game, and they threw a different guy each inning. They had some real dudes on the mound.”

Oklahoma (7-2) enters Friday’s game with a 2.51 team ERA in games against Virginia, Texas Southern and Illinois State. In the season-opening series against Virginia that was played in Pensacola, Fla., the Sooners held the Cavaliers to a combined three runs in the final two games after losing 6-0 in the opener.

Texas Southern scored twice in two games against Oklahoma, and Illinois State scored four runs in the first three games against the Sooners before breaking through for a 7-5 victory in the finale.

Oklahoma’s opponents have been held to one or two runs in all seven of the team’s victories this year.

Cavalli, who pitched for the USA Baseball Collegiate Team last summer, is coming off a strong start against Illinois State when he allowed 1 run on 6 hits in 7 innings, and struck out 9. Baseball America rates Cavalli the No. 51 prospect in this year’s MLB Draft.

“Cavalli has got a big arm,” Van Horn said. “He’s got a good breaking ball. You look at what he did against us in one inning, it was very impressive. You go on his numbers so far this year, I think he’s pitched 11 (⅔) innings and only walked two, and this is a young man that’s throwing the ball like 97 mph every pitch.

"They’ve got good players. I got to watch them play one of their games live on opening weekend and they got after (Virginia) pretty good. They swung the bats pretty good....Good team."