State of the Hogs: Henry remembered for role in Hurricane Harvey rescue 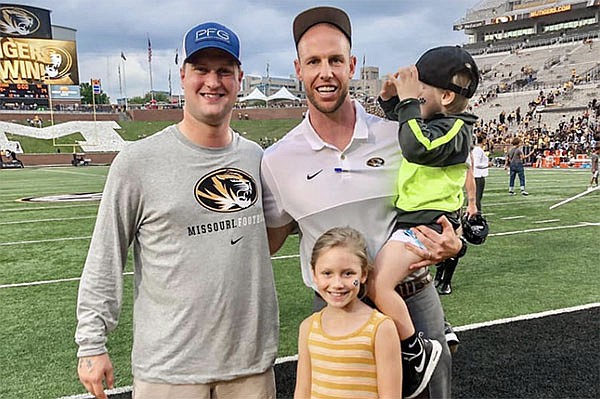 The Cajun Navy is famous for harrowing rescues in flood ravaged areas of the Gulf Coast in the aftermath of hurricanes. There are stories of heroic missions in small boats after Katrina, Harvey and many other storms.

Jon Gipson needed help well before the Cajun Navy arrived in Houston in August 2017 in the Harvey floods. Joseph Henry was his one-man Navy.

Gipson reached out to a reporter after reading a feature story on Henry to detail the new coaching staff hired by Sam Pittman at Arkansas. Henry, former Arkansas player, was hired as a quality control assistant coach this winter.

“I read your story and wanted Hog Nation to know a little bit more about Joe Henry,” Gipson said. “They have a great man, a great family. He’s going to be a head coach some day. I believe that in my heart.”

Basically, Gipson wanted to shout it to the Ozarks from his home in Houston that Henry is his personal hero, his personal Razorback Navy.

Henry happy to be back in Fayetteville

Henry did not have a boat, but it would have been a better idea that August night in 2017. He had only an SUV for a rescue mission two days after a reservoir in the Houston area was turned loose. Homes began to flood, mostly with people still in them.

“We knew that reservoir was going to be released, but we thought we had six more hours to load and move,” Gipson said. “And, they said it would be released at a certain level, but it turned out they let loose much more than that. We went to bed that night with direct word that it would be later the next day before we’d have to leave. We thought we were going to have an easy evacuation.”

That turned out to be wrong info. So as flood waters came up in the drive way and into the house early the next morning, the Gipson family set out on foot to get away from the rising water.

“It was higher than the engine blocks in our vehicles,” he said. “So my wife, kids and I loaded three dogs and clothes for a day into plastic garbage can that floated. We walked away from our home.”

The first night was spent in a community center. But it flooded the next morning.

“The National Guard wasn’t there yet,” Gipson said. “The Cajun Navy didn’t have permission yet either. So after being up all night, we left on foot again and found a high spot, a parking lot (at a drug store). There was a dump truck coming through, and some families talked the driver into breaking some rules and took us a few blocks to a higher dry spot.”

That was in the early evening of the second day of being homeless.

“I’ve literally got thousands of friends scattered across the country who would come in a second, but no one could in that situation,” he said. “Hurricane Harvey was tough and it didn’t care much about relationships.

“We literally were homeless and it was scary and dangerous, us and that garbage can.”

That’s when “phone a friend” kicked in, and the Razorback Navy was alerted. It was pretty deep into his contact list that someone knew someone close to where they were stranded.

“My son’s fiancé is from Birmingham and knew Grace, Joe’s wife,” Gipson said. “She called Grace and she sent Joe out looking for us.”

Henry, then tight ends/backfield coach at Prairie View A&M, lived about 20 minutes from where they were stranded.

“Only one problem, most of the streets and neighborhoods were flooded,” Gipson said. “It was dark, with no street lights.

“You couldn’t see how deep the water was on the road and things were changing by the minute. Joe just would go down a street, then have to back track and try another neighborhood, turning and retreating. There were lots of dead ends. It was a long process, over three hours.”

There were points where the Gipson family did not think Henry would get to them because cell phone service came and went.

“The dump truck found a dry spot under a bridge on I-10 and suddenly, there was Joe,” Gipson said. “He loaded us all up and then found his way back to his house. It was dangerous for him to get to us and just as dangerous to get back to his house. Water was rising and safe roads were suddenly gone. We stayed at their home for two weeks.”

Henry laughs about it now.

"I found them in the back of a dump truck," he said. "That's how I met Jon and his family and I took them home for the next two weeks. We are close now."

Gipson spent the next day on the phone with his insurance, FEMA and his business clients sorting through procedures to get help.

“I own a business and I was worried as much for my clients that had been flooded as for our home,” he said. “So I was on the phone non stop. Literally, I was about to go crazy.”

By the second day, Henry had seen enough.

“Joe just said, ‘Come to practice today and forget about this for a few hours,’ and so I went with him for the day,” Gipson said. “It was really a big day for them, a major scrimmage. But he took me along.

“First, let me say I knew that was a small college. I didn’t expect there to be much. I know the difference between Prairie View and LSU. I bleed purple and gold.

“But Prairie View has a great place, nice facilities and great people. And, what I saw blew me away. Everyone there just loved Joe Henry. Every player, every coach felt that way.

“I went to practice, then Joe took me to eat with the team. It was a scrimmage day and so the players were going over things with him afterward. I can tell you, they loved him beyond player and coach.”

Understandably, the Gipsons feel a love for Joe, Grace and their kids that is beyond that player-coach relationship. Jon said his son, Travis, is now extremely close to Joseph.

“I just want Razorback Nation to know what they’ve got,” he said. “We’ve kept up with him at Florida A&M and Missouri. We actually stored some of their furniture for two years and my son Travis hauled it to them at Missouri last year.

“Travis went to a game at Missouri and stayed with Joe and Grace. I’m sure we will go to a game at Arkansas now that they are with the Razorbacks.

“I feel good about what is going to happen with the Razorbacks. Obviously, I root for LSU, but I am pulling for Arkansas, too. It won’t be easy, but the Razorbacks are going to be on the road back.”

When things get tough, people in Arkansas talk about being stuck on a creek without a paddle. That may have been what it felt like in back-to-back 2-10 seasons, but Gipson thinks that is going to change with Joseph Henry around.