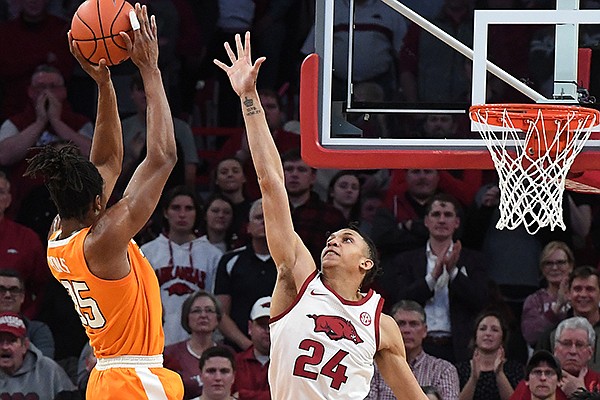 Arkansas' Ethan Henderson (24) tries to block a shot by Tennessee's Yves Pons during a game Wednesday, Feb. 26, 2020, in Fayetteville.

FAYETTEVILLE — As Tennessee learned on Wednesday, it probably isn't wise to direct your trash talk to Mason Jones.

Jones, the junior guard who surpassed 1,000 points in his Arkansas career in the win, poured in a game-high 37 points for the Razorbacks, who won their second consecutive game since Isaiah Joe's return from injury and impressively avenged an ugly loss in Knoxville on Feb. 11.

The SEC's leading scorer had it all working Wednesday. He finished 8 of 12 on attempts inside the 3-point line, knocked down three triples, including two in a 30-second span in the second half to virtually put the game away, and hit 12 of 15 free throws.

Following the game, Jones noted that no one bucket in particular got him going. It was chirping from the Tennessee side that resulted in him flipping the switch and turning in his seventh 30-point game of the season.

"What really ticks me off is when people start talking trash, trashing me or they talk trash to my teammates," Jones said. "That’s what really gets me going. Tonight, that’s what happened. I was just in the zone. I just knew that nobody can get in front of me because I know who I am.

"Don’t ever try to disrespect me because I don’t disrespect other people."

According to ESPN Stats & Info, Jones’ seventh 30-point game ties Kentucky's Jodie Meeks and LSU's Marcus Thornton for the most by an SEC player in the last 20 seasons.

The Razorbacks outscored Tennessee by 23 points with Jones on the floor and were minus-6 in the three minutes, 14 seconds he sat.

"Mason’s growth as a player has been really, really fun to be a part of and watch," Arkansas coach Eric Musselman said.

Jones, too, is the only Razorbacks player to ever hit 10-plus shots and 10-plus free throws in a game, per HogStats, and he has now done it twice this season – vs. Auburn, vs. Tennessee. Vols coach Rick Barnes echoed what many opposing coaches have said about Jones following games this season: He was terrific.

"We had no answer for him," he added. "He did it inside, he got to the free throw line, which I respect that as much as anything. He was feeling it obviously and he got going with it. Again, that's as good of a performance as we've seen all year against us."

Jones' big night sparked Arkansas' second-best night of the season in terms of offensive efficiency (127.9), according to KenPom.

"I still go home and dream that I’m still here because of all the hard work I’ve put in, all the trials I’ve been through just to get here," Jones said. "It’s just amazing. I just can’t really feel what I’m going through right now."

Entering Wednesday's game, Tennessee guard Santiago Vescovi owned the SEC's top assist rate, according to KenPom. The freshman from Uruguay had assisted on 32.6 percent of the Vols' scores when in the lineup since joining the team in January.

Arkansas guard Jimmy Whitt put a stop to all of that.

For the first time in his brief college career, Vescovi was held without an assist. His performance in Bud Walton Arena was obviously a far cry from the teams' first meeting when he dished out a career-high eight dimes in Tennessee's 82-61 win.

"We have not guarded a player like that at the collegiate level," Musselman said. "We didn’t do it at Nevada. Not going to go into a lot of detail because we could play them again, (but) overly proud that Jimmy was able to guard him and shade him the way that we wanted to, because it’s not an easy thing to do for 40 minutes.

"It was a calculated gamble, but we couldn’t have guarded him any worse (than in the first game). And then we changed our pick-and-roll coverage up before the Missouri game, and we’re playing pick and rolls differently now than we have. That’s a risky thing to do in the middle of the season with 4-5 games to go."

Vescovi, a 38.3 percent shooter beyond the arc in SEC play coming in, was also held without a made 3-pointer for the first time as well, finishing 0 of 4. He scored just two points in the first half on a floater in the lane with roughly two minutes to go, and one of his other two buckets after the break came off an Arkansas turnover in the backcourt when Tennessee implemented full-court pressure.

"Jimmy had an assignment to limit Vescovi and he did the best anybody could have done," said Isaiah Joe, who added 22 points in the win. "Jimmy is a great defender. People don’t see that, but that’s what he does. He’s going to play both sides of the ball and do anything he needs to do to get the win."

On top of slowing one of the conference's craftiest players, Whitt added six points, six rebounds, four assists and a pair of steals. The four assists are his most in an SEC game and most in any game since Valparaiso on Dec. 21.

Henderson a spark in starting role

Eric Musselman mentioned at his Monday press conference previewing Wednesday's game that he had a great feel for who four of his starters are.

The fifth starter, though, was up in the air.

Sophomore forward Ethan Henderson earned the starting nod against Tennessee, and he took full advantage, providing the Razorbacks with impactful minutes. Prior to the first media stoppage of the game, Henderson grabbed four rebounds, three offensive, blocked a shot and added a putback.

"He’s a young, developing player who didn’t get much of an opportunity last year, which a lot of freshmen don’t, and then same thing this year," Musselman said. "But he started picking up our terminology. We’ve seen a more focused player. We’ve seen tremendous growth in him coming into the gym at off hours. I just think he’s taking the game really, really serious of late and like I said, when a player doesn’t say much in practice, you wonder how much are they really grasping what we’re doing, the rotations?

"He’s been one of our most talkative players over the last two and a half weeks, and when he’s verbalizing stuff he lets us know, ‘Hey, I understand the whole picture of what we’re doing.’"

In his second career start - his first start came at Florida last Tuesday - Henderson finished with two points, a career-high nine rebounds and three blocks, which matched a career best.

He also took a charge on Santiago Vescovi.

"It kind of boosted me a little bit," Henderson said of being in the starting lineup. "Being able to start at home is like a big thing. I’m from Arkansas and it’s my first time starting in Bud Walton. I feel like I have more to prove. I have no room for error.

"I have to go out there and just play hard and block shots and get rebounds and do things that add up at the end of the game."

In his 29-plus minutes on the floor, Arkansas outscored the Vols by 16 points – the second-best mark on the team behind Mason Jones.

Isaiah Joe has shown very few, if any, signs of rust since returning from knee surgery last Saturday.

All he's done in his two games since sitting out two and a half weeks is score 20-plus points twice against a pair of solid defensive teams in Missouri and Tennessee. Joe poured in 21 points on 5 of 10 from 3-point range against the Tigers and added 22 more on Wednesday.

He hit just 2 of 8 from distance against the Vols, but he's shooting 7 of 18 (38.8 percent) beyond the arc since his return. What I like most, though, about Joe's game after some time away is he appears almost more explosive now than he was pre-injury.

On his two buckets inside the arc, and even on one attempt he missed, he was lightning quick and decisive, keeping opposing defenders off balance.

"We’ve got our pro back," Mason Jones said. "You see how we were before (Joe) got hurt. We were rolling and we were 16-5 and trying to get things going. We lost to Kentucky by what, 5-6? We went to Ole Miss and won that game and then Isaiah got hurt and that kind of set us back, but it really made us stronger as a team going through that streak.

"Now we feel we are getting things rolling."

Joe was solid defensively again as well. He finished with a pair of steals in the win and took two charges in the game's opening 10 minutes.

After Tennessee pulled to within 45-43 with 14 minutes to play, Joe provided the dagger in a 9-0 Arkansas run, a deep left-wing 3. The Vols never drew closer than nine points the rest of the way.

"He creates another gap for them, because you can't get into the gap like you really want to," Rick Barnes said. "When you're playing a team that really likes to drive the ball you've got to give that help, and he's a guy you can't get off of him that far. They move the ball well. They're going to get you in those isolations and you've got to be able to guard the ball.

"Again, he's a guy that stretches the floor for them. Him coming back and doing that, good for them, because they're definitely a different team with that group."