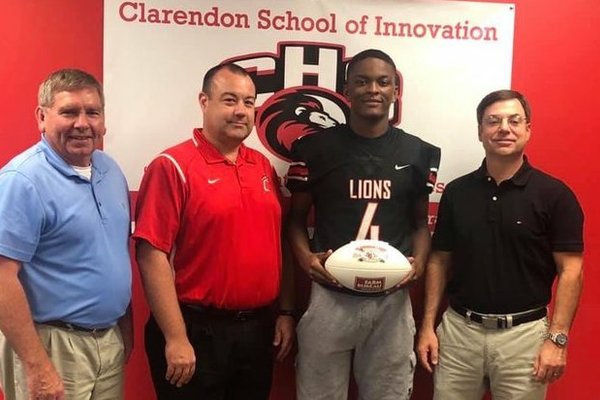 The 2022 class in Arkansas has a chance to be one of the better football classes the state has produced since 2008, when the Razorbacks signed 15 in-state prospects.

Clarendon sophomore athlete Quincey McAdoo has the looks of a high D-I prospect and is one to watch.

“He’s a tremendous athlete and has a high football IQ,” Clarendon coach Dusty Meek said. “Good student in the classroom. He has all the upside and potential going for him.”

Arkansas State has visited his school, and Arkansas is aware of McAdoo, but few other colleges know about him.

“I think it’s just a fact that he’s a sophomore,” Meek said. “I guess it’s just early. I’ve tried to contact people I know to get his name out there, so hopefully it will kind of start picking up as we move into the spring.”

“We’ll try and get him to some camps this summer.”

McAdoo, 6-2, 180 pounds, shows very good acceleration, quickness and elusiveness in the open field while having nice instincts on the defensive side of the ball. The Lions used him as an inside receiver and running back.

“In our situation, you stick him out there and people can double him,” Meek said. “We try to play him more as a inside receiver or in the backfield at running back and try to get him in space. He has running back skills.”

He was named All-Conference and honorable mention All-State after recording 65 carries for 622 yards, 8 touchdowns along with 19 catches for 345 yards and 3 touchdowns on offense. He also had 10 kickoff returns for 150 yards and 6 punt returns for 106 yards and a touchdown.

Meek believes the next time Clarendon measures the team it will show McAdoo has grown.

McAdoo, who recorded a time of 11.34 seconds in the 100 meters last year, also plays basketball for Clarendon.

He had an eye-opening 104 tackles on defense along with 2 forced fumbles, 2 recovered fumbles, 2 pass breakups and 4 interceptions, including one returned 90 yards for a score.

“We played him a little bit at linebacker and then eventually settled him in at free safety because he’s so rangy,” Meek said. “He likes contact - an excellent tackler.”