On to next mission: Big 12 teams await Hogs in Houston 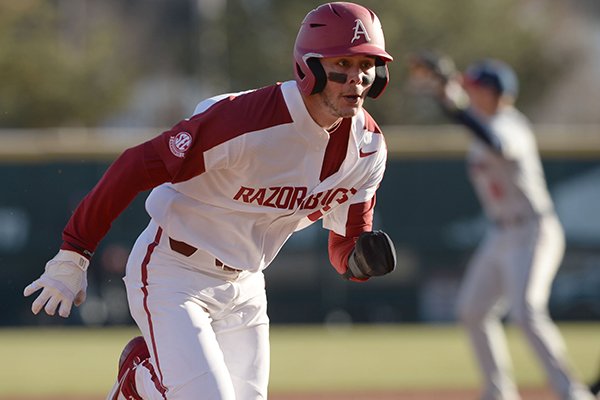 Arkansas first baseman Cole Austin heads to third base Friday, Feb. 21, 2020, on an RBI slash-bunt single by Robert Moore during the fifth inning at Baum-Walker Stadium in Fayetteville.

FAYETTEVILLE -- The level of competition for the No. 5 Arkansas Razorbacks goes up another tier this weekend at the 20th Shriners College Classic at Minute Maid Park in Houston.

After the Razorbacks (7-0) swept Eastern Illinois of the Ohio Valley Conference and Gonzaga of the West Coast Conference -- and never trailed in either series -- they will take on three Big 12 opponents at the major league park.

SHORT HOPS Arkansas is 5-1 in two previous appearances at the Shriners Hospitals for Children College Classic. The Razorbacks beat Texas Tech 3-1 and No. 21 Texas 7-3 and lost 4-1 to Houston in 2012. In the 2016 classic, the Razorbacks defeated No. 24 Rice 5-2, No. 9 Houston 12-3 and No. 23 Texas Tech 10-6. … In Arkansas’ 14-11 series edge over the Sooners, the Razorbacks have a 1-0 lead in neutral-site games, a 6-2 lead in games played in Fayetteville and a 7-9 disadvantage in games played in Norman, Okla. … Arkansas Coach Dave Van Horn is in pursuit of his 700th win with the Razorbacks. He cannot hit the milestone this weekend, with an Arkansas record of 696-384 heading into Houston, but he could do it next week.

In the other games today, Missouri will face Baylor at 11 a.m., and LSU will tangle with Texas at 7 p.m.

It's an SEC vs. Big 12 showdown all the way, with Arkansas, LSU and Missouri of the SEC squaring off against Baylor, Oklahoma and Texas of the Big 12.

"From the outside looking in, I think a lot of people think it's a big deal," Arkansas Coach Dave Van Horn said of the SEC vs. Big 12 aspect. "From our standpoint, I haven't really thought about it. I'm just trying to beat Oklahoma. To be honest, I wasn't sure who the third team from the SEC was in there. I knew Missouri was in there, I knew we weren't playing them. I knew we weren't playing the other team from the SEC, which is LSU. So, I guess each team is just focused on trying to win each day."

Wicklander thinks the level of competition is a good prelude to SEC play, which begins in two weeks.

"It'll be a lot of good experience, especially going into conference play," he said. "The three teams there are all SEC caliber. They could easily come into this league and be right in the mix. ... It's going to be a good weekend of competition."

Arkansas first baseman Cole Austin thinks the competition will help the Hogs gear up for big games to come.

Cavalli, a member of Team USA during the summer, goes beyond mid-90s mph on his fastball. The right-hander pitched the opening inning against the Razorbacks in a 4-3 exhibition win in 14 innings for the Sooners on Sept. 20 at Baum-Walker Stadium. Cavalli struck out Zack Gregory, and retired Christian Franklin and Casey Martin on ground balls.

"Cavalli has got a big arm," Van Horn said. "He's got a good breaking ball. You look at what he did against us in one inning, it was very impressive. You go on his numbers so far this year, I think he's pitched 11 innings and only walked two, and this is a young man that's throwing the ball like 97 miles an hour every pitch."

Noland pitched the fourth and fifth innings of the exhibition against the Sooners, allowing one run on Tanner Tredaway's homer to left field, and three hits.

Van Horn has brought two previous Arkansas teams to the Shriners College Classic at Minute Maid Park -- going 2-1 in 2012 and sweeping games against No. 24 Rice, No. 9 Houston and No. 23 Texas Tech in 2016 -- and has attended Astros playoff games there.

"It can be really jumpy to left," Van Horn said. "If you can pull the ball, you can get the ball off that wall with little more than a routine well-hit ball. Then you can get it in the seats pretty easy if you hook it down there and hit it decent.

"From left-center all the way over to the right-field corner, you have to hit it pretty good [to hit a home run]. But it can be real lively. They'll have an option to close that roof or leave it open with the weather and the temperatures this weekend."

The Sooners are 63rd nationally in batting average, 47th in ERA and 99th in scoring with 5.8 runs per game.