UA women at top of heap with Harter leading the way 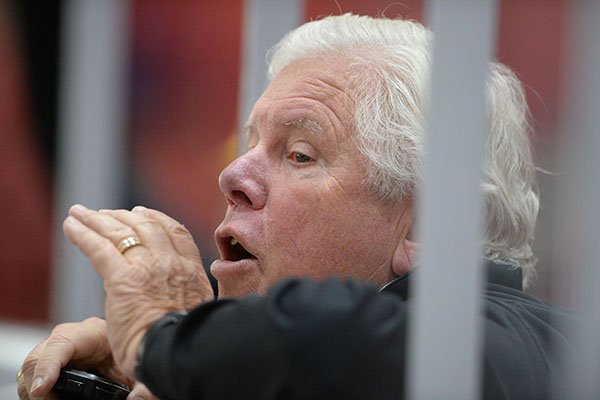 Arkansas coach Lance Harter directs his team Saturday, Feb. 1, 2020, from the edge of the track during the Razorback Invitational in the Randal Tyson Track Center in Fayetteville.

FAYETTEVILLE -- Lance Harter, head coach of the University of Arkansas' women's cross country and track and field teams, isn't the most popular guy at SEC meets.

"If there's a person that stands alone a lot of the time at meets, it's myself," Harter said. "I don't have a lot of friends in the SEC as far as in the battle of competition because we've been so dominant the past few years."

Since the 2013-14 school year, Harter has led the Razorbacks to 17 titles in 19 SEC competitions in cross county and indoor and outdoor track and field. Florida is the only other SEC team to win a conference title in that span with victories indoors in 2014 and outdoors in 2018.

Arkansas will look to continue its domination at the SEC Indoor Championships being held today and Saturday in College Station, Texas.

The SEC has five of the top six teams in the national rankings with No. 1 LSU, No. 2 Georgia, No. 3 Arkansas, No. 5 Texas A&M and No. 6 Kentucky. Southern California, ranked No. 4, is the only non-SEC team in the top six.

While Georgia figures to score well at the NCAA Championships, the Bulldogs likely don't have the depth to win an SEC title.

"I think it comes down to ourselves, LSU and possibly A&M," Harter said. "A&M has a tendency to rise when they're at home. But LSU has the firepower, especially in the sprints and the jumps that they could be very formidable."

The Razorbacks figure to be formidable in the distance races, led by senior Katie Izzo. The graduate transfer from Cal Poly-San Luis Obispo is the SEC leader in the mile and 3,000 and 5,000 meters. She'll run the 3,000 and 5,000 this weekend but not the mile.

"It's impossible to have her do all the events that she could potentially win," Harter said. "But we have some other people that definitely could step up and fill some of those voids."

Twin sisters Lexi Jacobus and Tori Hoggard, who combined to win six SEC pole vault titles the previous four years for Arkansas, have graduated, but the Razorbacks figure to again be strong in the event.

Senior Lauren Martinez, a graduate transfer from California, ranks second in the SEC at 14-41/2 in the SEC and Bailee McCorkle, a redshirt sophomore from Greenwood, is fifth at 14-23/4.

Gregory and Campbell are recovering from injuries and Werner and Baylark are sitting out so they'll be able to compete indoors next year when Arkansas hosts the NCAA meet.

Harter, asked how well the Razorbacks redshirting would score at the SEC meet if they were healthy and competing as a team, said they'd likely perform well enough to finish in the top half of the conference.

"Considering some of the decisions we've made to redshirt and save some of our people for next year and also our outdoor season, we're going to make it very, very close," Harter said. "In years past you had to be over 100 points. This year I think there's so much more parity across the SEC that you could be in the high 80s or low 90s and still possibly win the conference title."