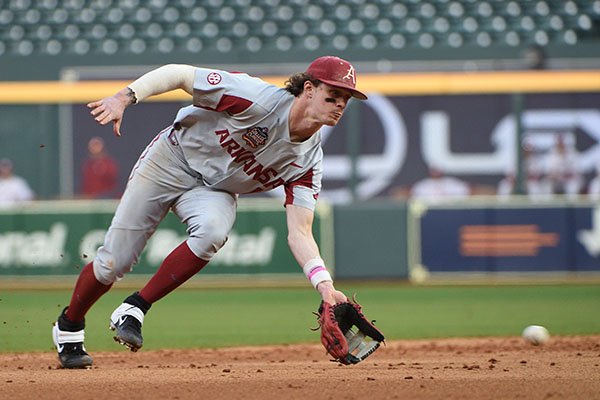 Arkansas shortstop Casey Martin fields a ball during a game against Oklahoma on Friday, Feb. 28, 2020, during the Shriners Hospitals for Children College Classic at Minute Maid Park in Houston.

HOUSTON — Arkansas coach Dave Van Horn can stomach a loss if he feels like his team played hard, played smart and gave itself a chance to win.

But he felt like his No. 5 Razorbacks handed a 6-3 victory to Oklahoma on Friday at the Shriners Hospitals for Children College Classic at Minute Maid Park by allowing four unearned runs, including three in the bottom of the seventh after the game was tied 3-3.

That meltdown came after Robert Moore and Jacob Nesbit had hit back-to-back home runs in the fifth inning off Oklahoma ace Cade Cavalli, who struck out 11 hitters, to give the Razorbacks 3-2 lead.

The Sooners tied the game when Brady Lindsly hit a holo home run off Arkansas starter Connor Noland in the sixth inning.

“We didn’t get the big hit, we just didn’t play well and didn’t give ourselves a chance to win,” Van Horn said. “We didn’t do anything to win the game. We basically just gave it away.”

The bottom of the seventh included two errors and a mental error. The Sooners had three hits in the inning, including a bunt single.

The trouble began with Arkansas shortstop Casey Martin sailing a throw into the stands behind first base with no outs, allowing Trent Brown to race to second.

Connor McKenna’s sacrifice bunt was then misplayed and thrown late to third base by relief pitcher Kevin Kopps, giving Oklahoma runners on the corners with no outs.

“I don’t know what happened there,” Van Horn said. “We had a physical error, threw the ball over the first baseman’s head, and you’ll have one of those every now and then. But then we had a bunt play all we needed to do was get an out at first.

“Somebody said three and we threw to three and my third baseman (Nesbit) acted like we had a force play. I have not talked to him yet, but obviously he must have thought there were runners at first and second for a split second.

“We haven’t seen that. It happens, but I don’t know what to say. He is a smart kid.”

Nesbit noted that the mental breakdowns were costly.

“It was just a couple of mental mistakes and those are going to happen, but there are no excuses for them,” Nesbit said. “Unfortunately we were the wrong end of it.”

Brandon Zaragoza followed with an RBI single that scored a second run on a wild throw from left fielder Braydon Webb before Tyler Harman singled in another run to make it 6-3.

Nesbit believes that Arkansas pitchers gave the team a chance to win, but the defense let them down,

“Our pitchers did great and gave us a chance, but unfortunately our defense didn’t back them up,” Nesbit said. “Hopefully we figure those things out.”

Arkansas (7-1) had a chance to extend its 3-2 lead when Christian Franklin singled with one out in the sixth and Casey Opitz doubled him to third against Oklahoma reliever Wyatt Olds.

Olds, who earned the win, fanned Cole Austin and Moore to end the top of the sixth and strand two of the Razorbacks' eight runners that were left on base. Arkansas also stranded two in the seventh inning after having first and second with no outs.

“We left runner after runner out there,” Van Horn said. “If you think about it, we had runners at second and third (in the sixth) and a 3-1 count and we swung at ball four. He (Austin) gets jammed, it was fouled and then he strikes out and the next guy (Moore) makes an out as well.”

Both teams had 10 hits, but Oklahoma (8-2) played errorless baseball.

The Sooners scored a run in both the second and third innings to go ahead 2-0. Both runs came against Noland, although Tanner Tredaway's run in the third was unearned after he advanced to third on a passed ball. Tredaway reached with a one-out double in the inning.

Noland held the Sooners scoreless in the fourth and fifth innings, and was taken out of the game after allowing a one-out hit in the sixth. Noland, who threw 70 pitches, allowed six hits and struck out five, but was hit hard on several fly balls to the outfield.

“Connor was fighting it a little bit today,” Van Horn said. “He was leaving pitches in the zone, maybe when he was even ahead in the count. They hit some doubles. The ball they hit out of the park to tie the game, the guy just went up and got a fastball and you have to give him credit.

“It seemed like once we got the lead 3-2, he went out and gave us a good inning and probably had his best stuff in the fifth or sixth inning. He fought through it and didn’t have his command as normal, but kept us in the game.

“We were only down 2-0, we take the lead and he gave us another inning or two. He competed hard and I like what I saw at the end.”

Van Horn is hoping that his team will use the loss as a wake up call as it prepares to take on Texas on Saturday at 7 p.m.

“You think it would wake them up a little bit just because we didn’t play good,” Van Horn said. "Oklahoma played good, got some big hits, took advantage of our mistakes.

“We’ll find out a little bit about our personality tomorrow when we see how we play.”