By: DAVID CAMPBELL Special to the Democrat-Gazette
Published: Saturday, February 29, 2020 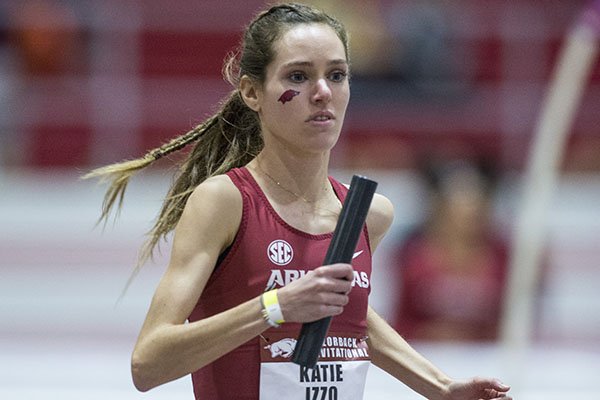 Arkansas' Katie Izzo competes in the women's distance medley relay during the Razorback Invitational on Friday, Jan. 31, 2020, in Fayetteville.

Izzo shot ahead against her competition and finished with an all-out sprint to the finish to rewrite the SEC record book Friday on the opening day of the SEC track and field championships.

"These championship races, people are trying to use as little energy as possible to save their legs for the next day," Izzo said. "I'm more of an honest racer. It feels weird to me to just relax. Yeah, I'd rather break away and not let anyone catch me."

"As a last-minute thing, I was looking at the heat sheet and I saw the SEC record was 15:53, and I had it in the back of my mind," Izzo said. "I wasn't sure what pace I needed to do and wasn't sure it was even possible, because I wanted to relax at the beginning. It was a huge bonus to get that."

Three Arkansas runners led most of the race in the men's 5,000. With nine laps left, Emmanuel Cheboson pushed forward and left the competition behind. He won in 13:52.72, and Matt Young finished third at 13:57.28.

"We were all helping each other, and I help my teammates out a lot," Cheboson said with a smile. "The time was good, but the most important thing was to win the championship."

LaQuan Nairn jumped a personal best 26 feet, 3 1/4 inches on his third attempt to take the long jump lead, then let out a huge yell that echoed throughout Gilliam Indoor Track Center. He held the lead until national leader Carey McCloud of Tennessee jumped 26-4 1/2, his first legal jump on his third try.

The high-caliber event saw McCloud jump 26-10 1/2 in the final, tying for the best long jump ever at the Texas A&M facility, which opened in 2009. Texas A&M's Will Williams set that mark in 2018 at the NCAA Indoor meet.

"I said Abba -- Abba means father -- to God," said Nairn, a senior from Nassau, Bahamas. "That's a moment where God was there, and I knew he was always with me. Just saying Abba, screaming it, I knew he was proud of me."

The level of competition in the long jump was stellar.

"You have to show up in the SEC," Nairn said. "In practice, there's nobody to push me, so I came into the meet knowing I had to go after it from the first jump. I didn't hit the board on my my first two and that put me out of sync. On that third jump, I knew it was going to be big."

Cameron Griffith anchored Arkansas to a comeback second-place finish in the distance medley relay, where the Razorbacks ran 9:42.00, trailing Ole Miss' winning 9:40.95. Luke George, Travean Caldwell and Reese Walters also competed in that quartet. With four of the 17 events complete, that pushed Arkansas into a 35-32 lead over Tennessee in the men's standings.

Arkansas' team of Carina Viljoen, Morgan Burks-Magee, Kennedy Thomson and Krissy Gear won the women's distance medley relay. Gear held back five contenders over the last 800 meters, surging in the final two laps to burn away the last hopefuls and win in 11:19.51. That lifted Arkansas in front of host Texas A&M with a 35-28 team lead. The women have finished five of 17 events.

Arkansas junior Markus Ballengee positioned himself for a run at the heptathlon title. Ballengee, who high jumped 6-6 1/4, is in second place with 3,096 points, trailing Georgia freshman Kyle Garland. Garland extended his overall lead by winning the high jump at 6-11, long after Ballengee had left the arena. Garland's overall lead is 218 points. Ballengee is 103 points in front of third-place Yariel Soto from Tennessee.

"I think I have the fastest seed time in the hurdles, and in the pole vault, I'm first or second as well," Ballengee said. "In the 2018 outdoor championships, I was 19th after the first day and finished up seventh place. I'm super excited and feeling good."

The Razorbacks had the top two qualifying times in the women's mile. Maddy Reed ran 4:50.82 to edge out Gear, who ran 4:50.90. Cameron Griffith won his heat to qualify for the final in the men's mile.

Other men's qualifiers for the Razorbacks were Keyshawn Andrews in the 60, Jalen Brown in the 400, Carl Elliott III in the 60 hurdles and Kieran Taylor in the 800.

Kris Hari jumped the gun in the 60 and was disqualified.

Thomson's qualifying time in the 800 was 2:08.50, which was second best. Other Arkansas women who moved to Saturday's finals were Paris Peoples in the 400 and Daszay Freeman in the 60 hurdles.