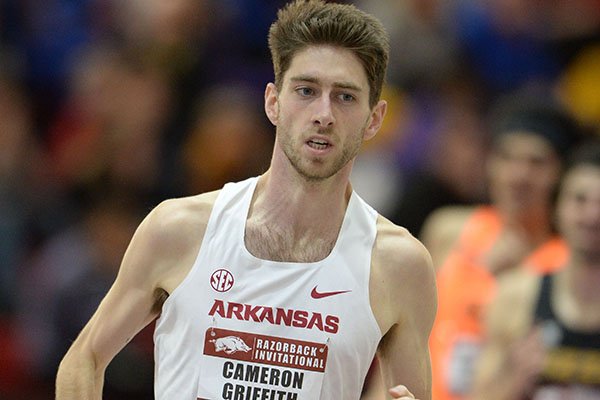 Arkansas' Cameron Griffith competes Saturday, Feb. 1, 2020, in the mile run during the Razorback Invitational in the Randal Tyson Track Center in Fayetteville.

Arkansas’ men scored 106 points to win their 35th conference championship indoors, and first title since 2017. The Razorbacks have won 23 indoor titles since joining the SEC.

The Razorbacks had second-place finishes from Laquan Nairn in the long jump, Griffith in the mile, Markus Ballengee in the heptathlon and from the distance medley relay and 1,600-meter relay teams.

Griffith, Chebosn (fourth), Gilbert Boit (sixth) and Matt Young (eighth) combined for 19 points in the 3,000 meters to clinch the team title for Arkansas.

Arkansas scored 58 of its points in three events combined - the 3,000 meters, the 5,000 meters and the heptathlon. Behind the champion Cheboson, Young finished third and Boit was sixth in the 5,000. Tyler Brendel (third), Daniel Spejcher (fifth) and Etamar Bhastekar (seventh) scored with Ballangee in the heptathlon.

Arkansas also had a first-place finish in the distance medley relay with a time of 11:19.51.

Krissy Gear added eight points with a second-place finish in the mile, and Arkansas had third-place finishes from G’Auna Edwards in the pentathlon, Devin Clark in the 5,000 and Bailee McCorkle in the pole vault.

Like the men, Arkansas’ women clinched the team title with a strong race in the 3,000. Viljoen finished fifth and Clark was sixth to give the Razorbacks 17 points in the race. Arkansas also scored 17 points in the 5,000 and scored 23 in the mile.

The women’s championship was Arkansas’ 18th in the past 20 SEC meets, also counting cross country and outdoor track & field. It was the 38th overall SEC championship for long-time Razorbacks coach Lance Harter, and his 10th indoors.