Bench gets production from Sills 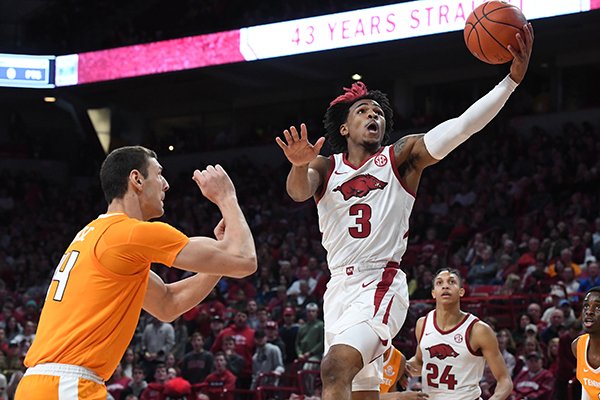 Arkansas' Desi Sills (3) goes up for a shot during a game against Tennessee on Wednesday, Feb. 26, 2020, in Fayetteville.

FAYETTEVILLE -- Look for sophomore guard Desi Sills to come off the bench for the University of Arkansas men's basketball team for a third consecutive game when the Razorbacks play Georgia today at Stegeman Coliseum.

Sills is averaging 9.4 points in 24 starts this season and 14.3 points in four games as a reserve, including 15.0 in the past two games to help the Razorbacks beat Missouri 78-68 and Tennessee 86-69 at home.

After Sills went scoreless for the first time this season in Arkansas' 73-59 loss at Florida on Feb. 18, Razorbacks Coach Eric Musselman brought him off the bench against Missouri last Saturday.

Sills scored 17 points against the Tigers -- his highest total in an SEC game -- and he hit 6 of 8 shots, including 4 of 6 three-pointers.

When Sills came off the bench against Tennessee on Wednesday night, he scored 13 points and hit 5 of 9 shots, including 3 of 5 three-pointers.

"We've seen his confidence grow offensively," Musselman said. "He told us, 'Just leave me coming off the bench.'

"It allows him to watch the game. He's basically sitting the first three minutes of each half, and then he's playing the whole game."

Sills played 33 and 31 minutes, respectively, in the past two games.

"He's done a great job, had a great attitude," Musselman said. "He knew that we were trying to figure out a way to get off to better starts, and he was a willing guy to accept, 'Hey, I'm not going to let it affect my game coming off the bench. Do what you want to do, and I'll play hard and try to provide the team whatever I can.' He's certainly done that the last two games."

Sills started the first 18 games this season, then after he scored two points at Mississippi State, Musselman brought him off the bench against TCU. Sills responded by scoring 18 points in 34 minutes when he hit 7 of 8 shots, including 4 of 4 three-pointers. He played off the bench again the next game against South Carolina and scored nine points, then returned to the starting lineup for seven games.

"I just see a new Desi," Arkansas junior guard Mason Jones said. "He's like Lou Williams. He comes off the bench and he's killing it now."

Williams, who plays for the Los Angeles Clippers, is a three-time winner of the NBA Sixth Man of the Year Award.

Arkansas has put itself back into the NCAA Tournament conversation by winning its past two games after suffering a five-game losing streak when guard Isaiah Joe was recovering from knee surgery.

But Coach Eric Musselman said it's still too early to get caught up in worrying about which bubble teams will get into the NCAA Tournament.

"There is just so much basketball to be played," Musselman said. "I mean, there is a whole third season about to begin when you talk about a conference tournament.

"Not just for us, but the WCC has a conference tournament, and we have no idea who is going to get the automatic bid in that conference.

"I thought we played with great pace," Razorbacks Coach Eric Musselman said. "Although Tennessee didn't have a high, high volume with 12 turnovers, we turned those turnovers into points. I thought that was really a key to the game, was live-ball turnovers as opposed to dead-ball turnovers."

Arkansas had seven turnovers, which tied for its fewest this season. The Razorbacks also had seven turnovers in a 75-55 victory over Vanderbilt, in an 82-61 loss at Tennessee, and in losses at LSU 79-77 and at Mississippi State 77-70.

Today's Arkansas-Georgia game is a sellout at Stegeman Coliseum, so the Bulldogs will set a school record for paid attendance in a season.

The Bulldogs' home finale against Florida also is a sellout.

A brief verbal exchange between Razorbacks Coach Eric Musselman and guard Desi Sills was picked up by SEC Network's microphones during the Arkansas-Tennessee game.

"You've got to fight over the screen," Musselman can be heard telling Sills. "And then you've got to jump."

Sills responded by admitting to Musselman that he made a mistake.

"Desi owned up to the fact that he missed an assignment," Musselman said. "There's not much to be said to a player other than, 'Great. Go make it happen.' Same thing when a ref says, 'Hey, I missed a call.' As a coach you can't say anything else.

"And when a player says, 'Hey, I missed an assignment,' you kind of go, 'Hey, great. Let's move on.' It's when a guy has an excuse of why he [wasn't] where he was supposed to be that it escalates."