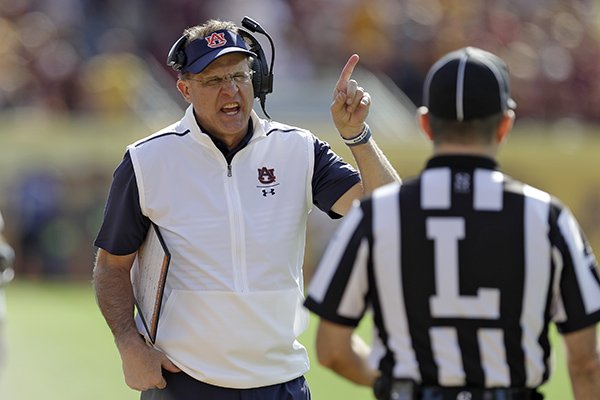 It may not have happened, but it wouldn’t have been a surprise.

And it wouldn’t have been the first time.

Gus Malzahn may have found a “for sale” sign in his yard on his return from the Outback Bowl — a prank by another disgruntled Auburn fan.

His Auburn Tigers lost Wednesday to Minnesota 31-24 in a game that wasn’t as close as the score. The Tigers got a touchdown on a 96-yard kickoff return.

Auburn’s offense — after hiring former University of Arkansas coach Chad Morris as offensive coordinator a few weeks back — put up Arkansas-like numbers with 232 yards of offense and just 13 first downs (one by penalty).

Morris was trending on social media after the game, mostly by Arkansas fans but there were some unhappy Tiger fans, too.

Morris most likely didn’t come to Auburn after being fired at Arkansas and install much of anything for the bowl game. Malzahn called the plays this season, and he probably had heavy input into the Outback Bowl game plan.

The loss, in which the Tigers were dominated at the line of scrimmage, dropped them to 9-4. Although tempers had cooled after the win over Alabama, they are probably boiling again.

While most programs would love to go 9-4 and play in the Outback Bowl, it isn’t good enough at Auburn. Another four-loss season could lead many Tiger fans to start a GoFundMe page to buy out Malzahn.

Alabama ended its season by beating Michigan — who plays in the Big Ten, like Minnesota — 35-16, outscoring the Wolverines 21-0 in the second half.

It could have been called the Someone Never Learns Bowl, as yours truly picked Michigan to win. Every time your trusty scribe picks against Alabama, the Crimson Tide win.

Nick Saban is a winner who has a reputation for not running up the score, but he changed his reputation a little on the Crimson Tide’s final drive.

Leading 28-16 and having owned the second half, Saban allowed Alabama to score a touchdown with 26 seconds to play instead of taking a knee.

It was a 12-play, 75-yard drive that consumed almost six minutes. A Michigan player called it a slap in the face.

More than likely it was Saban letting Michigan Coach Jim Harbaugh know firsthand that the SEC is the best football conference in the country.

Harbaugh did a lot of mouthing when he came to Michigan, and so far he has produced less than expected. His 47-18 record is good, but he can’t beat Ohio State and struggles in all the other big games.

In the nightcap, Georgia handled Baylor, although the Bears opened the second half with a vengeance by scoring two touchdowns after trailing 19-0. Then the Bulldogs’ defense put the clamps down on the Big 12 opponent.

Georgia was good but not sensational. Kirby Smart is working hard, but he has not caught Alabama.

Going into last night’s Gator Bowl matchup of Tennessee vs. Indiana, the only bowl losses by the SEC were from teams in the West Division. Auburn lost to Minnesota, and Mississippi State lost to Louisville 38-28 in the Music City Bowl, which isn’t a shocker.

According to some Bulldogs fans, Coach Joe Moorhead had one good game plan all year, and that was against Arkansas when he did what everyone else did — line up and run it down the Hogs’ throat.

The Vols were the last SEC team to play in a bowl game. Of course, the national championship game featuring LSU and Clemson is yet to come.

More on this game next week, but Clemson has championship game experience, but the Tigers are playing virtually a home game in New Orleans.