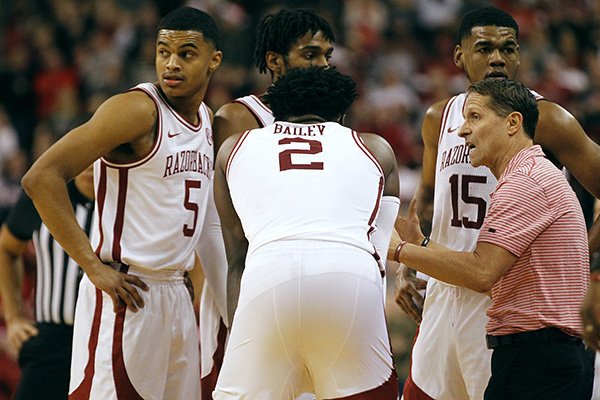 Arkansas head coach Eric Musselman talks to his players between free throws during the second half of the Razorbacks' 72-68 win over Valparaiso's on Saturday, Dec. 21, 2019, at Simmons Bank Arena in North Little Rock.

FAYETTEVILLE -- University of Arkansas men's basketball Coach Eric Musselman used seven players against Indiana's 10 in Sunday's game at Assembly Hall in Bloomington, Ind., but it was the Razorbacks who looked fresher at the end by pulling away to win 71-64.

"Who got tired tonight?" Musselman said on his postgame radio show. "The team with all the depth got tired. It wasn't Arkansas."

Arkansas outscored the Hoosiers 19-3 in the final 7:40 to hand Indiana its first home loss in 10 games at Assembly Hall this season.

All five Arkansas starters played at least 31 minutes, led by sophomore guard Isaiah Joe's 39. He didn't come out of the game in the second half, when he scored 18 of his game-high 24 points.

[Video not showing up above? Click here to watch » https://www.youtube.com/watch?v=28ReVvo-NR8]

The Razorbacks also pulled away late in the previous game to beat Valparaiso 72-68. They closed with a 23-9 run during the final 7:12 while using eight players in the game, with Joe playing 38 minutes and senior guard Jimmy Whitt 37.

Whitt said having a tight rotation helps the players get used to each other, which is especially important with Musselman in his first season as the Razorbacks' coach implementing new sets and schemes.

"There's a lot of familiarity with the players that are out there," Whitt said. "At the end of the game, it comes down to execution offensively and defensively, and we've been able to do that in big games with either big stops or big offensive possessions."

[Video not showing up above? Click here to watch » https://www.youtube.com/watch?v=s_MH0YYU_3E]

Earlier this season, Arkansas used eight players to beat South Dakota 77-56 and had a 15-4 run during the final 6:38 after the Coyotes cut a 19-point deficit to 10.

"I think there's this natural thing where, 'Hey, Arkansas is going to get tired as the game wears on,' and we know that's not going to be the case," said Musselman, whose Razorbacks open SEC play against Texas A&M on Saturday night in Walton Arena. "I think they've put themselves in great physical condition where we don't wear down mentally or physically during the course of a 40-minute game."

The Razorbacks (11-1) have used eight or fewer players in seven games, including seven in the second and third games -- victories over North Texas 66-43 and Montana 64-46 -- when sophomore forward Reggie Chaney was serving a three-game suspension.

"I think the Arkansas players pride themselves a lot on the conditioning work that they've put in. That's been apparent," said SEC Network analyst Andy Kennedy, who was Ole Miss' coach for 12 seasons. "From time to time you want to give your guys a rest, but if you look around the league, typically your best players are playing heavy minutes.

"That's been the recipe for Arkansas, and my assumption is that will continue moving forward."

Chaney has played in all nine games off the bench since his suspension was lifted, but senior forward Jeantal Cylla has seen his time dwindle to a combined 17 minutes in the previous six games after some struggles on offense and defense.

Arkansas overcame a shoulder injury to Jones -- who is averaging a team-high 19.7 points and 6.2 rebounds -- that caused him to miss the Razorbacks' 66-60 victory over Northern Kentucky when they used seven players. Joe and Sills each played 39 minutes, Whitt played 38, and junior guard Jalen Harris played 35.

"I think the summer conditioning becomes paramount for a team that doesn't have a deep roster, and our guys worked really hard all summer," Musselman said.

With a rotation of seven to eight players, they aren't looking over their shoulders to see whether they're coming out of the game after missing a shot or committing a turnover.

"I think there is beauty in being able to play through mistakes," Musselman said. "There's beauty in a lot of our guys are going to go into the game on Saturday and I'm not really subbing them, they're kind of subbing themselves, so to speak.

Whitt said it helps when the coaching staff has confidence in the players.

"It's hard to go out there if you're scared to make a mistake," Whitt said. "When you know you can make a couple of mistakes here and there and still play, it's a big confidence builder. Guys can just play like themselves."

Musselman said he sometimes will take out a player 30 or so seconds before a media timeout.

"You get them a little bit more of an extended blow than just 30 seconds," he said. "You look at the stat sheet and you think the guy's only been out for 30 seconds, but in reality, he's also been out during that timeout segment. So it's a consecutive two-and-a-half minutes."