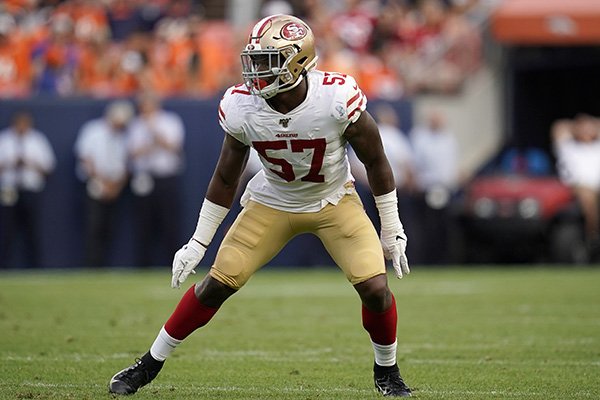 FAYETTEVILLE -- Dre Greenlaw made the final tackle of the 100th season of the NFL regular season last Sunday night in front of a national television audience.

Greenlaw's stonewall of a tackle on Seattle tight end Jacob Hollister on about the 1-inch line preserved San Francisco's 26-21 victory over the Seahawks and clinched the top playoff seed in the NFC for the 49ers.

It was a strong statement to end the NFL's 100th regular season.

"It's crazy when you put it like that," said Greenlaw, the former standout linebacker at Fayetteville High School and the University of Arkansas. "Yeah, it kind of hasn't really sunk in yet."

Greenlaw, a fifth-round pick by the 49ers in April's NFL Draft, has had a dream-like rookie season with 92 tackles and a growing fan base in the Bay Area.

Greenlaw took over as the starter at weak-side linebacker the first week of November after Kwon Alexander went down with a pectoral muscle injury.

"Yeah, it's hard to imagine," Greenlaw said of the success he and the 49ers have had. "This is my first year. But just coming from Arkansas, I think the best season I had was 8-5, so the way the season went here and just being a part of this team and group of guys, you never know what to expect.

"But at the same time, we worked hard, and I think everybody was bought in, so I felt like this was the team to be on. We all put that work in and did what the coaches asked. It's crazy that your first year here we're NFC West champions."

Greenlaw's stop inside the 1 came against Hollister, the twin brother of Greenlaw's Arkansas teammate Cody Hollister. The big lick, which stood up to a replay review, sent reverberations through the NFL and across Arkansas.

"I jumped out of bed," said Bauxite High Coach Daryl Patton, Greenlaw's coach at Fayetteville High. "It was a perfect tackle."

San Francisco media outlets compared his goal-line stop to that of Dan Bunz, who like Greenlaw wore No. 57 for the 49ers, inches short of the end zone to help preserve a 26-21 victory over the Cincinnati Bengals in Super Bowl XVI.

Bunz told the San Francisco Chronicle he had been tracking Greenlaw this season well before the big hit.

"I'm really glad," Bunz told the newspaper. "He's not real big, but he hits and he hustles and he's flying around. You know how it is when it's a guy wearing your number. So I've been watching him."

Greenlaw made ripples in Arkansas on draft day for a story that came out of left field from an appreciative father, and again late in the season, when he announced himself as "Dre Greenlaw, linebacker, University of Ar-Kansas" on Sunday Night Football.

The same player intro aired early in the 49ers win over the Seahawks on the final day of the regular season last Sunday.

Greenlaw wrote on his Twitter account prior to the game, "I couldn't get the name changed Arkansas so forgive me."

He explained the mispronunciation.

"Basically me and Kwon Alexander, it was LSU-Arkansas [week], so we made a bet," Greenlaw said. "If Arkansas loses, I've got to say 'Ar-Kansas,' but if LSU loses then for a whole year he's got to say 'LS-Who.'

"It was just a straight-up bet. He's the one who came up with it. Man, I couldn't turn it down."

On the day Greenlaw was drafted on May 3, a man named Gerry Dales posted on Twitter an account of an incident his daughter was involved in during Greenlaw's freshman year at Arkansas in 2015.

Dales wrote that his daughter, who was also a freshman from Fayetteville High, went to a party and that someone "slipped something into her drink when she wasn't paying attention."

Later, when a guy tried to steer his daughter out the front door, Dales wrote, "[Greenlaw] stopped the guy and said, 'She's not going anywhere.'"

Dales publicly thanked Greenlaw and added, "Do me a favor. Root for Dre. He's a good kid with a good heart."

Greenlaw acknowledged the incident earlier this season with reporters in San Francisco.

"It's huge," Greenlaw said. "I definitely work hard for my image. I'm definitely not a perfect guy but I feel like I do things that are right for the most part. It matters what people think about you. So I mean I just naturally try to do the right thing."

Greenlaw, a foster child who was taken in as a youth and eventually adopted by Brian and Nanci Early in Fayetteville, got to make a statement when the 49ers engaged in an initiative this season called "My Cause, My Cleats."

Greenlaw's cleats supported foster youth, a cause for which he plans to make a charitable move during the offseason.

Greenlaw won over thousands of fans in Arkansas and now he's doing the same in California.

"They love him out in San Fran," Patton said. "I think the fans have adopted him once they heard his story. I'm very proud of him. I've used his story a million times with my kids.

"I think he's a kid that has learned over the years. I know some of the things Brian Early has instilled in him. You take your lunch pail and go to work. There are probably guys who are bigger, faster and stronger, but I don't think there's anyone as good as him on game day.

"He's got the name Big Play Dre, and now he's doing it in the NFL."