Five-guard lineup works at the end for Razorbacks 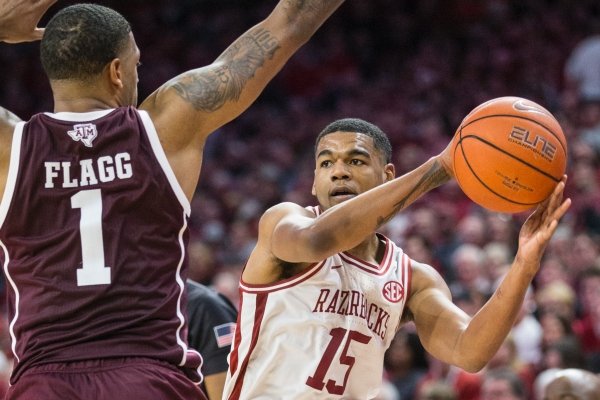 Mason Jones, Arkansas guard, passes the ball in the second half vs Texas A&M Saturday, Jan. 4, 2020, at Bud Walton Arena in Fayetteville.

FAYETTEVILLE -- The University of Arkansas basketball team has played small ball all season, but the Razorbacks went even smaller down the stretch to beat Texas A&M 69-59 on Saturday night in Walton Arena.

Razorbacks Coach Eric Musselman went with a five-guard lineup the final 12:12, when Arkansas outscored the Aggies 19-11 to finally pull away.

Musselman chose to go with the 6-2 Harris rather than 6-8 sophomore Reggie Chaney, who had turnovers on three consecutive possessions in the first half and played just seven minutes.

Substituting Harris for Bailey made Jones and Joe, both 6-5, the tallest Razorbacks on the floor.

Musselman didn't make another lineup change the rest of the game as the five-guard lineup played the final 19 possessions on offense and 18 on defense.

It was the most that the five guards have played together this season.

In the Razorbacks' previous 12 games the quintet had been on the court for 14 possessions each on offense and defense according to Hoop Lens, a college basketball analytics website.

"It was a little risky," Musselman said. "Naturally as a coach ... when you have five guards out there, defense and rebounding is what you're concerned with.

The Aggies also missed a free throw on one of their last 18 possessions and didn't score over the final 3:35.

Arkansas' five-guard lineup didn't allow the Aggies to grab an offensive rebound, and the Razorbacks had four defensive rebounds, including three by Jones.

The Razorbacks led 50-48 when Bailey went to the bench and Texas A&M had three possessions in which it could have tied the score or taken the lead, but Arkansas got stops each time.

"I think they're all interchangeable," Texas A&M Coach Buzz Williams said of the Razorbacks' guards. "I think their games are very defined relative to how they're going to play. Regardless of what set [Musselman] calls, I think they can run them from all five positions.

"I just think they play position-less. They play with great spacing ... I think they know who's going to shoot what ball."

The game drew the first of five Saturday home sellout crowds for the Razorbacks and had an announced crowd of 19,200.

"The crowd's energy was insanely awesome," Musselman said. "I had a buddy in from the Bay Area and he said he's never heard an arena that loud in his life."

Williams said the driving ability of Jones and shooting range of Joe make it tough to guard them, and he praised Sills for being especially "pesky" on defense.

"He's done such a great job for us all year," Musselman said of Sills. "It's not often that when a player goes through a shooting slump -- which he did early in the year -- that you still play a guy 30-plus minutes. We're doing that because of all the intangible things he does for us.

"He is a pest for the opposing team and he's a tough-minded young man."

Musselman said the drought felt more like 30 minutes, but the Razorbacks (12-1) never lost the lead and won their 11th consecutive game at Walton Arena going back to last season.

"We give up a little size, obviously," Whitt said of the five-guard lineup. "But I felt like we were able to go out there and compete hard on defense and get rebounds when we needed to, make defensive stops when we needed to.

"Then on offense, it's hard to guard five guards because if they play a big there's a mismatch. We have guys who can shoot, get to the rim, drive."