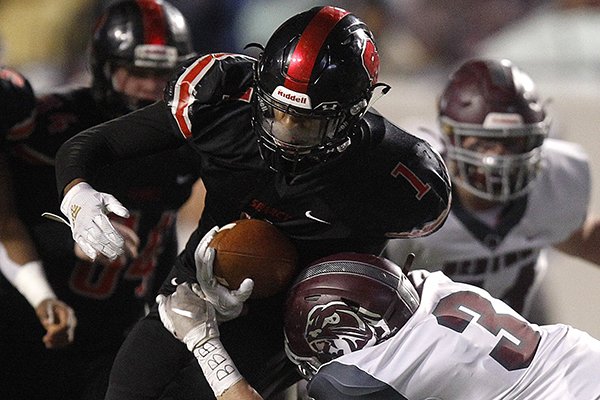 Searcywide receiver Marlon Crockett (1) runs the ball through Benton safety Gianni Vannucci (3) during the fourth quarter of Searcy's 28-27 win in the Class 6A state championship game on Saturday, Dec. 7, 2019, at War Memorial Stadium in Little Rock.

Searcy junior receiver/safety Marlon Crockett moved to Searcy from Texas and was a major reason the Lions were able to win the Class 6A state title in 2019.

“Moving in from Texas to Arkansas, it’s a big jump,” Crockett said. “We had a great team. I knew we were going to have great goals and we achieved it. So I really wan’t surprised that we won a state championship.”

He should see his recruiting heat up after recording 60 catches for 1,080 yards and 13 touchdowns and having 9 tackles with 2 pass breakups to help Searcy win its first state title since 1933. Crockett had 6 receptions for 139 yards and 2 tackles in a 28-27 victory over Benton in the championship game.

As a junior, he recorded 30 receptions for 448 yards and 6 touchdowns on offense, and had 85 tackles, 2 pass deflections, a forced fumble and 2 interceptions at safety.

He has offers from Kansas and Southern Miss, and is drawing interest from several schools, including West Virginia and Baylor. He received interest from the previous Arkansas staff and received a follow on Twitter from Razorback defensive coordinator Barry Odom on Tuesday.

Crockett is planning to make two visits in the near future.

“I’m going to the Kansas junior day,” Crockett said. “I was invited to the Southern Miss junior day .”

Most schools appear to be recruiting him as a receiver, but Crockett sees himself as an athlete.