Ire of the Tiger: LSU’s Wade asks for more from team 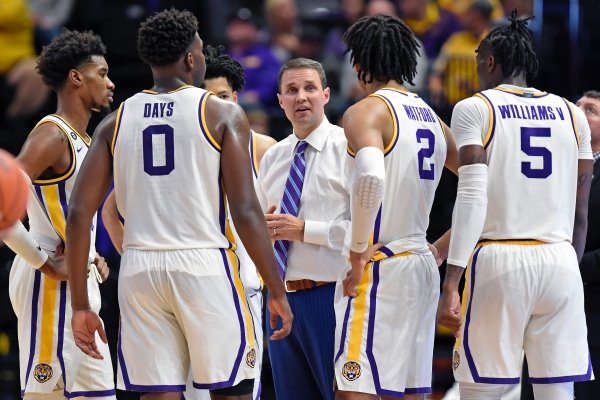 FAYETTEVILLE -- LSU Coach Will Wade had a stern message for his team after East Tennessee State -- coached by Southern Arkansas University graduate Steve Forbes -- came into the Maravich Assembly Center and beat the Tigers 74-63 on Dec. 18.

East Tennessee State is 13-3 and favored to win the Southern Conference, but the Buccaneers led LSU by as many as 23 points in stunning the defending SEC champion Tigers on their home court.

"This has major implications," Wade said in his postgame news conference. "We have got our backs against the wall for the next three months now."

But LSU's improved play hasn't caused Wade to change his approach going into the Tigers' game against the University of Arkansas (12-1, 1-0) at 8 p.m. Central on Wednesday in the Maravich Assembly Center.

"Our backs are still against the wall," Wade said Monday when he met with the media in Baton Rouge. "[Tennessee] was one win. We've won two games. We lost two in a row before that, now we've won two in a row, so alright.

"Our backs are against the wall from now until March. We better come out scratching, clawing. We've got a lot of work to do and a lot of areas to improve and get better.

"Skylar is very stable, consistent, reliable, dependable, and any adjective you would like to use," Wade said. "He has a presence on our team ... He's locked in and talkative. He's helping the guys out and really engaging with them, which helps all of our players."

Javonte Smart, a 6-4 sophomore, has started every game this season after starting 18 last season and is averaging 11.0 points and 5.1 assists. He led the Tigers with 21 points at Tennessee by hitting 7 of 14 shots, including 5 of 9 three-pointers.

"'J's been good. He's been real good," Wade said. "He's playing to his capabilities. He made shots at a high level in the Tennessee game, which obviously helped us.

"He's been playing extremely hard," Wade said. "We've got to keep him out of foul trouble, but he's so aggressive.

"He's a lot more skilled than people think. He's a good passer out of the post, he's made some jump shots and he does a great job finishing around the rim and screening. He's our best screener."

Williams fouled out in 22 minutes in the Tigers' 84-82 loss at Virginia Commonwealth and was limited to 17 minutes at USC and 20 minutes at Tennessee with four fouls. He has 34 fouls on the season.

Aside from the East Tennessee game, the Tigers' other three losses to VCU, Utah State and USC have been by combined six points. The teams to beat LSU have a combined 50-13 record.

"Obviously, we would like to have a few more wins, but our schedule sets up good and it's been what we needed it to be," Wade said. "We need some of these guys that have beaten us to win games.

"I think we just have to win, but we certainly are at where we need to be numerically. We are a contender at this point and we just have to play it out and be consistent."