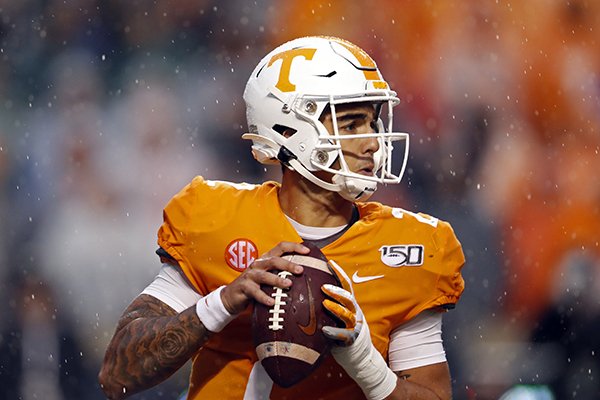 Tennessee quarterback Jarrett Guarantano (2) looks for a receiver in the first half of an NCAA college football game against Vanderbilt Saturday, Nov. 30, 2019, in Knoxville, Tenn. (AP Photo/Wade Payne)

LITTLE ROCK — The annual pooh-poohing of the oft-touted carryover from a bowl game might need some tweaking.

Tennessee’s statistically rare rally vs. Indiana and the youth on Vols’ roster prompted the admission that the spin by coaches and others could be accurate on occasion. Regularly, their take is that a bowl loss is motivation for the offseason and spring practice and a bowl victory is momentum for the next season.

Tennessee-Indiana was in the fourth quarter before the new remote was told to find “ESPN” — embarrassing considering the Gator Bowl had been recommended for those interested in a preview of Arkansas’ Oct. 31 opponent. The lame excuse for the memory lapse was that meaningful bowl games were historically before Jan. 2 and that the SEC’s best had already showed off against nationally-ranked Oklahoma, Michigan, Baylor, Virginia and Oklahoma State.

Tuning in, Indiana 22, Tennessee 9 with less than eight minutes to play prompted an immediate verbal seek and switch command.

The next morning, Tennessee 23-22 demanded a Google search for game info and a look at the Vols’ roster. The hours-old details and the glimpse at the future were equally interesting.

For starters, ESPN Stats and Info determined that 471 other teams trailed by 13 or more in the final five minutes this year and none won before Tennessee. The Vols scored with 4:21 to play, recovered an onside kick at their 46, and scored again in three plays.

Linebacker Quavaris Crouch lined up at running back and tallied the TD that cut the lead to 22-16, and running back Eric Gray scored the game winner from the 16. They are among the freshmen that make up more than one-third of the athletes on the Vols’ two deep that includes only a handful of seniors.

With that in mind, returning players can relate next fall if they trail in the fourth quarter and Tennessee coach Jeremy Pruitt tells them a comeback is doable. In fact, the final five minutes vs. Indiana is a snapshot of a season that began with losses to Georgia State and BYU and ended with six straight victories.

Along the same lines are the travails of junior quarterback Jarrett Guarantano. In and out of the doghouse this year, he was benched early in the third quarter vs. Indiana after the offense settled for three field goals. After sitting out one possession, he was instrumental in the rally, completing 7-of-11 for 91 yards in the fourth quarter.

Quarterbacks on the eight other SEC bowl teams also made news of one sort or another:

• Joe Burrow, LSU: His first half vs. Oklahoma in the College Football Playoff semifinals — 21-of-27 for 403 yards and seven touchdowns — reminds that a decline in the production and efficiency of the Tigers’ quarterback is inevitable this fall. Not even Joe Brady can mold the Tigers’ next quarterback into Burrow in one spring.

• Bo Nix, Auburn: He must be more productive running the ball for Gus Malzahn’s offense to be fully functional. The sophomore-to-be carried a half-dozen times or more in 11 games, but barely averaged three yards per try. In the Outback Bowl loss to Minnesota, Auburn ran only 53 plays and totaled 56 yards rushing.

• Mac Jones, Alabama: Jones’ 16-of-25 for 327 yards and three touchdowns vs. Michigan in the Citrus Bowl is more meaningful now that Tua Tagovailoa has decided to enter the NFL draft. Still, Jones will compete against a Tagovailoa —Tua’s younger brother Taulia.

• Jake Fromm, Georgia: About 48 hours after Tagovailoa announced for the draft, so did Fromm, who was 36-6 as a starter with one league championship and three SEC East titles. Prior to the Sugar Bowl rout of Baylor, he had completed less than 50 percent in five straight games.

• Kyle Trask, Florida: A two-star coming out of high school, the redshirt junior took over in September and led the Gators to an 8-2 record, including the Orange Bowl victory over Virginia. Previous starter Feliepe Franks is transferring, but despite Trask’s success, his job is not secure.

• Garrett Shrader, Mississippi State: Announced as the starter for the Music City Bowl, Shrader but didn’t play in the loss to Louisville and his unavailability reportedly contributed to the decision to fire Joe Moorhead. Supposedly, Shrader missed the game because he suffered a broken eye socket in a fight with a teammate.

• Lynn Bowden, Kentucky: The converted wide receiver completed two fourth-down passes, including one for a go-ahead touchdown with 15 seconds to play, in the final four minutes of a 37-30 victory over Virginia Tech in the Belk Bowl.

He also ran 25 and 61 yards for TDs. Some Arkansas fans might remember that Bowden made his first start at quarterback in October and carried 24 times for 196 yards and two touchdowns vs. the Razorbacks.

• Kellen Mond, Texas A&M: The junior looked like a complete quarterback vs. Oklahoma State in the Texas Bowl, completing 13-of-19 and carrying 12 times for a career-high 117 yards. The only other time Mond topped 100 yards rushing was in 2017 vs. Arkansas.