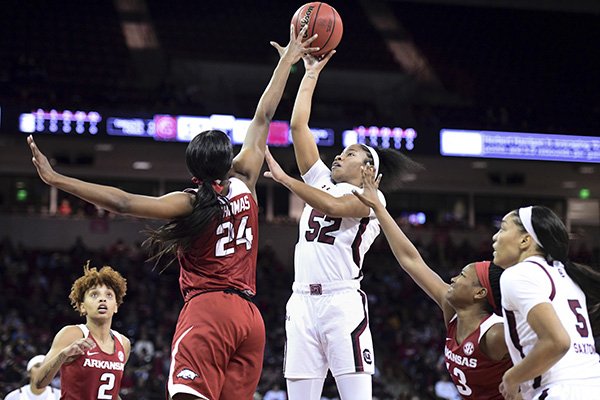 COLUMBIA, S.C. — South Carolina put the clams on Chelsea Dungee and cruised to another win.

Zia Cooke had 21 points, Aliyah Boston added 19 points and a career-high 25 rebounds and the fourth-ranked Gamecocks cleared another significant hurdle in its quest for a Southeastern Conference championship by topping No. 21 Arkansas 91-82 on Thursday night.

The Gamecocks (15-1, 3-0) used a stingy defense to slow down Dungee, the Razorbacks star guard and one of the SEC’s best scorers.

Dungee racked up 63 points in two games last season against South Carolina but was held in check for most of the game. She began the night 0 for 11 from the field with three airballs. She came in averaging nearly 20 points per game but didn't score her first field goal until the third quarter and finished with 14 points.

“This matchup is a hard matchup because Dungee really isn’t a post player. (Herbert Harrigan) took the challenge on Tuesday, and that’s the reaction we wanted to get out of her,” coach Dawn Staley said. “I thought she did a great job of staying in front of her and staying long.”

The Razorbacks never quit fighting, even after the Gamecocks’ superlative first and third quarters. They cut what was a 25-point lead to nine in the fourth quarter before running out of time.

“Proud of our kids for surviving the punches in the first and third quarters, and staying in the game,” coach Mike Neighbors said. “You stay with your kids, you don’t slow them down. If we slow down, we’re going to get beat by 30 there.”

That’s what had Staley cautioning that her team wasn’t where it really needs to be — at least not yet.

There was fatigue, there were some bad shots, but the Gamecocks quit answering and Arkansas made them pay.

“We’re able to put teams away and if you’re fortunate to build a big lead, you should be able to finish them off,” Staley said. “It’s hard against a team like Arkansas, especially if you don’t stay locked in.”

Arkansas: The Razorbacks, who parlayed last year’s strong postseason run into a 12-1 start this year, remain searching for a signature win. They’ve lost to California, Texas A&M and South Carolina and don’t have a real resume-booster, although if they finish in the SEC’s top six, they should reach the NCAA tournament.

South Carolina: Coach Dawn Staley said she “refused to drink the Kool-Aid” after the Kentucky win, but she may be at least sipping from the cup. Her team is young but tremendously talented and has beaten five of its six Top 25 opponents this year.

Arkansas shouldn’t be punished in the AP Top 25 after losing to a top-five team on the road, but the Razorbacks have lost two of their last three games.

South Carolina may rise in the poll as long as it wins on Sunday. Top-ranked Connecticut lost to Baylor Thursday, and if the Huskies fall out of the top three, the Gamecocks should naturally move up.

STAT OF THE NIGHT

Boston came up one rebound shy of tying the program record of 26 rebounds, set in 2008. She posted her career-high of 14 in the first half and kept finding herself under the basket as USC shots were just missing.

“I didn’t really know until the end of the game how close I was,” Boston said.

“She may be bigger than everybody else, but that doesn’t mean the ball falls into her hands,” Staley said of her freshman star. “She’s got to go get it. But she understands the game.”

Arkansas hosts Missouri on Sunday. The Tigers are suffering through a miserable 4-12 season but did beat LSU last week.

South Carolina travels to Vanderbilt Sunday afternoon. The Commodores, winners of only seven games a year ago, are experiencing a resurgence with 12 wins this year.